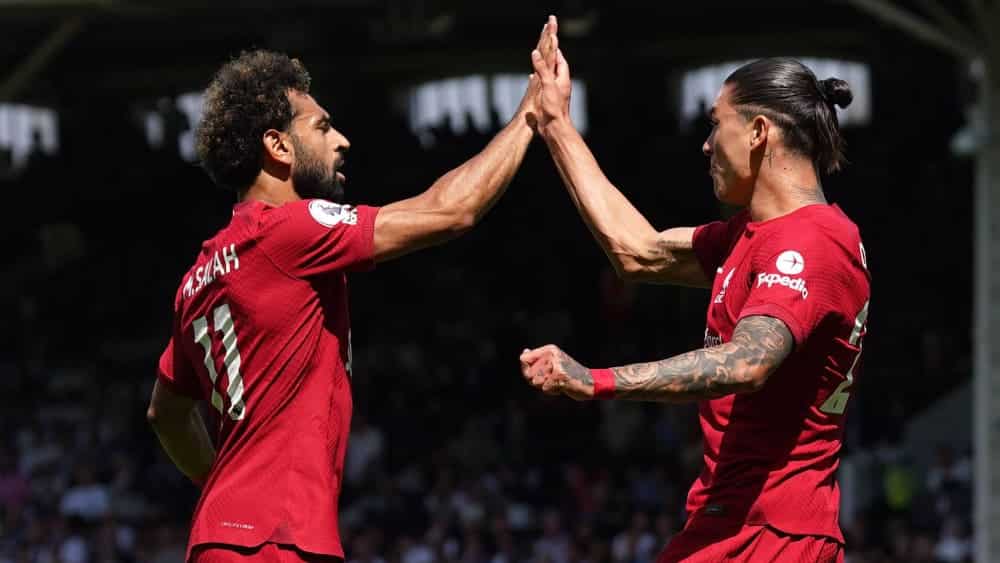 Surprise at Craven Cottage: Liverpool FC had to settle for a 2-2 draw at promoted Fulham in their Premier League season opener. The Reds had problems with Mitrovic & Co. for a long time, but Darwin and Salah rescued a point for Klopp’s team.


Fulham FC, with new signing Leno on the bench and Rodak in goal, started better and caused Liverpool problems with high pressing. The Reds could hardly get out of their half at first and were lucky in the first minute when Mitrovic missed the goal.

It was only after a quarter of an hour that Klopp’s side, with Roberto Firmino again preferred to new signing Darwin, found their feet. It was then that Luis Diaz scored what was supposed to be the 1:0 but was whistled back for offside (15th). Nevertheless, Fulham remained dangerous offensively, with new signing Pereira’s cheeky corner hitting the outside of the net (29th).

A little later Alisson, Liverpool’s only new player after the 3:1 against ManCity in the Community Shield, was beaten: Fulham’s goal scorer Mitrovic (43 goals in the Championship) beat Alexander-Arnold and headed in for the lead (32nd).


The Reds were deservedly behind, even though they complained about a perceived foul on captain Henderson when the goal was scored. Often they acted too inaccurately and looked surprised by the pressure of the opponent. Only Luis Diaz provided a positive sign when his shot hit the post (39.).

Shortly after the break Klopp had seen enough and brought on Darwin for Roberto Firmino, Elliott also coming on for the stricken Thiago (51st). After Liverpool were lucky when Kebano hit the post (57th), the Reds slowly found their usual game with the fresh forces.


Darwin was an asset, as he had been against the Skyblues recently – and he also provided the equaliser: First he failed to beat Rodak with a back-heel (61st), but with the same finish the Uruguayan found a way past the keeper. In the 64th minute, the ball hit the crossbar and Liverpool were back. This time Salah was the provider.

Liverpool’s new number 27 was involved in almost every attack, but suddenly the whistle blew on the other side and Fulham were awarded a penalty. Mitrovic had gone down after a contact with van Dijk, the decision was not wrong (70.), and the fouled man finished confidently from eleven metres (72.).