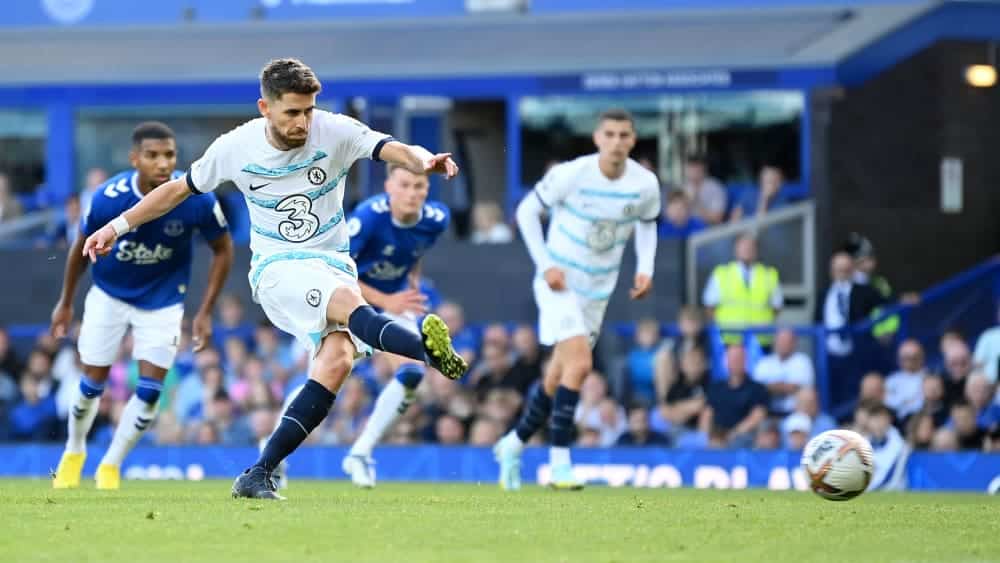 Chelsea FC started the new Premier League season with an away win. Against former coach Lampard and Everton FC, a penalty was enough to cap off a mixed performance with three points

Against his former club, Everton coach Frank Lampard fielded two Burnley signings, McNeil and Tarkowski, while Thomas Tuchel’s Chelsea had Sterling, one of the few summer additions, in the starting line-up alongside international Havertz, and Koulibaly, another purchase, started in defence. Werner, on the other hand, was not in the squad, the striker missing through injury.

The opening phase was overshadowed by Godfrey’s serious injury. The defender had to be treated for minutes and was taken off the field on a stretcher (18th). The Toffees then had their first good chance through Tarkowski, but Mendy made a diving save (24th). Chelsea, on the other hand, were struggling and, despite controlling the game, failed to create any dangerous finishes and repeatedly ran into dangerous counter-attacks which the hosts were unable to exploit.

When the Blues did get a chance, the ball was in the net: Sterling dusted off Kanté’s shot from the edge of the box, which Pickford allowed to bounce forward (43rd). The Manchester City newcomer, however, was offside when he shot and the goal was disallowed. A little later, however, it worked: In the nine minutes of injury time, Doucouré brought down Chilwell in the penalty area, and Jorginho calmly slotted the justified penalty into the net (45:+9).

The Toffees got the better start in the second half, first through Gray (48th), then through Doucouré (52nd). The Blues, however, got off lightly and were able to level the match again. In a weak game, it became dangerous again in the final phase – again in front of the Blues’ goal – when substitute Alli did not know how to use an assist from Patterson (73rd).


In the closing minutes, Chelsea’s new signing Cucurella added momentum to the game, setting up Sterling in front of goal after a one-two. His close-range finish was saved by Everton left-back Mykolenko (83rd). In the ten minutes of injury time, the Toffees were unable to shake the Blues’ lead. Thus, at the end of a mixed game, the 1-0 victory of the Tuchel eleven had stood.