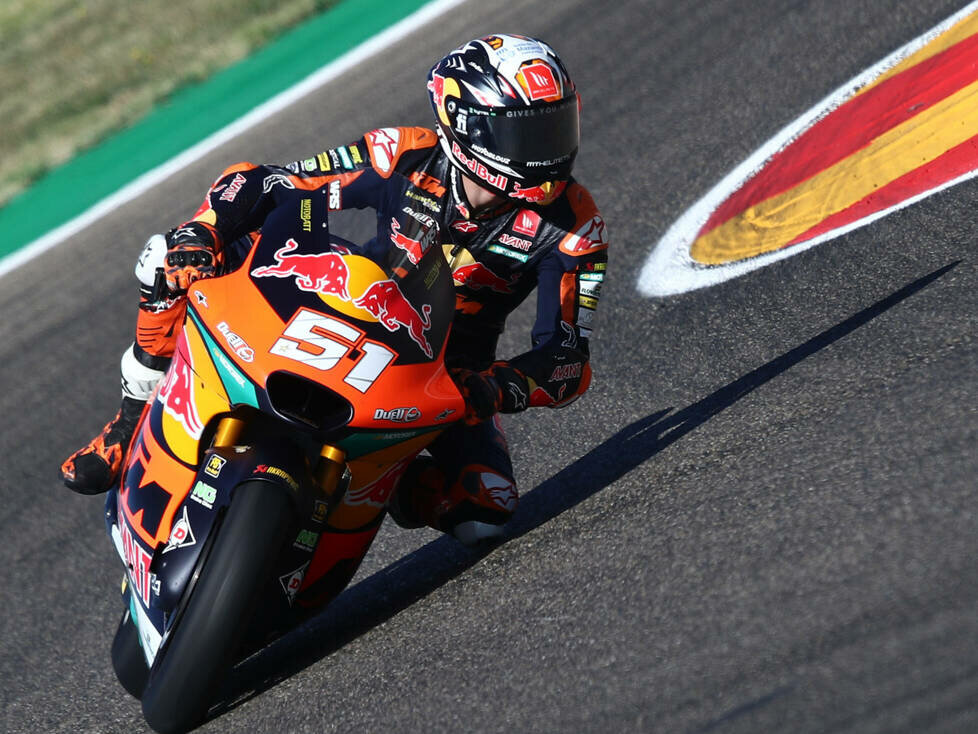 Rookie Pedro Acosta takes his next win in the intermediate class – With Aron Canet and Augusto Fernandez, three Spaniards are on the podium

Finally,” cheered Acosta. “After the injury, I’m back here now. In Austria it actually didn’t go too badly. Misano was a bit more difficult for me again. But here I had a good feeling from the start and thought it could work out.”

At the start of the 21-lap race, Augusto Fernandez won the holeshot. Behind him, things got tight at turn 2. Alonso Lopez (Boscoscuro) was carried too far to the outside and crashed into the gravel. Behind him chaos broke out. Marcel Schrötter was involved.

The German crashed before turn 3 and was also out. At the end of the first lap Fernandez was already leading by four tenths of a second ahead of Jake Dixon, Aron Canet, Acosta and Albert Arenas. Celestino Vietti was the only rider on the soft rear tyre and was 15th.

In lap 2, Arenas said goodbye to the leading group due to a crash in turn 12. Behind him, there was a crash between Jeremy Alcoba and Manuel Gonzalez at the same spot. Arenas was lucky not to be hit by anyone in the gravel.

Augusto Fernandez is quickly caught up

At the front, Fernandez stepped on the gas. After four laps, the Spaniard was already a second and a half ahead of the chasers Dixon, Acosta, Canet, Tony Arbolino and Ai Ogura. Acosta attacked and snatched second place from Dixon on lap 4.

At this point Fernandez already had a two-second lead over his teammate Acosta. But the rookie was quicker and quickly nibbled away the gap. Canet allowed himself to be pulled along by Acosta in third.

On lap 8, Acosta made a small mistake in turn 9. Canet overtook. Nevertheless, both continued to make up ground on Fernandez. One lap later Fernandez was caught and the Spanish three-way battle for the lead was on. Arbolino also managed to catch up.

On lap 10, Acosta passed Fernandez on the long back straight and took the lead. Behind, Arbolino and Canet dueled for third. As a result, the Ajo duo at the front did their laps. Canet edged out Arbolino, who made small mistakes.

Acosta eventually had more pace than Fernandez. With eight laps to go, Acosta opened up a one-second lead. Fernandez was forced to go to the back of the pack, as Canet was also faster than him.

Acosta had everything under control in the final quarter of the race and rode to his second Moto2 victory on home soil in commanding fashion. The duel for second place remained exciting. Three laps before the end, Canet caught Fernandez in the wrong corkscrew.

That was also the decision in the duel for the remaining podium places. “The race was really difficult,” Canet breathed. “At the beginning I was fighting with Arenas and Arbolino. I lost quite a lot of time there. “

“In the last four laps I managed to overtake Augusto [Fernandez] and pull away a bit. I am now 37 points behind the leader in the WRC and 30 points behind Ogura. We are working really well and we will just keep doing that. “

“Of course I would have liked to win the race, because I had a good feeling. But Pedro was simply stronger. In the final phase the tyre lost a lot of grip. I knew then that today was not the time to take risks. I have to be satisfied with third place. “

@AiOgura79 knows how to get it done on Sunday!

Arbolino was narrowly beaten by Ogura in the final round to finish fifth. Dixon was eliminated on the last lap due to a crash in turn 12. Fermin Aldeguer was sixth, followed by Somkiat Chantra, Jorge Navarro, Joe Roberts and Vietti.

The next Grand Prix will take place next Sunday in Motegi (Japan).