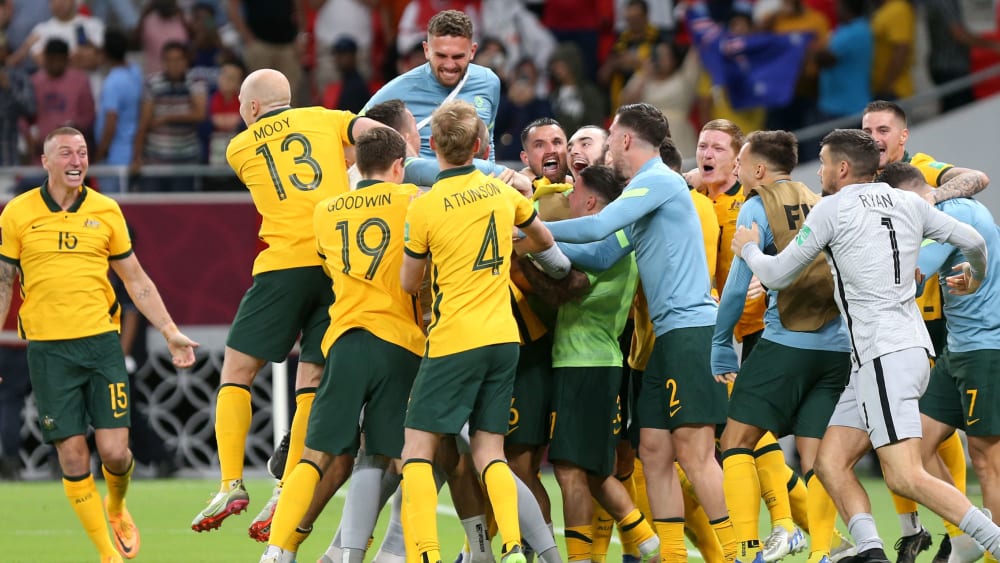 Australia secured their penultimate World Cup ticket against Peru from the spot. After a goalless draw, goalkeeper Redmayne, who had been specially substituted for the penalty shootout, held the decisive spot kick.

The World Cup group opponents for France, Denmark and Tunisia were sought in Qatar. Both the Australians, with Hrustic (Frankfurt), Irvine (St. Pauli) and Leckie (former Hertha) in the starting eleven, and the Peruvians wanted to fulfil their dream of a sixth World Cup finals.

The balanced statistics were also reflected on the pitch. Both teams limited themselves to making no mistakes and defended deep in their own half when in possession of the ball. For this reason, an uneventful first half developed, in which much took place in midfield. The opponents also showed a similarity in their offensive alignment: The only way into the opponent’s sixteen was through the right wingers Boyle and Carrillo.

With no chances being created from play, the first approach to goal came from a corner kick. Irvine headed Mooy’s cross over the goal (16th). But the midfielder, who had already scored the opening goal in the 2-1 win over the United Arab Emirates in the 4th round of the Asian World Cup qualifiers, kept looking for his way into the penalty area. But as his second header also failed to fly onto the goal (38th), it remained goalless in the first half.

The South Americans, who had already sworn in on the pitch after the final whistle of the first half, took control of the game after the restart. Despite their superiority, Ryan did not even have to intervene. Cueva missed the best chance to take the lead from an acute angle – the left-winger only hit the outside of the net (68th).

Behich and Hrustic have the decision on the foot

The game continued to be a bit of a slog until Australia suddenly took a risk in the closing stages. They were almost rewarded for their efforts, but Behich’s shot flew just wide of the right post (84th) and Hrustic failed to beat Gallese (88th).

Flores misses the lead by inches

Now Peru were closer to taking the lead: however, Cueva missed again (106th) before Flores was inches short of 1-0 just a minute later – his header smacked against the right post. Afterwards, the players were feeling the strain of the duration of the game, so that the match had to be decided from the spot.

But before that, Australia coach Arnold Graham had an idea: he changed the goalkeeper shortly before the end and brought on Redmayne for Ryan – a move that would pay off.

But first there was a scare as Boyle missed the first penalty kick. As the Socceroos’ other four shooters scored and former Hoffenheim player Advincula put his shot against the post, the sixth shooters each decided the game. While Mabil scored, Redmayne, who irritated Valera with a jumping jack before shooting, held the decisive penalty.

This will be Australia’s fifth consecutive trip to the finals. They will face defending champions France, Denmark and Tunisia in the group stage. Peru, on the other hand, missed out on their sixth World Cup finals after participating in 2018.