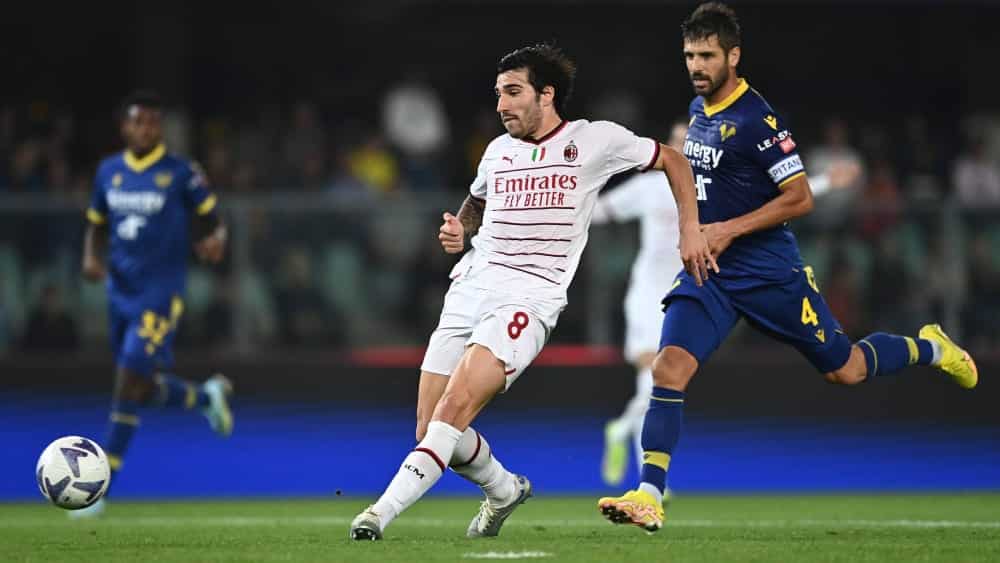 Ac Milan did their duty in Verona and beat Hellas 2:1. The slightly better team, however, were actually the home side, who would have deserved a point. Tonali’s late goal secured the full three points for the favourites.

Verona’s new coach Salvatore Bocchetti made two changes from the 2-1 defeat to US Salernitana, with Magnani and Faraoni replacing Ceccherini and Doig in the first eleven. Milan coach Stefano Piolo changed his starting line-up in just one position after the 2-0 Champions League defeat to Chelsea FC, with Adli coming on for Bennacer.

Hellas scores at the back and up front

While Hellas started bravely, running Milan high and causing AC some problems in the opening minutes: But it didn’t take long for AC to take the wind out of the home side’s sails. After a ball was lost in midfield, Rafael Leao picked up the ball, went turbo on the left wing and crossed into the sixteen. Miguel Veloso was unfortunate enough to push the ball into his own goal (9th minute).

Hellas looked shocked and soon after allowed the next chance. Leao set up Giroud, who found himself alone in front of Montio. The Frenchman’s sensitive lob overcame the keeper, but also bounced just past the right post (11.). On the opposite side, Verona had their first real attack – and were promptly rewarded. Günter’s shot from the left corner of the penalty area would have been easy prey for Tatarusanu, but Gabbia deflected the ball unstoppable (19th) – 1:1.

The game flattened out a bit, also because with the exception of the industrious Leaos, none of Milan’s offensive players had any sparkling ideas. Verona had hardly any problems defensively and waited patiently for gaps in the AC backline. Shortly before the half-time whistle, Günter headed in from a corner and almost took the lead from four metres, but could not get the ball into the Milan box (45th). So it went into the dressing rooms with the draw.

After the break, the action on the pitch was intense and both teams came onto the pitch with open sights. Pioli made two changes, bringing on Origi and Rebic for Giroud and Brahim Diaz. The first chances were not long in coming: first Hrustic flicked the ball just past the left post (48th), then Theo Hernandez set up Joker Rebic, but the ex-Frankfurter failed to beat Montipo from close range (50th).

Piccoli on the aluminium – Tonali ice-cold

Milan quickly ran out of ideas, as they had in the first half, and Verona stood firm at the back and were always able to pinprick the ball. The best chance of the second half came from Piccoli, who jumped highest three minutes after his substitution and nodded the ball onto the underside of the crossbar (57th). A little later, the Joker had another chance, but his volley was harmless (65).

The final phase began, Verona had been the better team for long stretches of the second half – and then was caught ice cold. AC played out a counterattack, Rebic served Tonali from the right wing with a sensitive pass into the deep. The midfielder kept his cool in front of Monipo and slipped the ball through the Hellas keeper’s braces (81st minute).

Hellas threw everything forward in the final minutes and almost equalised through Depaoli. But the substitute Thiaw threw himself into the shot from point-blank range and prevented the points from being shared. The game ended 2-1 – bitter for the home side, who deserved at least a point but suffered their fifth defeat in a row.