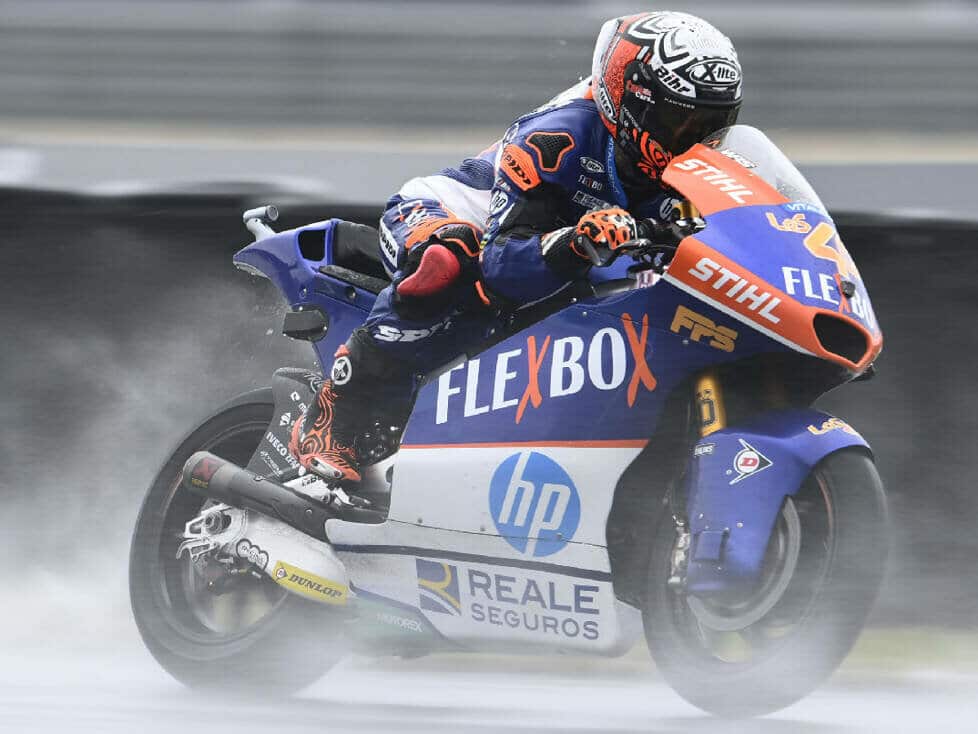 In a qualifying session that had to be interrupted for a long time due to heavy rain, Aron Canet secured his third pole position of this Moto2 season. The Kalex rider relegated his brand mates Jake Dixon and Tony Arbolino to second and third at Motegi by a wide margin.

Before his pole success, however, Canet first had to go for it in Q1. Sam Lowes, Celestino Vietti and Marcel Schrötter also featured in the first qualifying section. Schrötter’s team-mate Jeremy Alcoba caused an early crash in turn 4. A little later, Lowes, who was already struggling, was also hit.

He is still struggling with his arm and shoulder after a long injury break. He was catapulted over the handlebars once in the Q1 crash, but seemed to be okay.

A big crash on his return @SamLowes22 get’s sent over the handlebars but hopefully this hasn’t harmed his healing shoulder ⚔️JapaneseGP pic. twitter.com/x3is07DOR0

In the standings, Lowes was third at the time of the crash, but then dropped back to tenth. Canet topped the session. Barry Baltus, Keminth Kubo and Cameron Beaubier secured the remaining places for a late Q2 entry.

Schrötter couldn’t get past seventh place in Q1. That means 21st on the grid for tomorrow’s race. He was more than half a second off the last Q2 place. Vietti also got stuck in Q1 after his crash. He will have to start from 22nd place tomorrow.

The weather has brought a halt to Q2, Aron Canet leads as it stands ☔️JapaneseGP pic.twitter.com/QImi9t1xFi

As the second qualifying section began, the conditions deteriorated. More and more water was collecting on the track. Thunder and lightning could also be heard and seen. At first, the pilots tried to brave the weather, but with just under ten minutes left, the red flag was waved.

A long interruption followed. It was not until an hour and a half later that the race resumed. The time to beat was 2:07.503 minutes, which Canet had marked before the red flag.

In fact, it became significantly faster once again. Canet himself beat his own best time by more than two and a half seconds, beating Fermin Aldeguer, who had pushed him out of the lead in the meantime. In the end, however, the two were separated by a good three-tenths of a second.

Heartbreak after brilliance for @Aldeguer54

His P2 lap time has been scrubbed off due to yellow flags and will start from P6 ⚔️JapaneseGP pic. twitter.com/N2nXVDSqPN

However, Aldeguer lost his fastest lap due to yellow flags and dropped back to sixth. Dixon moved up to second, but was already 0.730 seconds behind. Tony Arbolino completed row one. Behind them, Somkiat Chantra Filip Salac and Aldeguer qualified for row two.

Update 10:30am: Race control changed their minds after all and gave Aldeguer back his fast lap. As a result, the Boscoscuro driver moves back up to second on the grid on row one. Everyone behind him loses a position.