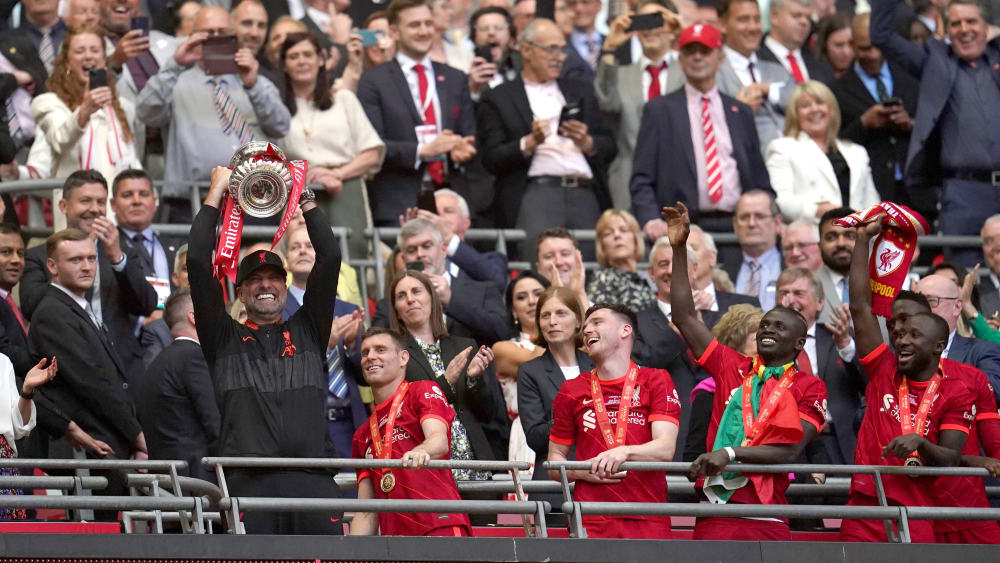 Chelsea and Liverpool FC met in the FA Cup final at Wembley – with the better end for the Reds, who can continue to dream of the quadruple – but are worried about Salah.

There were hardly any changes at Chelsea. Only Thiago Silva was new in Thomas Tuchel’s team after the 3-0 win at Leeds United, Christensen was not in the squad. Neither was the German international Havertz. Midfielder Kanté, who had been injured recently, was back on the bench.

From kick-off, Liverpool took control. Luis Diaz was an asset, the Colombian dribbling his opponents dizzy. Thiago (4th) missed a cross from the winter newcomer from Porto by a hair’s breadth and Luis Diaz himself missed against Mendy (8th). Chelsea, on the other hand, did not get going in the early stages. Pulisic’s dangerous finish was the first of note (23rd).

Salah goes off with a knock – Marcos Alonso hits the aluminium

Chelsea nevertheless became more confident as the game wore on and began to successfully defend against the Reds’ pressing. Marcos Alonso had a good chance but failed to beat Alisson (27th) and Lukaku was too sloppy after a Thiago miss (41st). For Liverpool, it came thick and fast in another way: Salah suddenly sat on the ground after about half an hour and had to leave the field in tears a little later (33.). His replacement Diogo Jota had the last good chance of the first half (45.).

The second half began with an exclamation mark: Marcos Alonso cheekily hit the crossbar with a free kick from an acute angle (48th), Pulisic also failed to beat Alisson (47th). As a result, the number of goals increased again, but it was hardly dangerous. It was obvious to both teams that they were overplayed. The final was also characterised by the amount of missed chances. Time and time again, both teams shot at the goals but just missed. James (68th) on one side and Luis Diaz (69th) on the other provided showpieces within seconds of each other.

Liverpool hit the post twice just before the end

The game got really hot in the final stages of normal time: Liverpool suddenly came very close to taking the lead, with Luis Diaz (83rd) and Robertson (84th) both hitting the post in quick succession. The latter should have scored the 1:0. Despite the pressure of the Reds, Luis Diaz did not manage to do so either with his beautiful shot (90th).

Meanwhile, the extra time was quickly told. In both halves, both teams had plenty of possession, but there was a lack of goals. After more than 120 minutes without a goal, the FA Cup final had to be decided in a penalty shoot-out.

Azpilicueta, Mané and Mount miss – Tsimikas is on hand after Alisson’s save

In this one, captain Azpilicueta only hit the post for the third penalty, despite being an extra substitute. Otherwise, the penalties were converted quite safely – until the Senegalese duel between Mané and Mendy, which the keeper won on the tenth penalty.

Nevertheless, there were not many attempts from the spot afterwards: Chelsea’s own Mount took the 13th penalty too casually and Alisson parried – the perfect set-up for Tsimikas, the wild card from Greece scored to the Reds’ jubilation. Once again Liverpool were the winners on penalties against Chelsea. The quadruple is still within Liverpool’s reach, while Chelsea lose their third FA Cup final in a row.