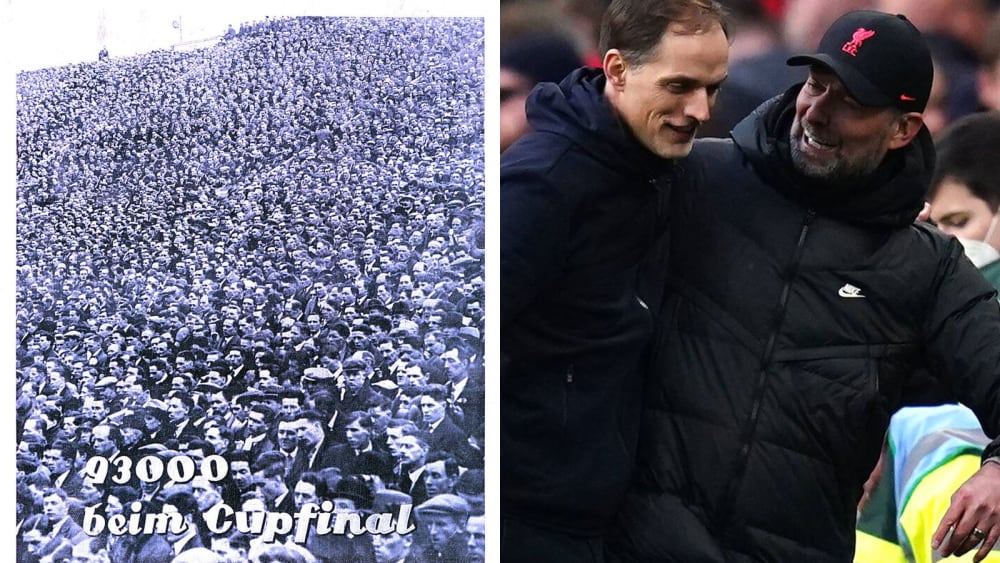 When Liverpool and Chelsea face each other again at Wembley this Saturday, the world’s oldest cup competition will celebrate its 150th anniversary. For the first time, a German coach will win the English Association Cup and make history – like Wimbledon 34 years ago to the day.

In Plough Lane in south-west London, right on the border with the borough of Wandsworth, stands the pride and joy of AFC Wimbledon, the football club revived by its fans and members in 2002. The eponymous stadium, rebuilt in its old home, encompasses a narrow space; accessible to anyone who has entered the club’s small shop. Caution is advised there. Because when John, the explainer, narrator and overseer, gets up from his little chair to cheerfully tell visitors about the old days, it may well be that he has simply left one of his glasses on the floor. There is no room for a table. So it’s better to look down, too, and not just at the precious mementos in the showcases and on the walls.


The museum room of the football club from the tennis mecca bears witness to a sensational success. On 14 May 1988, the then Wimbledon FC, who had finished a surprisingly strong First Division season in seventh place in the table after an eleven-year march through from the amateur leagues, won the FA Cup. So this Saturday it will be exactly 34 years since the stark underdogs beat heavy favourites and champions Liverpool FC 1-0 at the old Wembley. Like this: Lawrie Sanchez heads a Dennis Wise free-kick cross into the Reds’ goal in the 37th minute of the game. After that, Wimbledon kept it tight in front of 98,203 spectators – and goalkeeper Dave Beasant saved a penalty kicked by Liverpool’s goalscorer John Aldridge after an hour of play. It was the first time a goalkeeper had saved a penalty in an FA Cup final. The team around Vinnie Jones and John Fashanu – Beasant is their captain – goes down in history as the “Crazy Gang”. Lady Diana presents them with the silver trophy.

On 14 May 2022, it’s blue against red again. 150 years after the very first final for the English Association Cup, the mother of all football competitions, Liverpool will be in the final again, against Chelsea FC. Wimbledon have just been relegated to the fourth division of League Two.

History will be made again, that is certain even before kick-off. With Jürgen Klopp and Thomas Tuchel, two German coaches are facing each other for the first time. With Kai Havertz, Timo Werner and Antonio Rüdiger in the Blues’ jersey, three German internationals are also in the thick of the action. Klopp or Tuchel – whose captain will receive the Cup from the hands of Prince William?

“Cup Final Day” – it was like a bank holiday for many decades. In the United Kingdom, the clocks seemed to stand still for a moment on that Saturday afternoon: The fans of the finalists out of their minds, the others, not only those interested in sport, at least in front of the radio or television set.

The Sportschau once solemnly reported on the FA Cup Final

The sustained final anthem “Abide with me” is heard before the equally obligatory “God save the Queen”. A member of the royal family paced the two starting rows, exchanging a few friendly words with long-haired (or later shaven-headed) professionals, not all of whose names he knew: images that repeated themselves with reliable familiarity and yet always added to a new, expectant tingle.

They were solemn commentaries with which the commentators on ARD’s Sportschau accompanied the most important scenes from the hallowed turf and from the stands for the German-speaking audience. Today, the game is played too late for appetisers in the public service early evening programme. DAZN, on the other hand, is streaming the entire live programme and, as with this season’s supposedly minor League Cup final, can look forward to a pairing that could also be a Champions League final: Chelsea versus Liverpool. There can be no big surprise with this constellation, however.


At the same time, this original cup, the FA Cup, has created exactly that and revived it again and again: the idea that the David can defeat the Goliath. A beautiful idea that is still inherent in the team sport of football in 2022, especially in cup and knockout mode. From the third round, when the top clubs traditionally make their debut on the first weekend of January, to the day the crowds throng to Wembley Way in north-west London.

From England, from where the initially condemned “footloaf” had come to Germany, the kicker reported regularly and admiringly, even downright reverently, right in its early years. The “Cup Final”, an expression of a mass phenomenon, especially among the British working class, made its mark on the cover in 1925 (Sheffield United v Cardiff City 1:0) and 1928 (Blackburn Rovers v Huddersfield Town 3:1) with photos that testified to enormous fan interest.

In 1923, Police Constable George Scorey on his white horse Billy had saved the event by prudently pushing the crowd off the pitch at Wembley Stadium, which was packed with well over 100,000 people. Bolton Wanderers’ encounter with West Ham United (2-0) became famous as the White Horse Final.

It had all started at Kennington Oval cricket stadium on 16 March 1872 when the Wanderers from the London Borough of Battersea beat the Royal Engineers 1-0.

Until this weekend’s 142nd final, the world’s oldest cup competition has produced many Wimbledons. Just look at Sunderland, who in 1973 became the first second division team to win, even more so against the then super team Leeds United (1-0). Or Southampton, who also beat Manchester United 1-0 in 1977, the last time Queen Elizabeth II graced winners – and losers – in person. Or at Arsenal, which won a total of 14 times from 1930 to 2020, making it the record holder.

Many more episodes of this kind could be added, but to keep the story short, congratulations will suffice here: Happy Birthday, FA Cup!