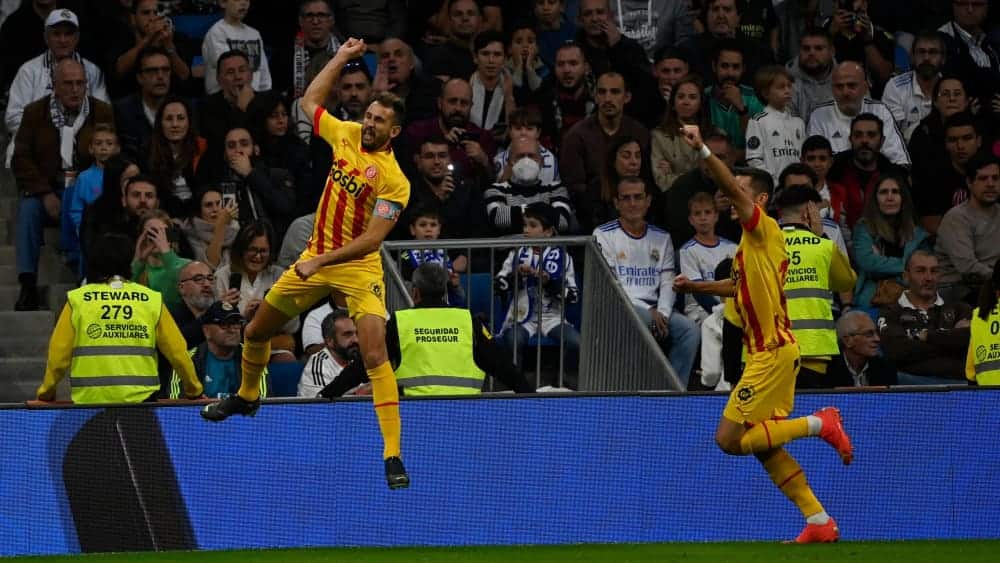 Real Madrid dropped points for the second time this La Liga season. In the 1-1 draw against Girona, the royals were awarded a penalty against them, which definitely doesn’t have to be given after VAR intervention.

The Madrilenians had to do without Ballon d’Or winner Benzema again, who signed off last week with a muscle fatigue and since then already missed the games against Sevilla (3:1) and in Leipzig (2:3, first defeat of the season). Thus, the attacking front three was formed by the two Brazilians Vinicius Junior and Rodrygo as well as the in-form Fede Valverde.

The roles were clearly distributed before the duel, but the first half was quite even, as the outsiders from Girona played really well. However, it was the royals who got off to the better start, coming close through Modric (2nd) and Rodrygo (9th). The promoted team was brave – and also had a really good chance, Fernandez nodded the ball just past on the left (19th).

Once each aluminium on both sides

The best chance in the first half went to Real, though, with Rodrygo’s powerful shot hitting the right post (23rd). After that, there was a bit of idle time before the promoted team had another great chance: Fernandez was robust on the left side against Carvajal and crossed to Herrera, who slammed the ball from eleven metres to the bottom of the crossbar (38th). Both teams were lucky with the aluminium, and the game went into the dressing room goalless.

Vinicius Junior puts Real on course – and then comes the VAR

After the break, Real did more for the game, but the champions couldn’t come up with anything creative going forward. That changed in the 70th minute when Fede Valverde broke through on the right and found Vinicius Junior, who scored from close range. They almost scored twice, but keeper Gazzaniga did well to keep out Asensio (72nd).

Madrid were on course and Girona did not seem to be able to come back. But then VAR intervened. Asensio had taken the ball first to the chest and then to the elbow after a corner, there was no sign of intent. Referee Mario Melero Lopez was sent to the review area and actually pointed to the spot, an extremely harsh decision against Real. Stuani didn’t care, he scored the equaliser (80th).

Real then ran furiously, Rodrygo even scored the supposed 2:1, but before that Gazzaniga had his hand clearly on the ball (89.). In the more than nine minutes of injury time, during which Kroos was shown the red card (90.+1), neither team managed to score again.