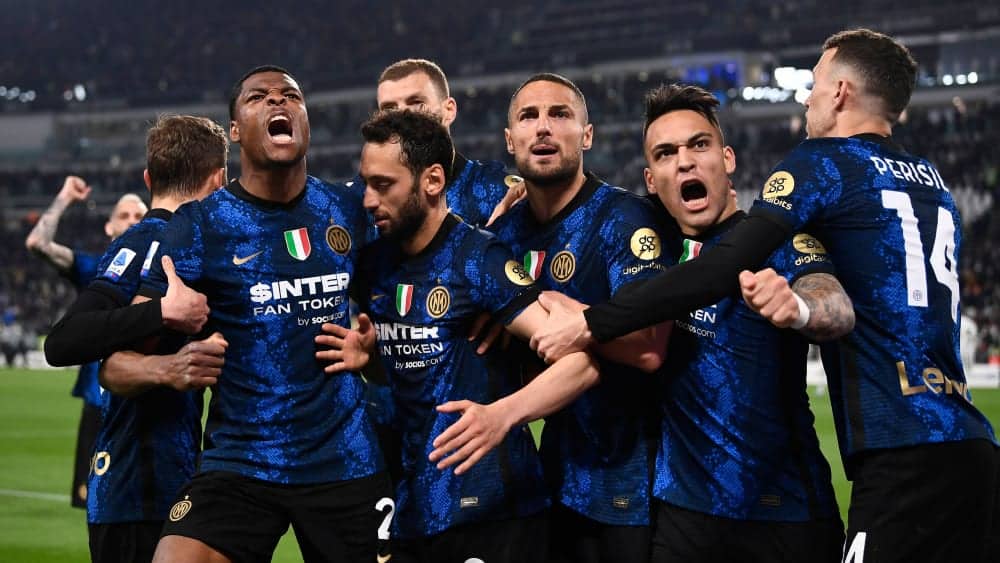 Juventus lose an intense derby d’Italia with 0:1 against the reigning champions Inter Milan, who not only put in a strong defensive performance towards the end but also bagged the three points thanks to double VAR intervention. Long faces at the Old Lady, meanwhile, as a very long winning streak comes to an end – and faint hopes are likely to be dashed

It is a well-known fact that the two traditional Italian clubs Juventus and Inter have played 177 Serie A matches to date. But number 178, in which both teams were able to field their best players apart from Bonucci on the Turin bench, stood out somewhat from the vast majority of previous encounters. For all that was offered to the audience at the Allianz Stadium, sold out for the first time since March 2020, did not fit a normal piece of paper.

The Bianconeri, unbeaten in 16 (!) Serie A games (eleven wins, five draws), started the game with an incredible storming and pushing phase, pinning Milan deep at the back and creating chance after chance. Vlahovic failed to beat goalkeeper Handanovic (1st minute), Morata missed his target (5th), Chiellini hit the underside of the crossbar from close range after Dybala’s shot and a short Handanovic save (8th), Dybala’s free-kick was saved by Handanovic (2nd) and Chiellini’s shot was saved by the goalkeeper (3rd). ), Dybala put a cheeky long-range shot only on the roof of the goal (11th), Cuadrado also despaired of Handanovic (15th) – and Morata failed to get the ball into the net from a slightly acute angle (16th).

The game then got tougher, with both sides giving each other nothing in the intense duels – including yellow cards and the substitution of the badly affected European champion Locatelli (head injury, turban, knee complaints).

Offensively, meanwhile, there was little from Inter apart from a dropped shot from Calhanoglu which Danilo was able to block (32nd). Until the 43rd minute, when things really got wild. First, Dumfries was hit on the foot by Morata, which led to a penalty after VAR intervention. Calhanoglu took responsibility for the penalty, but failed to hit Szczesny and then fouled Danilo, so that Rabiot’s own goal was not awarded (45.+1).


But once again the VAR intervened – and ultimately had the penalty kick retaken because Juve defender de Ligt had run in too early. So Calhanoglu grabbed the ball again and thundered it safely into the left corner a short time later (45.+5). In the end, the first extremely intense period ran ten minutes longer, with Vlahovic finishing again and just missing (45.+8).

Once again only aluminium for Juve

The second period was much more relaxed, but still offered highlights – especially on the Turin side. While the Bianconeri were always pushing via winger Cuadrado and wanted to claim the surely deserved 1-1, the Milanese machine focused almost exclusively on defending the narrow 1-0 lead.


And that almost went wrong for the reigning champions. First and foremost in minutes 52 (Dybala couldn’t find a taker near the five-metre area), 57 (Perisic saved from Dybala in the nick of time), 63 (Vlahovic’s flick missed by a whisker), 67 (Morata missed) and especially after 73 revolutions of the clock. Zakaria, who was brought over from Gladbach in the winter, had a great solo, finished precisely and only despaired at the fingertips of keeper Handanovic, who directed the ball to his right post.

Last but not least, Correa missed the possible 2:0 on the other side (82nd), while Dybala took a promising free kick too weakly and put it well over (90th). The Nerazzurri thus managed a narrow victory and are back in the championship race behind leaders Milan and their closest rivals Napoli. Juve, on the other hand, not only saw their recent run of 16 league games without a defeat come to an end, but also their faint hopes of having a say in the Scudetto after the record champions’ disastrous start to the season.