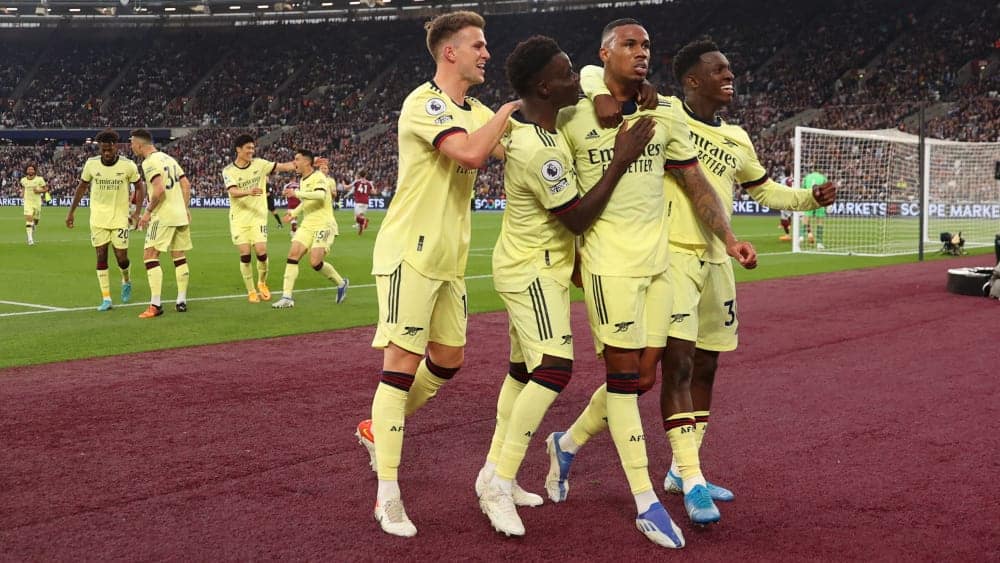 Two corner kicks secured Arsenal FC a win at West Ham United. The Gunners are back in a Champions League spot after the narrow win.

Mikel Arteta made three changes to his star-studded Arsenal line-up after the 3-1 defeat to Manchester United, with Tomiyasu, Holding and Martinelli replacing Cedric, White and Smith Rowe.

First half picks up late momentum

Both teams were compact against the ball and well organised in the first period, with the teams neutralising each other for long stretches. The only goal approach worth mentioning was a quick counter-attack by West Ham, which led to a blocked attempt by Lanzini through Coufal (30.).

However, the game then picked up pace and Nketiah challenged Fabianski before Holding converted the ensuing corner kick to take the lead (38th). The Hammers, for their part, narrowly missed an immediate response from a corner kick when Ramsdale reacted well to Rice (40). Nevertheless, the home side equalised before the break through Bowen, who scored with the last action before half-time (45th).

After the change of ends, the hosts dominated and had clearly more of the ball. The first highlight, however, came from the Gunners, who repeatedly took the lead after a corner kick, this time completed by Gabriel (54.). After the second goal, Arsenal started to counter-attack and let West Ham come.

However, the Hammers knew little to do with the bulk of the ball, while the visitors kept making pinpricks. Nketiah missed the decisive goal twice: First he missed the goal in the 72nd minute, then Fabianski saved a little later (79th). West Ham, on the other hand, did not manage to challenge Ramsdale and Arsenal kept the score at 2-1.


West Ham host Frankfurt in the Europa League second leg on Thursday (9pm) and Norwich in the league next Saturday (3pm). At the same time, the Gunners, who moved back past Tottenham into fourth place with the win, will host Leeds.