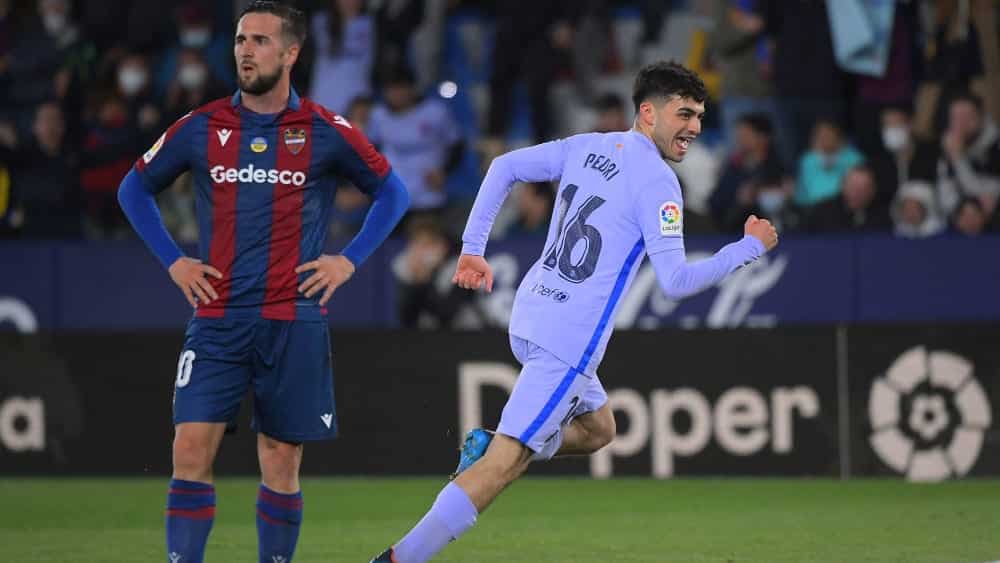 After the 1:1 in Frankfurt, Xavi did not feel like experimenting and gave his two youngsters in midfield (Pedri and Gavi) a breather before the second leg against Eintracht. Up front, Dembelé was allowed to start alongside Aubameyang and Ferran Torres.

But those who expected a clear-cut affair at the 19th-placed team were proved wrong. Levante, who had taken four points out of a possible six in Barcelona’s last two visits (3:3 and 3:1), played freely. Morales had the first good chance less than 30 seconds into the game when veteran Dani Alves made a bad mistake.

Barça were similarly erratic as they were for long stretches in Frankfurt last Thursday and offered much more defensively than offensively. Symptomatically, the visitors’ best chance before the break was initiated by keeper ter Stegen with a superb low drive – but receiver Ferran Torres shot too centrally in the penalty area (21st).

Garcia saves on the line – Aubameyang suddenly on the spot

Shortly afterwards it should have been 1-0 to Levante, but after Morales had duped the passive Dani Alves and Araujo, ter Stegen threw himself heavily into the shot – and Garcia saved the ball trundling towards goal inches from the line (26th).

After the change of ends, the game had a much higher entertainment value and produced five more goals. But first things first: After Ferran Torres had missed Barça’s best chance with his head (49th), Levante were awarded a penalty after a stupid foul by Dani Alves. Morales converted it safely (52.), but four minutes later – Garcia was guilty of a handball – he did not take a second kick.

A momentous decision, because Roger’s miss – ter Stegen had guessed the corner – tipped the game. Dembelé found the hitherto invisible Aubameyang a little later with a buttery cross, who headed powerfully into the right-hand corner (59th).

Xavi’s jokers make a big impact on the game

Shortly afterwards the game – and with it the course of the match – was turned on its head: Gavi and Pedri, who had been substituted by Xavi after Levante’s second penalty, combined to make it 2-1 (63rd). But the hosts did not give up and tried everything. And because Barcelona actually conceded a third penalty, the game was tied again in minute 83: Joker Lenglet stepped on his opponent’s foot two minutes after being substituted, which Melero took advantage of to make it 2:2.

The crunch time was an open game for both sides. Levante threw everything forward, but were punished in injury time: Luuk de Jong, another Xavi joker, was served perfectly by Jordi Alba and the former Gladbach player headed into the far corner (90.+2).

With the 3-2 win, Barcelona reclaimed second place from Sevilla FC. Direct Champions League qualification is drawing ever closer. And should they not succeed via the league, there would also be the possibility of the Europa League title.

But for that to happen, they will first need a defensive improvement next Thursday when Eintracht Frankfurt visit Camp Nou with huge fan support from home.