Ancelotti on “hara-kiri” tactics: “I failed” 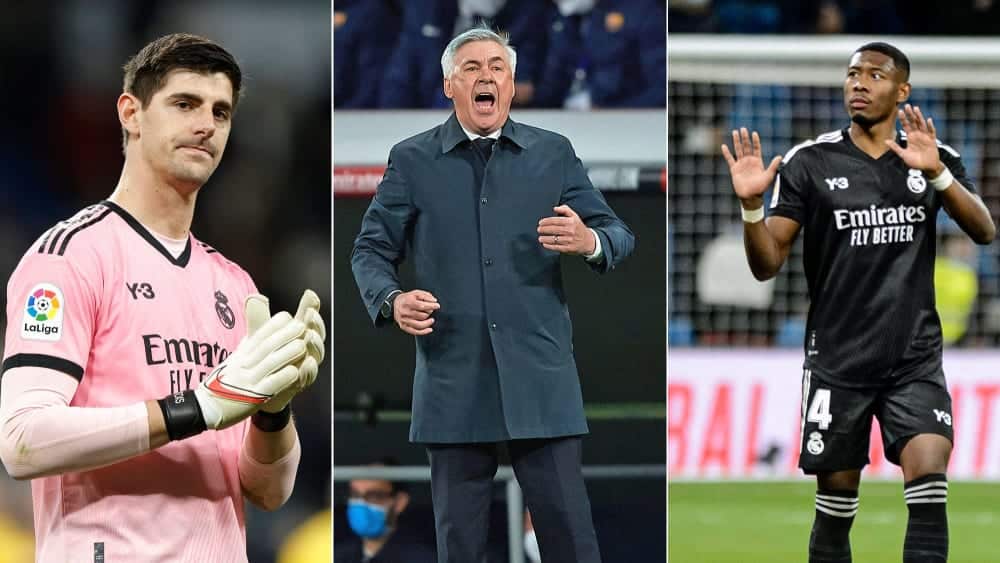 All in black, Real Madrid wanted to celebrate a great Clasico evening. But it turned out to be a black one, a pitch-black one – for which coach Carlo Ancelotti blamed himself.

FC Barcelona celebrated a kind of “resurrection” on Sunday evening with a 4-0 win in Madrid that even thrilled Bayern pro Thomas Müller. It was truly not apparent who would soon be competing in the Europa League and who in the Champions League quarter-finals. And if an outsider had had to make a guess, he would definitely have picked the Catalans as Chelsea FC’s opponents and not Eintracht Frankfurt’s.

That’s why Real went for a ruthless reckoning. At its centre: Carlo Ancelotti. The Italian took the blame for the dismantling in his own stadium and apologised for the performance. If you had to compare Real’s defence to a door, it was already wide open before the break. After the change of ends, it was wide open – and the handle was also fixed to the outside wall.


At the break, a helpless Real, who were largely confined to counter-attacks, were already 2-0 down – and still well served. Ancelotti had to change something, but his experiment with a three-man backline failed miserably. Less than 30 seconds after the restart, Ferran Torres ran 30 metres alone towards the Real goal. One minute later, the outstanding Pierre-Emerick Aubameyang put the ball in front of him with his heel for 3:0. Real’s defenders stumbled through the penalty area more than they defended. It was a similar story four minutes later when it was 4-0 – Ferran Torres returning the favour to Auba with an assist.

Ancelotti: “I won’t make a big drama out of it “

Real were truly fortunate to see Barcelona miss out on a number of high-scoring opportunities and then drop down a few gears. Speaking about his back three, Ancelotti said: “Sometimes you do it right, sometimes you fail. I failed in this game. But I’m not going to make a big drama out of it. “

He didn’t like to do it, but the Spanish press is known for it. “Ancelotti’s hara-kiri”, wrote the “AS”: “The Italian’s bizarre decisions accelerated the disaster. Ancelotti gambles away a lot of credit.” The newspaper’s front page was emblazoned: “Black night”. For the 120th anniversary, Adidas and Real had special jerseys made all in black – which may not sell quite so well now.

The Real-affiliated “Marca” wrote: “The best Barça walks through the Bernabeu against an unrecognisable Madrid. One of the slaps in the face that hurt the most.” Veteran Nacho, who had captained the Royals onto the field, admitted visibly dejected: “The result says it all. It was one of our worst games this season. “

Courtois displeased: “You didn’t see that on the pitch.


Sharp criticism came from keeper Thibaut Courtois, who as Real’s best professional prevented an even higher defeat with great saves: “We presented an unacceptable picture for this club. Barça may have played on Thursday, but you didn’t see that on the pitch.” If there the outsider had to guess again, he would have pretty much bet on a higher charge by Real in the last few days.

Ancelotti, who did not want to accept the unquestionably serious absence of goal-scorer Karim Benzema (“We didn’t lose because of that”) and did not want to discuss an early sending-off for Aubameyang for his shin kick against Toni Kroos (“That’s no excuse”), believes in the positive effect of the upcoming international break. Because of the injured, but also because of a mental reset.

Ancelotti did not want to cast doubt on the will of his players, which was broken with the 0:4 at the latest. “The attitude was very good, the players were very motivated,” said the Real coach, who again made himself the focus of criticism: “The planning was simply not good, as I have already said. “

Alaba also has a bitter evening

A bitter evening was also experienced by David Alaba. The Austrian, in the first leg still celebrated goal scorer and within a few months ascended to the undisputed defensive leader for the royals, did not look really good at the first two conceded goals. After switching to a three-man backline, he played as a left winger after the changeover, and his attacking accents at least livened up Real’s lame offensive play a little.

But after 90 minutes to forget, Alaba had no other choice: as an apologetic gesture, he raised both hands in the direction of the fans.