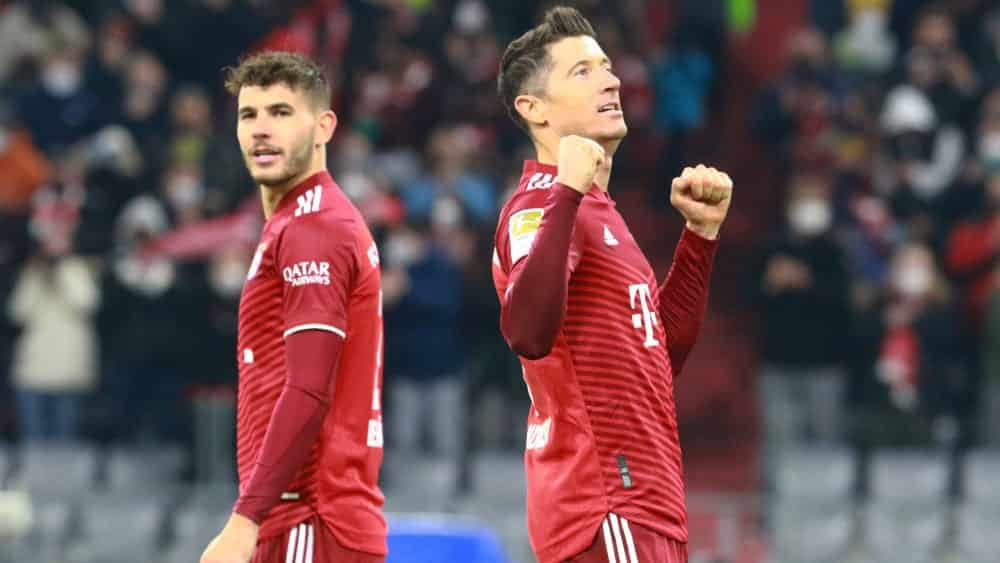 The gap between Robert Lewandowski and his pursuers in the battle for the Golden Shoe is widening again. Wissam Ben Yedder is a new addition to the top 10.

It’s just the beginning of spring – and Robert Lewandowski already has over 60 points in the Golden Shoe ranking! Where is this going to lead? As a reminder: In the previous season, the Bayern hitman won with 41 goals and 82 points. In 2011/12, Lionel Messi outpaced the chasing pack and even cracked the 100-point mark with a staggering 50 goals.

Actually, after this weekend, it looks like this: Lewandowski is on top with 31 goals (62 points) after his brace in the 4-0 win over Union Berlin, while the podium is a little more cosy at the moment because Karim Benzema (22/44, absent due to injury in the 4-0 debacle in the Clasico) and Ciro Immobile (21/42, 0-3 in Lazio’s city duel with Roma), both without goals or wins this time, have been joined by another player, Dusan Vlahovic (21/42). The Juve star scored in the 2-0 win over Salerno.

Ohi Omoijuanfo (27 goals, 40.5 points), who can add nothing to his goals scored for Molde for this ranking, is correspondingly passed through and is now fifth. Behind him lurk Patrik Schick (Bayer 04 Leverkusen, currently injured) and Mohamed Salah (Liverpool FC), who both remain on 20 goals.

In addition to Lewandowski and Schick, the Bundesliga is represented by three other players in the top 20 European goal scorers: 15th place is occupied by Dortmund’s Erling Haaland (still 32 points), who is ready for action again. Cologne’s Anthony Modeste and Christopher Nkunku of RB Leipzig share 17th place with other players (still 30 points).

German professional Deniz Undav, who scored his 25th goal of the season for Belgian leaders Union Saint-Gilloise (1-1 against Oostende) and now has 37.5 points with a factor of 1.5, and Wissam Ben Yedder of AS Monaco added to his tally. The French striker scored a brace in the 3-0 win over PSG.

Ballon d’Or: Messi not nominated for the first time since 2005