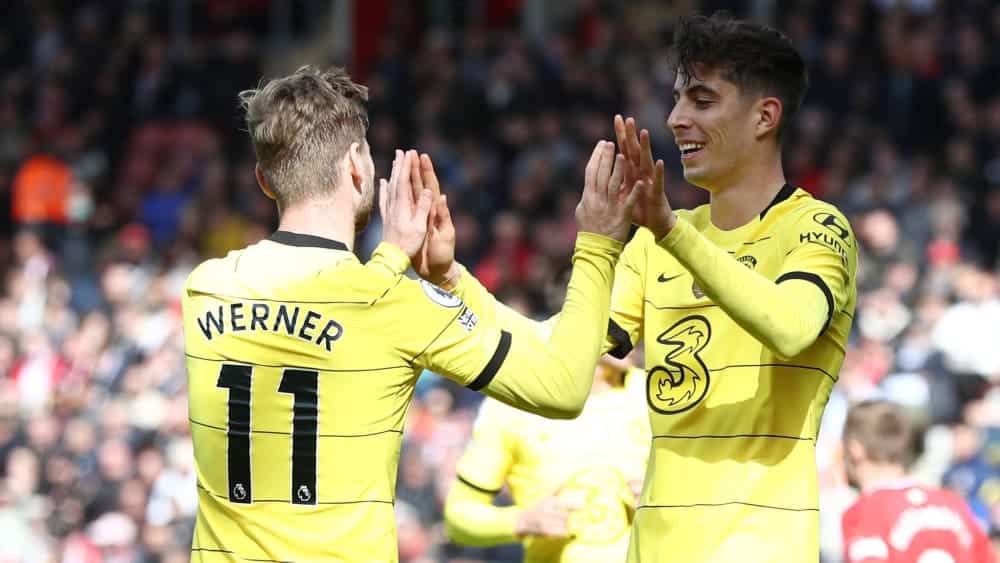 Chelsea FC took their Champions League frustrations out of the equation after losing to Real Madrid by dispatching Southampton FC 6-0. Timo Werner and Mason Mount each scored twice.

From the first minute, the balance of power was clear: Chelsea made the game, Southampton only ran behind. Already in the opening minutes, the defensive construct of the home side fell apart – the first chance for the Blues came from Werner, who hit the post from 15 metres (3rd). The first goal was not long in coming: After a brilliant volley from Mount, Marcus Alonso hammered the ball into the net (8th).

Chelsea unleashed, Saints off the mark

Only a few minutes later the bell rang again: Mount first initiated an attack himself, then converted a blocked cross dryly into the bottom left corner with a long-range shot (16th). Southampton completely fell apart, Chelsea played lively: After a couple of missed chances, Werner picked up a misplaced back-pass from Ward-Prowse, skipped past Forster and slotted home for 3-0 (21).

But that was not enough: After winning the ball in front of the opponent’s sixteen, Werner hit the post again after a fancy solo, but this time Havertz, who was running with him, was in the right place and slid the ball into the empty goal for 4:0 (31.). After that, the Blues went down three gears and Southampton still didn’t come up with anything. Shortly before the break, Chelsea came dangerously in front of the goal several times, but three strong saves by Forster prevented further goals. And so it went into the break with a 4-0 lead.

Werner and Mount with brace

After the restart the Saints seemed to have caught themselves, Chelsea looked rather passive in the first minutes. But then the Blues turned it up a notch: After Kante’s dipping shot, Forster deflected the ball to the left, but Werner, who was running with the ball, was there and slipped the ball into the net for his brace (49th minute). A few minutes later, Mount completed the half-dozen: After Pulisic and Werner failed to score from close range against the strong Forster, it was the Englishman who pushed the ball over the line for 6:0 (54.).

The game then settled into a pattern: Chelsea pushed the ball back and forth and set up their opponents, the home side stood deep and were anxious not to concede any more goals. The visitors’ attacking onslaught was over, Alonso alone narrowly missing a seventh goal in the 74th minute.

The game was heading towards the final whistle, there were no more offensive actions worth mentioning. The Blues consolidated their third place in the table with the 6-0 win and can go into the CL quarter-final second leg against Real Madrid with a lot of self-confidence. For Southampton it is the third home defeat in a row.

Share
Facebook
Twitter
Pinterest
WhatsApp
Previous articleDoncic leads Mavs to a resounding victory – and will miss the last game due to suspension
Next articleBarella dreamlike, Dzeko ice-cold: Inter increase the pressure in the Scudetto race