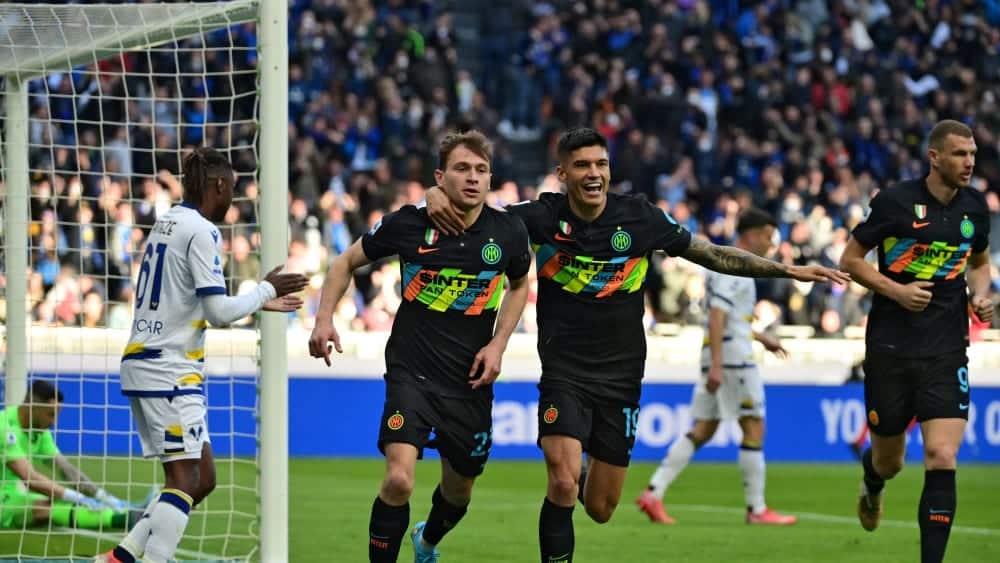 Inter came out on top in the fight for the Scudetto on Saturday. The Nerazzurri defeated Hellas Verona thanks to a convincing performance, especially in the first half.

Nearly a week after their crazy 1-0 derby d’Italia win at record champions Juventus, Inter have re-stated their own claims in the Scudetto race, edging ahead of Napoli and Milan. Inter coach Simone Inzaghi made three changes after the Juve game: In the three-man backline, de Vrij and Dimarco started instead of d’Ambrosio and Bastoni (both on the bench). Correa also replaced Martinez, who was suspended with a yellow card.


Against Hellas, who still have a minimal chance of making it to the international stage, Inter were dominant from the start. It took until the 22nd minute, however, before a moment of change brought the longed-for lead: Perisic – who had forced Hellas keeper Montipo into a great save shortly before (18th) – intercepted the ball in his own half and immediately recognised the situation: The former Bundesliga professional turned on the turbo and marched with the ball into the opponent’s penalty area to then set up Barella, who had also run into position, with a cross. The 25-year-old Italy international skilfully took the ball directly with his right wing and put it under the crossbar for a well-deserved lead (22nd minute).

Correa could have added to the lead shortly afterwards (26th, too unplaced), but it was Dzeko who made it 2-0: After a Dimarco corner, the ball fell at the 36-year-old veteran’s feet and he only had to push it in (30th). Before the break, Verona had their only real chance, but Simeone failed to score against Handanovic.


In the second half, Inter took it a bit easier, but kept control of the game and did not let any tension arise. Due to a number of changes (Inzaghi brought on Gosens, 59th), the flow of the game suffered, which is why D’Ambrosio had the last chance late in the second period: The 33-year-old’s shot was deflected just wide of the post by Montipo for a corner.


In the end, though, it was a comfortable 2-0 win that keeps Inter in second place until Sunday and reduces the gap to Milan to one point.