Premier League in sight: Lacazette turns the game around in the last second 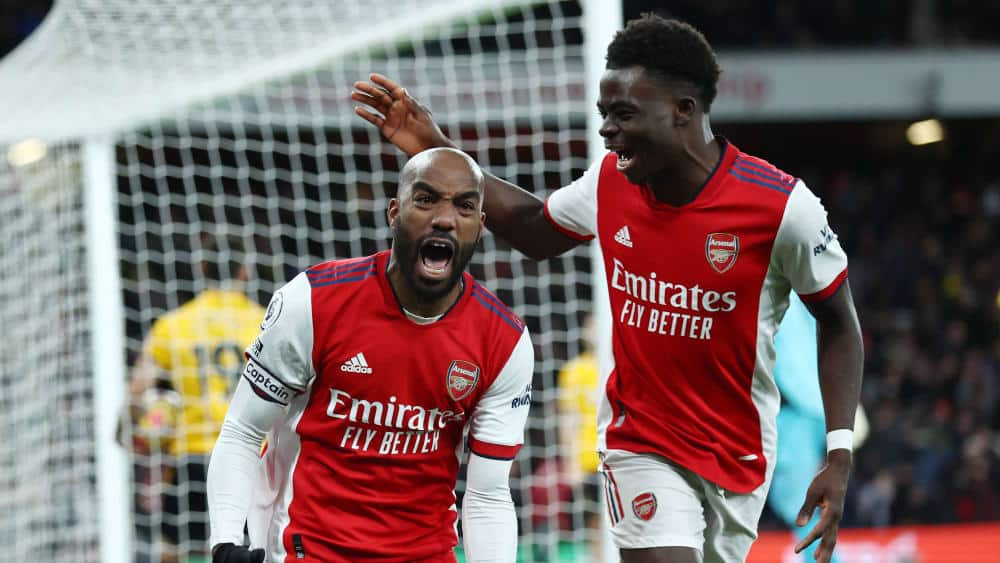 Arsenal FC are in the thick of the race for one of the coveted Champions League places in the Premier League: The Gunners turned around the replay against Wolverhampton with enthusiasm and creativity. The winning goal came in the very last second.

The second meeting in 14 days between the Gunners and Wolves took place at the Emirates Stadium. After Arsenal had already won 1-0 a fortnight ago when shorthanded, the North Londoners were expected to come away victorious against their direct rivals this time as well.

The Gunners were able to win the second game in two days against Wolves at the Emirates Stadium.


The first upset of the match was not long in coming: Gabriel Martinelli was brought down in the sixteen as he tried to finish, but referee Atkinson decided against blowing the whistle (2nd). On the other side, Wolves kept up the tempo and the ball was in the net early on, but goalscorer Saiss was a step offside (6th).

The lively start of the game was then crowned by Hwang, who intercepted Gabriel’s weak back pass, rounded Ramsdale and scored the lead for Wolves (10.). The lead, however, unexpectedly gave the Gunners a boost and they pushed more and more for the equaliser. Lacazette missed the first of many chances (16th) and Saka’s shot was blocked by a foot at the last moment (22nd).

The pressure of the home side increased and Wolves had no answer. Once again, the eye-catching Lacazette won the ball in the opposing penalty area and served Gabriel Martinelli, who put the ball just over the right corner (35th) and just before the break he failed to hit José Sa (44th). In total, the Gunners had ten shots on goal in the first half – still without success.


Just before the break, Raul Jimenez nodded a header and Wolves’ third goal just wide of the left post (45.+1). At the break, a look at the statistics gave Gunners fans little cause for hope: Under Mikel Arteta, Arsenal had collected only four points from draws and a full 15 defeats after falling behind at the break.

The second period opened directly with a double chance: First Gabriel Martinelli missed the equaliser (46th), in the direct counterattack only centimetres separated Hwang from a brace (47th). In the following period, the game was dominated by a few fouls in midfield and the game lost some of its attractiveness. Wolves dropped more and more and received Arsenal deeper in their own half, but convinced with compact work in the group.

Pepé and Lacazette score after all

Arsenal initially despaired more and more of the Wolves defence, but in the end a combination of the jokers brought the equaliser: Nketiah found Pepé, who scored from close range on the turn (82nd). This heralded a thrilling final phase in which Pedro Neto (86th) and Ödegaard (88th) missed more than promising opportunities to make it 2-1.

In the fifth minute of stoppage time, Lacazette finally sent the Emirates into ecstasy and scored the goal to make it 2-1 (90.+5) after a beautiful assist from Pepé. In retrospect, the goal was ruled an own goal by Wolves goalkeeper José Sa, who had deflected the ball into his own goal with his hand while making the save.

The comeback win lifts Arsenal to fifth after a convincing performance and leaves them just one point behind Manchester United, who have played two games more. The Gunners’ next game is away to Watford FC on 6 March