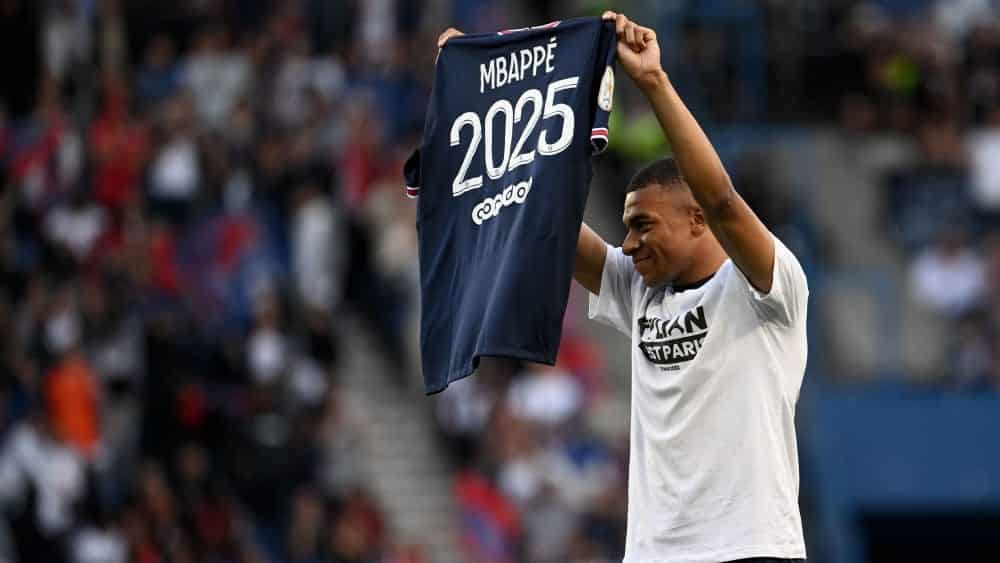 His transfer to Real Madrid seemed to be a done deal, but now things have changed: Kylian Mbappé (23) is staying with Paris St. Germain and has extended his contract with the French champions.


It’s something like the big plot twist to the season finale, towards which there has been plenty of staging, especially on the part of the leading actor. Kylian Mbappé will not – as long suspected – move to Real Madrid on a free transfer, but will remain with Paris St. Germain. What several media had already reported on Saturday is now official: the 23-year-old attacker has extended his expiring contract with the French champions by three years until 2025.

Just before the final game of the season against FC Metz, Mbappé joined PSG president Nasser Al-Khelaifi to announce the decision on the Parc des Princes turf. “I am happy to stay in Paris, to stay in my city,” the attacker said. “I hope I can continue doing what I love most: playing football and winning trophies.” He was celebrated by the fans with chants, then in the match he scored three goals in keeping with his status.

According to media reports, Mbappé had informed Real president Florentino Perez on Saturday that he would not accept the Madrilenians’ offer. In a message to Perez, he had thanked him for giving him the opportunity “to play for the club I’ve been a fan of since I was little”. But he did not accept it.

This is the second year in a row that Real’s hopes of securing the services of the 2018 World Cup winner have been dashed. In the summer of 2021, Real reportedly made an offer of €200 million for Mbappé, which PSG ultimately rejected – knowing that the figurehead would be able to leave the club on a free transfer a year later. Which, until a few weeks ago, was what it looked like. Mbappé’s mother said on Friday that the offers from the two clubs were “almost identical”.


Instead of a move to his childhood dream club, Mbappé will stay at home and continue to play at the Parc des Princes – just 26 kilometres south-west of his birthplace of Bondy. He moved to the French capital from AS Monaco in 2017 and has since scored 168 goals in 216 competitive games, becoming French champion four times and cup winner three times. On Saturday night, he was also crowned Ligue 1’s top scorer for the fourth year in a row.

However, the 2018 World Cup winner still lacks a Champions League title. In the current season, he failed to reach the last 16 with PSG – despite scoring one goal in both the first and second legs. To Real Madrid.