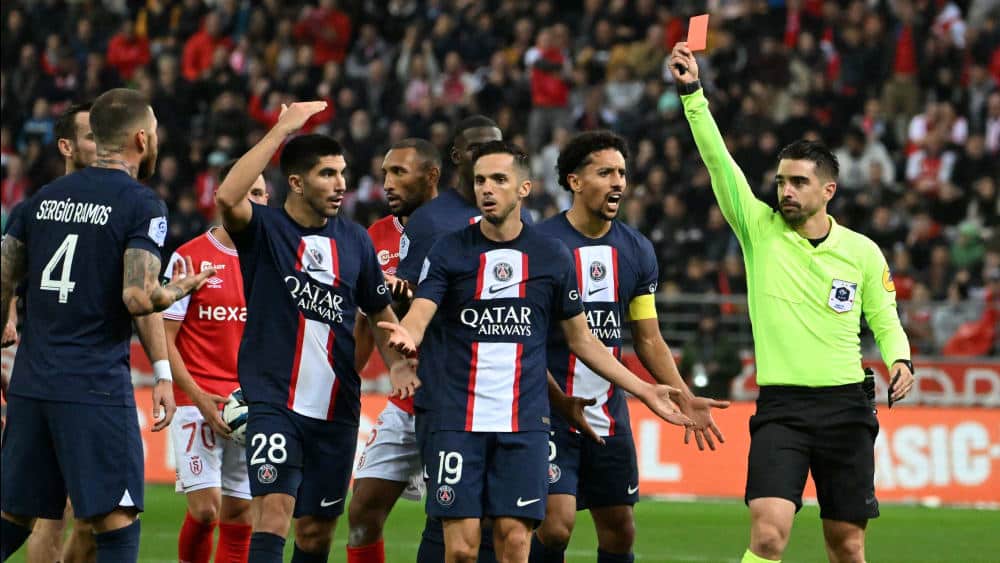 After the disappointing 1-1 draw in Lisbon, Paris Saint-Germain suffered another setback in the league. They could only manage a nil draw against bottom club Reims, and Sergio Ramos was sent off as well.


PSG coach Christophe Galtier gave some of his players a rest after the 1-1 draw against Benfica Lisbon. Hakimi, Vitinha, Nuno Mendes, Neymar and Messi were all conspicuous by their absence from the starting eleven, with Mukiele, Fabian, Juan Bernat, Sarabia and Soler all new.

Mbappé was the lone entertainer up front – and he clearly struggled in this role against a Reims team that stood deep, shifted well, was gripping in the duels and thus kept damage away from their own box.


However, it was basically a game of one goal, that of Stade goalkeeper Diouf, who remained unemployed for a long time and was only really challenged after 33 minutes. He made a great save from Mbappé, who had taken a shot from an acute angle. It was to remain the only chance worth mentioning in the first half. PSG could not be satisfied with their own performance, the favourites were too pomaded, too uninspired and too passive.

Then Sergio Ramos overdid it with his protest against a yellow card and was immediately sent off with red by referee Pierre Gaillouste (41.). It was the Spaniard’s 21st sending-off in La Liga or Ligue 1 – seven more than any other defender from the top five leagues has seen in the 21st century.

Things didn’t really get any better after the break, with the Parisians more concerned with safety as they were outnumbered. Zeneli tested Donnarumma (52nd), while on the other side substitute Neymar just missed on the left (67th).

In the final phase, Reims began to have problems with their strength and PSG regained a little of the upper hand – but the 0-0 draw was still unassailable.


The Parisian millionaire squad thus blew the dress rehearsal for the second leg in the Champions League on Tuesday against Benfica. Next Sunday (20.45 hrs), they will play a treat in the league against their closest rivals Olympique Marseille.