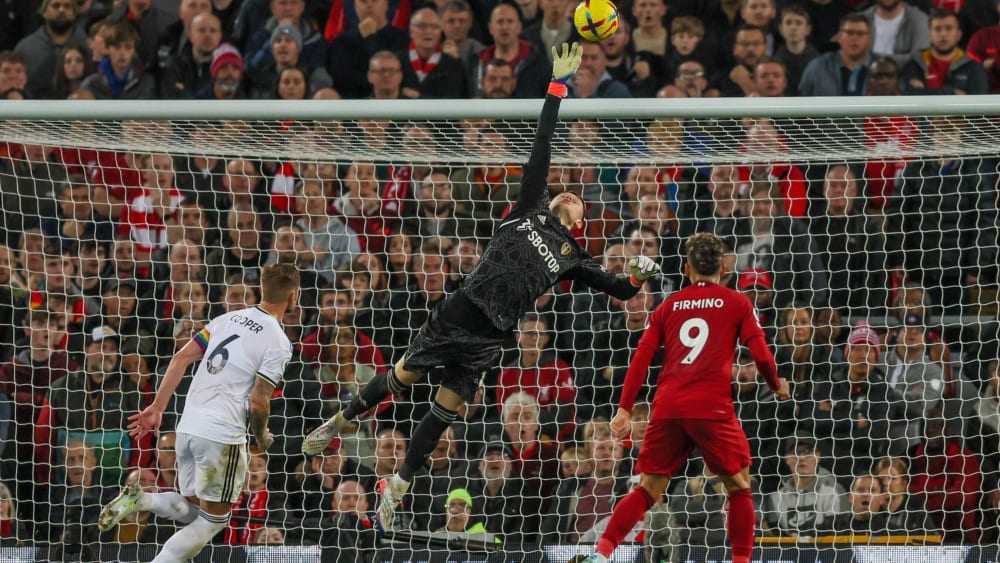 Leeds United pulled off a surprise 2-1 win over Liverpool FC at Anfield, thanks in particular to goalkeeper Meslier.


The Reds had booked their place in the last 16 of the Champions League with a 3-0 win in Amsterdam during the week – and now wanted to round off their successful week with another win against Leeds, who were in poor form. Jürgen Klopp made just one substitution, with Thiago the fine midfielder ahead of Henderson, who was left on the bench.

What happened? Gomez won the ball on the right, then was easily pressured by Aaronson and wanted to pass back to Alisson. But Alisson had already come out, so that Gomez’ pass went completely in the trousers and rather became a template for Rodrigo Moreno – 1:0 (4.).

The Reds had much more possession, but that turned out to be a problem, because Leeds had robbed Klopp’s team of one of their greatest strengths – the enormously high counter-pressing. It was almost non-existent because the Whites were hardly ever on the ball. United also made the pitch tight, defended with a lot of heart and running – and still conceded the equaliser.

A blunder was the decisive factor in this goal as well: Meslier missed Alexander-Arnold’s cross from the right penalty corner – and promptly got his reward: Robertson found Salah, who scored a technically demanding goal from close range to make it 1-1 (14th minute).

Wild phase with lots of chances

After the equaliser, a phase followed in which things got quite wild. Liverpool in particular played sloppily and were lucky Leeds did not take the lead again. United had chances, but Aaronson hit the crossbar (20th) and Harrison failed to beat Alisson (21st).

On the other side, Kristensen made a strong save from Salah (31st), Meslier had the upper hand in a one-on-one with Darwin (32nd) and Robertson’s deflected cross went narrowly wide on the right (45th).

Klopp was not satisfied with his team’s performance in the first half, but the German coach did not make any changes at half-time – only to see his charges become perplexed. There was a lot of trouble in the forward play and the home side were hardly able to create any danger.

That was to change, however, as the Reds upped the tempo after the hour mark and created some top-class chances through Robertson (61st), Darwin (66th) and substitute Henderson (69th), but Leeds keeper Meslier was not to be beaten. Liverpool were the dominant team in the closing stages but ran out of time and Leeds held on for the draw.

The Whites were also able to rely on goalkeeper Meslier to keep out both Darwin (79th) and Roberto Firmino (82nd), while substitute Bamford had missed what could have been the visitors’ best chance when he made an unbelievable error of judgement to shoot clear from 15 yards in a central position.

But there was still to be a happy ending for the underdogs: After Meslier had been on the spot against Salah (86th) and Firmino (88th), substitute Gnonto was only half-heartedly accompanied on the left. He then brought the ball inside, where Bamford dribbled for Sommerville. He didn’t take long to tap the ball into the net for a much-celebrated 2-1 victory (89th minute).

Liverpool FC thus stumbled once again in the league and remain stuck in the grey midfield of the table. On Tuesday, however, the Reds can make amends at home in the Champions League in the summit clash against Napoli – and possibly even claim first place in Group A. However, it will take a minor football miracle for Liverpool to overturn their 4-1 defeat in the first leg to knock the in-form Italians (13 wins in a row) off their throne.


The next highlight in the league is on Sunday (17.30) in London, when they travel to Tottenham Hotspur. Leeds, on the other hand, have a home game against Bournemouth the day before (4pm).