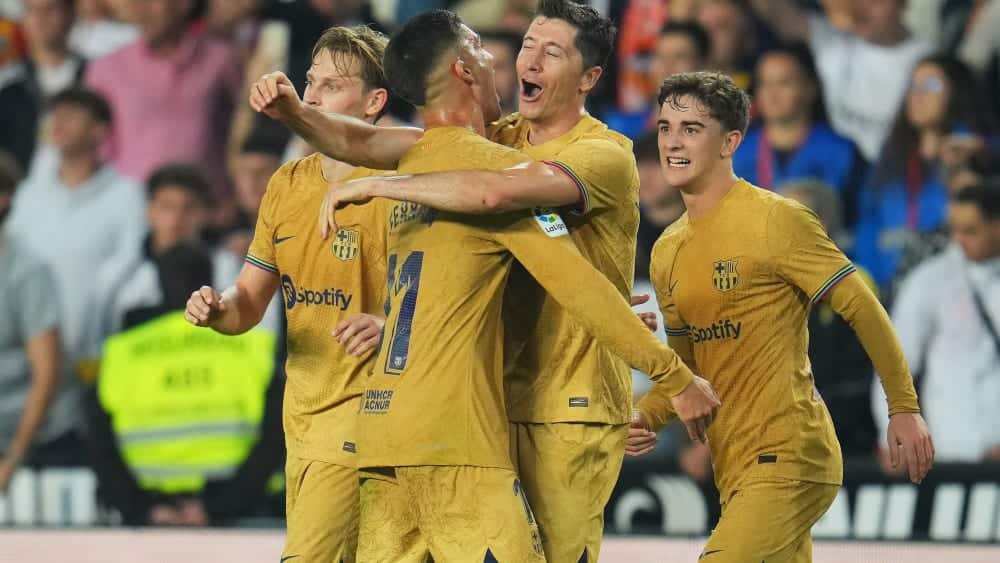 FC Barcelona didn’t really show a reaction to their Champions League elimination – and yet continued their winning streak in La Liga. The late 1-0 away win in Valencia was once again secured by Lewandowski.

Champions League dream? Since Wednesday definitely out of the question! But the La Liga title lives on – thanks to Lewandowski. When the Real fans had already rubbed their hands together on Saturday evening, the Polish goal-scorer struck with ice-cold precision at the Mestalla. In his 17th match for Barcelona, Lewy scored his 18th goal. And the seconds immediately after the final whistle showed how important it was. The Barça professionals cheered and hugged each other – above all Lewandowski, their life insurance.

For a long time, however, it looked as if Barcelona would lose again after two convincing victories in the Spanish top flight. Not with Lewandowski.

But first things first: Ansu Fati was the only newcomer to the starting eleven to provide the Blaugrana with any danger in the first period. But first the Spaniard failed to score against keeper Mamardashvili, then his supposed opening goal was rightly disallowed for offside (13th, 23rd).

Lewandowski, who had hardly made an appearance before, then had a premiere seconds before the break. The former Bundesliga goal-scorer would have scored his first La Liga goal with a header only centimetres away. But the ball hit the post in minute 44. On the counterattack, Valencia centre-back Gabriel Paulista had the first real chance for the hosts, but his header flew past Germany international keeper ter Stegen’s goal on the left (45.+2).

And five minutes after the change of ends, the Mestalla went wild for the first time. After a cross from the right, the ball slipped through to the second post where Samuel Lino pushed the ball over the line. However, after VAR intervention, the goal was justifiably disallowed because Marcos André had touched the ball with his hand a fraction of a second earlier.

Garcia and Koundé replaced with injuries

In a three-man substitution (57th), FCB head coach Xavi’s dissatisfaction made itself felt. But there was no real change in the Catalans’ game as a result of the personnel rochade. Instead, Xavi was tearing his hair out a quarter of an hour before the end of the game because Koundé, the second central defender on the evening, had to leave the pitch injured. After 42 minutes, Marcos Alonso had already replaced the injured Garcia.

Six minutes before the end, Barcelona’s coach had the goal cry on his lips twice, but first Ferran Torres – like Modeste against Bayern – scythed over the ball, then Raphinha fatally stole the ball from the onrushing Lewandowski (84th). In the 3rd minute of stoppage time, when the fans of the visitors from Catalonia had probably already resigned themselves, it was Lewandowski who pulled Barça’s head out of the noose. Lewy” artistically headed Raphinha’s cross into the bottom right-hand corner at the second post.


Well, if Lewandowski should miss a goal … Until the World Cup break, FC Barcelona still have the meaningless CL game against Viktoria Pilsen on Tuesday as well as the important league games against Almeria (H) and Osasuna (A).