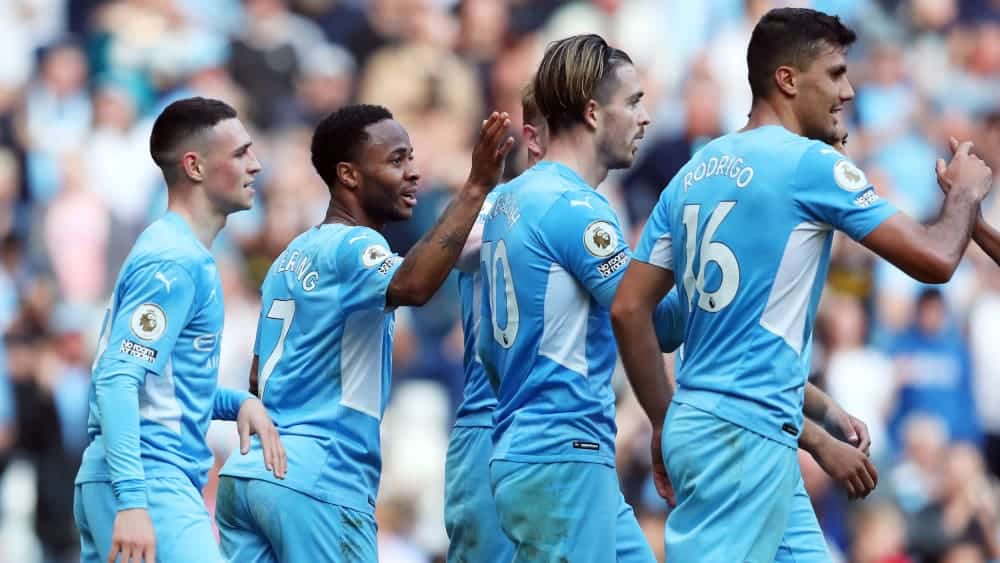 Manchester City made impressive use of Liverpool FC’s slip-up in the Championship race to extend their lead at the top of the table with a 5-0 win over Newcastle – in two respects.

Eddie Howe made three changes to Newcastle’s starting eleven after the 1-0 defeat at Liverpool, with Schär, Shelvey and Willock making way for Lascelles, Longstaff and Wood.

City started in their usual dominant fashion and had the first top chance in the tenth minute, which Laporte missed. Just five minutes later, a defensive colleague, Cancelo, missed the Skyblues’ second great opportunity, but they were successful shortly afterwards: Gündogan fed Cancelo, who crossed to Sterling, who again nodded in from close range (19th). But at this point Newcastle also had their moments and scored the supposed equaliser through Burn, but Bruno Guimaraes was offside.

It was the last sign of life for the visitors, who were lucky in the 34th minute that the last ball of a wonderful combination of the favourites did not find a taker. Laporte made up for it shortly afterwards when he headed home a tap-in for a 2-0 half-time lead (38th minute).


The picture did not change after the break. The Citizens remained the more dangerous team and added to their tally after a good quarter of an hour in the person of Rodri (61st). However, the decision did not cause the home side to shift down a gear. Instead, Zinchenko missed the fourth goal a few minutes later (68th).

In the closing stages, however, City took a step back and the visitors had their best chance of the game: Ederson saves one-on-one against Joker Wilson (83.). Spurred on by Wilson’s chance, the home side then struck again – and twice: First, substitute Foden finished himself (90th), before he set up Sterling’s final goal together with Grealish (90.+3).

The 5:0 victory put the Skyblues three points ahead of Liverpool (only 1-1 against Tottenham on Saturday) at the top of the table and landed a possibly decisive three points in the title fight. And that in two respects: the goal difference is now also four goals better than that of the Reds.

City can take the next step on the road to the championship as early as Wednesday night (9.15pm) at Wolverhampton Wanderers. Newcastle are not challenged again until 16 May. Arsenal are the guests at St. James’ Park at 9 p.m.