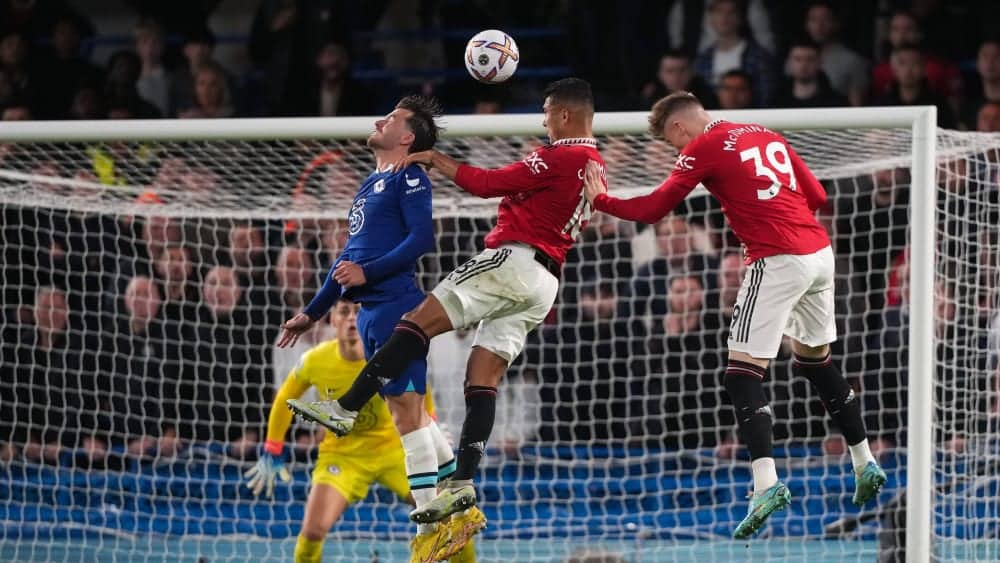 What a dramatic final minutes: The chasing duel between Chelsea and Manchester United was uneventful for long stretches, but the end made up for a lot. The Red Devils have to worry about another central defender.

During the week, despite the strong performance in the 2-0 win over Spurs, there was only one topic of discussion for the Red Devils: the suspension of Cristiano Ronaldo, who missed the top match against Chelsea FC.

Coach Erik ten Hag, however, wanted to concentrate solely on the sporting side of the game at Stamford Bridge and only replaced Fred with Eriksen.

The game between the chasing teams began in an extremely disjointed manner, with both teams failing to produce many offensive actions, precision and sharpness in their passing completely lacking. The Blues, whose coach Graham Potter dropped Havertz after the disappointing goalless draw against Brentford, were the first team to find themselves in the attack. Sterling and Aubameyang, new to the team, were barely visible in the 3-4-2-1 system.

Instead, ManUnited got a little better and had their first chances before the break through Rashford (28th) and Anthony (45.+1). Potter reacted before the break, bringing on Kovacic for Cucurella (36.) and switching to a four-man defence, which helped the Blues to get into the game better.

Section two then had even fewer highlights to offer as Chelsea got a better grip on the defence, meaning virtually nothing happened in either penalty area. Then the Red Devils suffered a bitter setback: After a long lunge Varane got stuck in the turf and was replaced in tears by the Frenchman, who is probably very worried about his World Cup participation (60.).

Visibly shocked, the visitors did even less, so that suddenly the Blues were a bit better – but it took until the 73rd minute for the first chance of the whole match. Chalobah headed a Mount corner against the top of the crossbar and created at least a hint of danger.

Drama in the closing stages

A penalty had to be taken, otherwise no goal could have been scored – and so it came to pass: McTominay, who had been substituted shortly before, clipped Joker Broja far too hard at a corner, and referee Stuart Attwell had to point to the spot. Jorginho took care of the matter and scored the seemingly decisive goal (87th).

But only seemingly! ManUnited had one more chance and actually made use of it: Casemiro sent a header on goal, Kepa was still on it with one hand and extended the ball to the post. From there the ball bounced onto the line and into the Spaniard’s arms, but the referee’s whistle signalled that it had already been behind the line (90.+4).

Thus the Red Devils secured the draw in the last second and are unbeaten in six games. The Blues are also unbeaten under Potter to date.