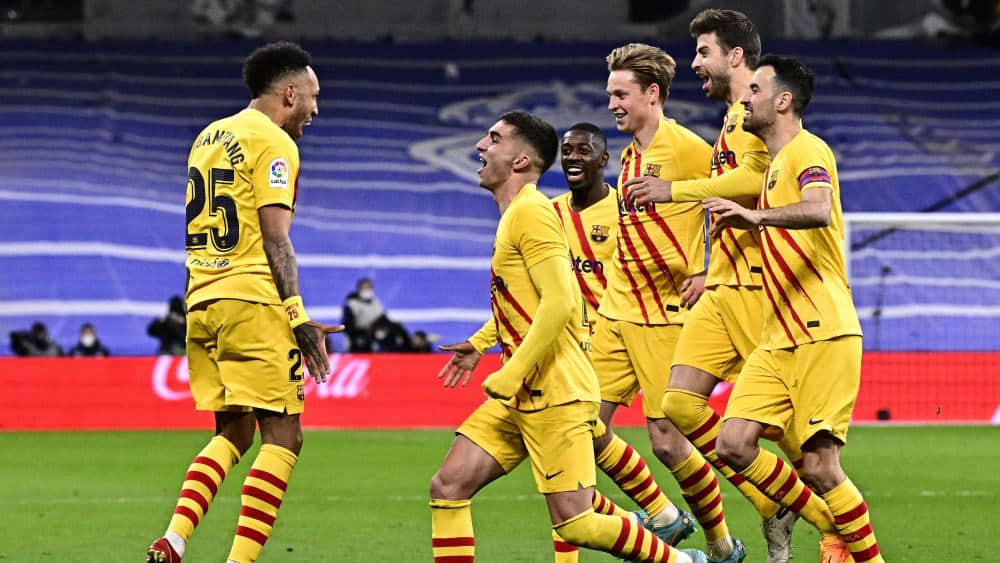 After losing five Clasicos in a row, FC Barcelona took impressive revenge: The Catalans gave Real Madrid a nasty demonstration at the Bernabeu. Above all, Aubameyang was hardly to be caught.


The short story of the first half: two crosses, two headers, two assists from Dembelé, two positional errors from Alaba. The twelve words do not do justice to Barcelona’s performance in particular, however, as the Catalans put in a remarkably dominant performance on the pitch at the Bernabeu. The first chance to take the lead, however, came from the Royalists, who were lurking on the counterattack, but Fede Valverde failed to beat ter Stegen (7th).

In the following period, Barcelona were even more stable defensively and played their possession football to wear Real down. The visitors should have led as early as minute 12, but Aubameyang carelessly missed a top-class chance. Shortly afterwards, Ferran Torres’ shot whizzed past the right corner (18th). Barça pressed and were soon rewarded: Dembelé was unstoppable on the dribble, Alaba misjudged his cross and Aubameyang headed home the 1:0 (29th).


Real were forced to stick to their counter-attacking approach – and were almost rewarded, but Vinicius Junior got the ball past ter Stegen, but not over the line (36.). One minute earlier, Aubameyang could have, if not should have, increased the lead with a left-footed shot. The 2:0 score at the break was finally ensured by a corner kick, which Dembelé brought butter-softly into the middle, where Alaba misjudged – Araujo was in the air behind it and nodded in (38th). It could have been even worse, but Jordi Alba’s cross to the free Aubameyang was too high (44th).

A tactical trick by Real coach Carlo Ancelotti only made things worse with the change of ends, the Italian relying on a three-man defence. This was exposed for the first time less than 30 seconds after the restart, but Ferran Torres failed to find his nerve alone in front of goal.

Just a minute later, however, Aubameyang served the Spaniard the ball – with a heel! – and this time he made the most of the opportunity to make it 3:0 (47th). Only four minutes later, Ferran Torres returned the favour and Aubameyang lifted the ball over Courtois (51). The Gabonese made history: no player in the 21st century had previously been directly involved in three goals in his first Clasico.

The fans waited in vain for a comeback of Real, instead Aubameyang missed the 5:0 twice within four minutes (58., 62.). Ferran Torres and Dembelé were similarly inconsistent (64th, 73rd). Alaba, after the change of sides on the left wing, was almost still the most conspicuous “offensive player” for Real (77., 79.).

In the end Barcelona were really merciful that it was only 4:0. But the Catalans’ statement will resonate throughout Europe. It is unlikely that there will be any new excitement in the championship race – with one game less, Barça can move to within nine points. Sevilla, Real’s first rival, lost 0-0 to Real Sociedad on Sunday – their third draw in a row.