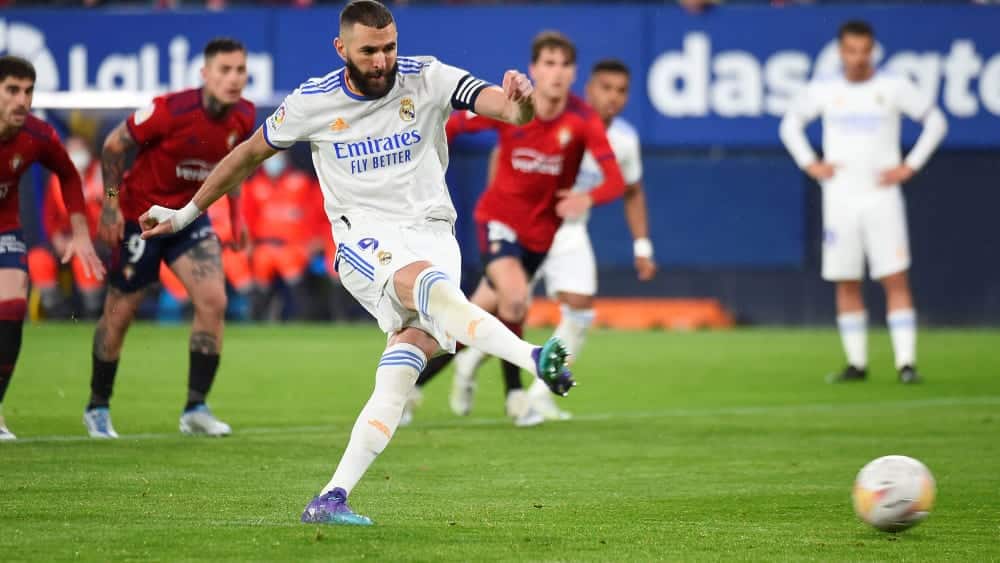 The championship seems more than ever impossible for Real Madrid after a 3-1 win at CA Osasuna. In an interesting duel, Karim Benzema missed two penalties for the Blancos.

17 points clear of city rivals and title holders Atletico, 18 points clear of arch rivals FC Barcelona, who still have two games in hand – Real Madrid are close to another championship after their 3-1 away win at CA Osasuna.

The Champions League semi-finalists won after an entertaining game in which home goalscorer Budimir (13th) quickly levelled an Alaba goal (12th) after Benzema’s assist. The opening quarter of an hour was not yet over when the score was already 1-1 in the atmospheric “El Sadar”. For the Croatian Budimir, who once also played for FC St. Pauli, it was the fifth game in a row with a goal. Alaba cheered for the second time in a Royal jersey.

Osasuna fought passionately, Real dictated the action and played the better football. However, this only paid off seconds before the break, when Marco Asensio was able to tap in for the 2-1 lead (45th). A little later Alaba got injured and did not come out of the catacombs after the break.

It remained exciting because in goal for the hosts was Sergio Herrera. The 28-year-old made a fine save from a handball in the 52nd minute and a penalty kick in the 59th minute – Benzema missed both times and inadvertently added to the atmosphere and the tension.


Till deep into stoppage time, when the Frenchman finely initiated Ancelotti’s decisive counter-attack. Lucas Vazquez was finally allowed to finish (90.+6). Toni Kroos, who was substituted in the 71st minute, was also on the pitch at this point.

After the away win in the city of bullfighting, the royals now only need four points from the last five games to make the 35th championship in the club’s history perfect.