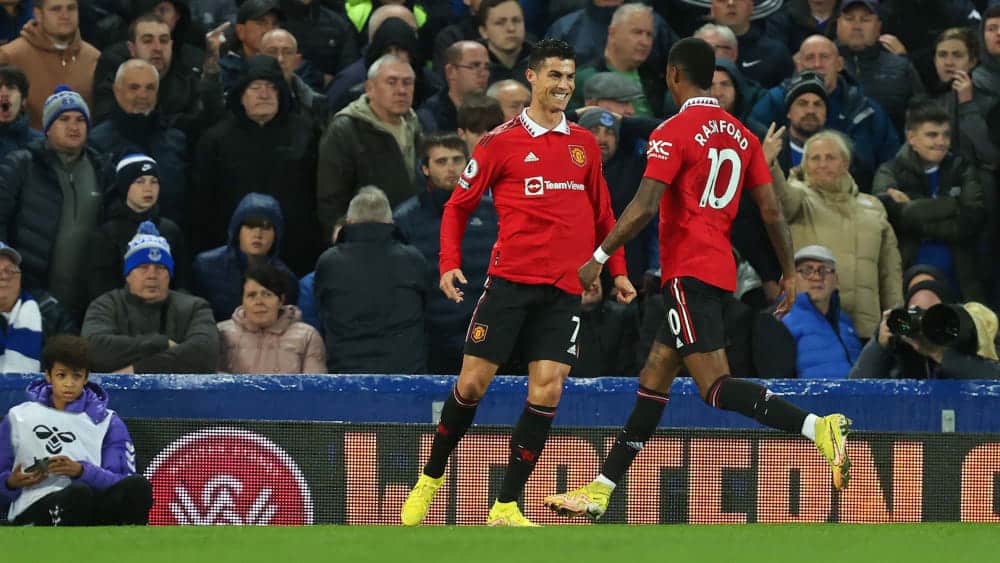 After just under half an hour, Cristiano Ronaldo laced up his shoes for the clash with Everton. His working day began earlier than expected – and was already a successful one just a short time later. Once again, United coach Erik ten Hag had only put the Portuguese on the bench as a reserve player at the start. Then, in the 29th minute, CR7 was substituted for the apparently injured Martial.


By this time, two goals had already been scored: United fell behind early on (5th) after a fine flick from Iwobi. A week after the 3-6 thrashing in the Manchester derby and three days after the unconvincing 3-2 win at Omonia Nicosia in the Europa League, the next setback for the Red Devils was looming – but this time a reaction was not lacking. Ten Hag’s side took control of the game and, after an early loss of the ball by Gueye and a stringent counter-attack, equalised through Antony, who became the first player in United history to score in each of his first three Premier League games (12th minute).

United remained in control of the game but were too sloppy in the front third. Casemiro had a great chance again, but the newcomer missed with a completely free header (42.). Casemiro made up for his mistake shortly afterwards. He won the ball in midfield and immediately followed up with a dream pass to set up Cristiano Ronaldo, who was on the move on the left and beat Pickford with a low shot (44th) – it was the 700th competitive goal of his career in club football. A letter of application for the starting eleven in the next games?

The now 37-year-old CR7 missed a further opportunity after the break when his header flew past the goal after Casemiro’s initial effort (58th). His team was no longer as dominant as it had been in the first half, but at least they almost didn’t concede a goal either.

The fact that Rashford’s goal was conceded by VAR for what was presumed to be the deciding goal (81st) was something Ten Hag’s team could finally get over as de Gea made a great save from Garner in the closing minutes and Calvert-Lewin headed narrowly wide from the ensuing corner (90.+2).

The Red Devils moved up to fifth in the league with the win. Meanwhile, ManUnited continue their Europa League campaign with a second leg against Omonia Nicosia on Thursday (9pm). In the league, the club then hosts Newcastle United on 16 October (3pm). Everton FC face Tottenham away on the next Premier League matchday (15 October, 6.30pm).