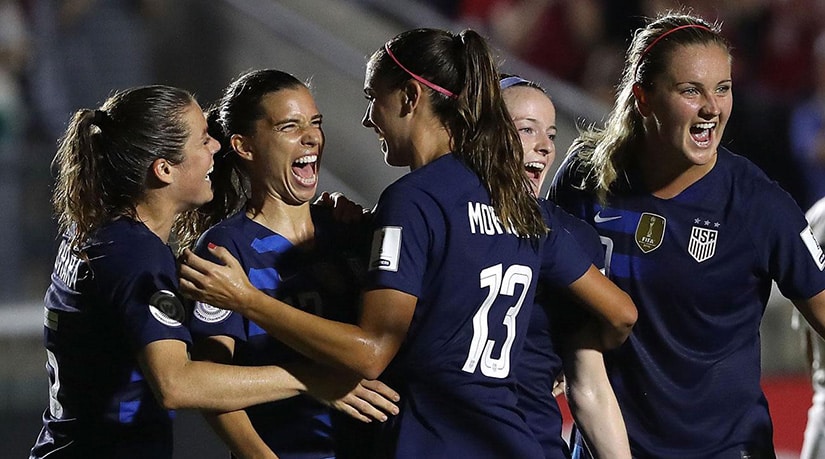 The United States women’s national team needed some time to kick it into high gear, but once they did, Mexico were torn apart.

On Thursday night, World Cup qualifying started in the CONCACAF zone with a matchup between reigning world champions USA and Mexico. An early goal by Megan Rapinoe made it 1-0 and the result remained unchanged going into the break. Then, in the second period, USNWT raised their level significantly.

Two minutes into the half, Julie Ertz scored from a rebound to make it 2-0. Ten minutes later, star striker Alex Morgan headed home a Rapinoe corner kick for her 91st international goal. Tobin Heath made it 4-0 with a header of her own before Megan Rapinoe scored her second of the contest in the 70th minute. Morgan equalled her partner’s accomplishment, finding the net for a second time from close range to round out an easy 6-0 victory.

The win put the U.S. atop Group A’s standings, a group which includes Panama and Trinidad & Tobago. The two faced off last night as well, with the Panamanians winning 3-0. They are USNWT’s next opponent in the eight-team tournament. The top two teams from each group qualify for the playoffs, where semi-finals, a final and a third-place match determine the eventual winner and the three teams which will play in the 2019 Women’s World Cup in France.

USA were untouchable during the previous qualification cycle, winning all of their games without conceding. Their final goal difference after five matches was 21:0. They went on to win the 2015 World Cup held in Canada by defeating Japan 5-2, revenging an unexpected loss at the same stage four years earlier. They are the main favourites heading into the 2019 World Cup as well, so anything but wins in their remaining qualifying matches will be beyond surprising.