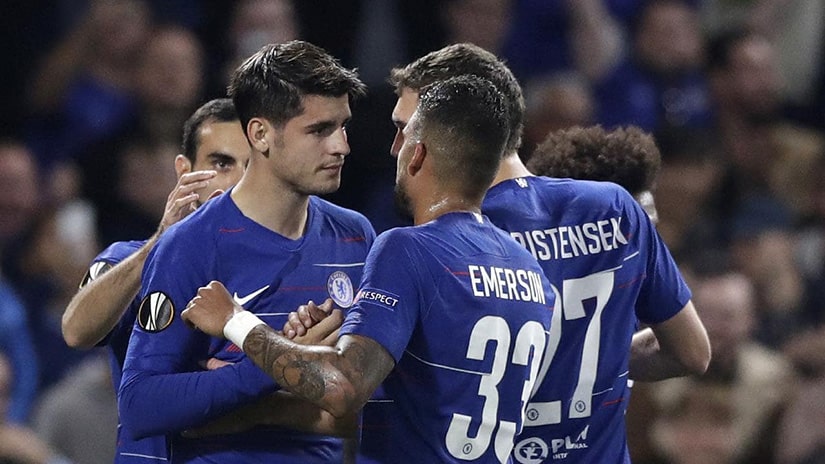 The UEFA Europa League clash with Hungarian side MOL Vidi was much like a cup game for Chelsea. Many of the regular starters were rested, while players with limited exposure and those returning from injuries were given chances to impress.

The growing frustrations over Alvaro Morata’s endless misses were taken up a notch when he failed to convert an absolute sitter in the first half. Some relief came in the 70th minute, when he scored what turned out to be the game-winner with a neat finish following Willian’s flick pass. Nevertheless, the Spanish striker left a lot to be desired.

Fabregas made his long-awaited return from injury and replaced Jorginho in the starting lineup, just like everyone predicted he will. He looked comfortable on the ball throughout the night, although he did lack some pace. We’ll find out whether that was because of his lengthy absence or his age as the season progresses.

Ruben Loftus-Cheek made his season debut as well and got better as the game wore on. He even made a brilliant run inside the opposition box which should have netted him a penalty. However, he and Mateo Kovacic did not mash well. They were in each other’s paths all night long and represent two nearly identical players who lose their value when played together. Kovacic was the worse one of the pair, but Loftus-Cheek was the one who got substituted in the 66th minute by Ross Barkley.

If anything, Gary Cahill showed why he’s not in Maurizio Sarri’s starting lineup in the Premier League. There’s no doubt he has value as a stable, strong and experienced defender, but his lack of quickness gets exposed far too often, even against a team like MOL Vidi. Playing alongside Andreas Christensen, who likes to roam out of position, didn’t help either.

Those movements out of position were why the Dane didn’t have a good game. Both Loic Nego and Istvan Kovacs had chances directly stemming from Christensen’s mistakes.

Davide Zappacosta and Emerson Palmieri were solid at the side back positions, constantly making deep runs and challenging MOL Vidi’s defensive organization. While Zappacosta relied mostly on attempting crosses, Emerson focused on penetration and even missed a great opportunity to score. Kepa Arrizabalaga wasn’t too busy, but he did have to make a couple of crucial saves to prevent the visitors from finding the net.

Much like Kovacic and Loftus-Cheek, Pedro and Willian have similar profiles, thus take away each other’s space. They shouldn’t be on the pitch together, a fact proven once again last night. Hazard, Barkley and Victor Moses all came from the bench, but did not have much influence. Overall, Chelsea demonstrated a shortage of offensive production and an over-reliance on the extraordinary Eden Hazard.