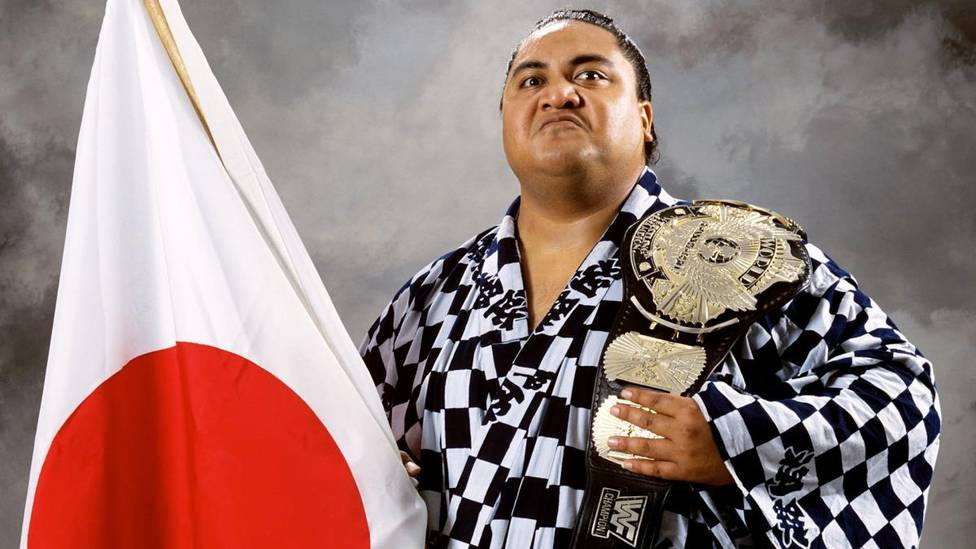 Wrestling colossus Yokozuna was a legendary rival of Hulk Hogan, Undertaker and co. Before his untimely death, his body was completely out of control.

To be true, the story is actually way too crazy. But by all accounts it is – and it tells a lot about how well this WWE legend is remembered.

More than twenty years after their career peak in the mid-nineties, when the wrestling league held one of its first shows in Saudi Arabia in 2017, the Kingdom reportedly approached WWE with a remarkable demand.

Yokozuna should take part in the “Greatest Royal Rumble”, wished a high-ranking “Saudi prince” (presumably the gloomily surrounded ruler Mohammed bin Salman himself) – who had not realised that the former champion had died tragically early 17 years earlier.

In order to somehow come close to fulfilling the wish, WWE hired real-life sumo wrestler Hiroki Sumi for a brief appearance – who was never seen in the wrestling ring again afterwards.

The original – who died tragically young 22 years ago today – had left a far greater mark on the former WWF. Although the league at the time had also done a lot of things wrong with his production.

Yokozuna was rival to Hulk Hogan, Bret Hart, The Undertaker

WWE fans of the nineties – the Saudi Crown Prince, born in 1985, was apparently one of them – remember Yokozuna fondly as an arch-villain who drove all the crowd favourites of the time to despair with his gigantic body mass.

Hulk Hogan, the “Macho Man” Randy Savage, Bret “The Hitman” Hart, Lex Luger, the Undertaker: for all of them “The Mighty” was an effective opponent.

The supposed sumo champion with the manager Mr. Fuji, who waved the Japanese flag for him and brought the salt ritually scattered in sumo (and liked to throw it in the opponents’ eyes): He was the villain on whom childhood heroes had labored.

In fact, Rodney Agatupu Anoaʻi, as Yokozuna was actually called, was neither Japanese nor a sumo wrestler. He was born in San Francisco on 2 October 1966 and came from the famous Samoan wrestling clan represented today by the “Bloodline” with Roman Reigns, Solo Sikoa and Jimmy and Jey Uso – and which is also linked to superstar Dwayne “The Rock” Johnson via a blood brotherhood.

Rodney Anoaʻi was a nephew of the “Wild Samoans” Afa and Sika (Reigns’ father and great uncle of the Usos), his calling was always show fighting.

As “Great Kokina” and “Kokina Maximus” he was active in various international leagues in the eighties and early nineties, among others the Austrian legend “Big” Otto Wanz hired him in 1988 for a fight of the colossi at his CWA in Bremen.

At first only briefly WWE Champion

In 1992, WWF boss Vince McMahon recognised the potential in the then 25-year-old Anoa’i to be a top villain: he combined an imposing appearance with solid ring craft, at his best also paired with amazing agility.

Yokozuna was built up by winning the Royal Rumble in 1993 and also by winning the very first match on the TV show Monday Night RAW (against the helpless Koko B. Ware).

At WrestleMania IX iam 4 April 1993 m Caesar’s Palace in Las Vegas, he then took centre stage for the first time: Yokozuna unfairly dethroned main eventer Bret “The Hitman” Hart with a salt throw by Fuji, who then in his cockiness also challenged the freshly returned from an art break Hulk Hogan to an impromptu match. The megastar then rolled over Yokozuna within seconds.

The staging was supposed to lead to a big Hogan-Hart match (which, much to the Hitman’s chagrin, was never to happen), but when Hogan instead left the league soon after, he relinquished the title to Yokozuna.At King of the Ring 1993, a mysterious photographer (then-WWF manager Harvey Wippleman) hurled a fireball into Hogan’s face with a rigged camera, giving him the win.

It was the start of a 280-day title reign that was effectively staged as a reign of terror – even more so when Yokozuna was joined by the more rhetorically adroit mouthpiece Jim Cornette alongside Fuji. At the centre were feuds against the Taker and Lex Luger, whom WWE tried to build up as the new Hogan with a new image as an uber-patriot “Made in the USA”.

Most unforgettable is their duel at SummerSlam 1993 the preceding “Bodyslam Challenge” on the aircraft carrier USS Intrepid, in which various WWE and other sports stars struggled in vain to unhinge Yokozuna – before Luger landed with a helicopter, got him off his feet and saved the day.

Because the programme didn’t quite have the success they had hoped for, however, in the end at WrestleMania X the title didn’t go to Luger, but back to Hart after all.

Weight was probably over 300 kilograms in the end

After losing the title, Yokozuna’s big time with WWE was over, although the league continued to look for ways to use his presence profitably for a while: He continued his rivalry with The Undertaker, was Tag Team Champion alongside the later tragically injured Owen Hart, faced other colossi in various giants’ duels: Earthquake (the late John Tenta, who died of cancer in 2006 and was once a true sumo wrestler), Mabel (the later Viscera / Big Daddy V, also deceased at an early age) and Vader.

In 1996, WWE released Yokozuna after the giant’s weight got out of control in real terms. How much he really weighed in the end is unclear, but by the end of his engagement he was so obese that he was estimated to weigh over 300 kilograms.

The league sent him on several weight-loss programmes, which only had a limited effect. They also stopped using him because various US states set weight limits for wrestlers that he would no longer have been able to meet. By an Athletic Commission test in New York, he had fallen.

Cause of death pulmonary oedema

Yokozuna slimmed down a bit after leaving WWE and then stepped into the ring for other leagues, but the health problems remained and ended tragically.

While on tour for a British promoter on 23 October 2000, Yokozuna was found lifeless in a Liverpool hotel room, aged just 34. The cause of death was initially given as a heart attack, but it later turned out instead that he had suffered pulmonary oedema, a fatal build-up of fluid in the respiratory organs. The night before his demise, he was said to have drunk a lot.

Yokozuna’s death particularly shook fellow wrestlers, among whom he enjoyed the highest respect, as did almost all members of his family.

In 2012, Yokozuna was posthumously inducted into the WWE Hall of Fame by cousin Solofa (headshrinker Fatu/Rikishi) and his sons Jimmy and Jey Uso.