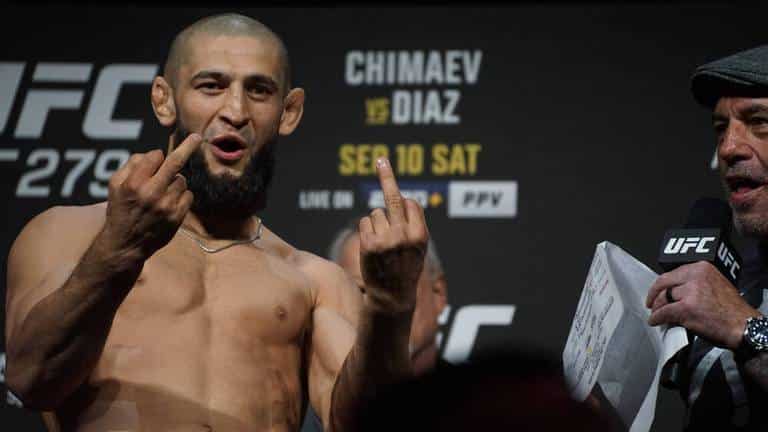 He’s on his way to becoming the UFC’s next big star – and he’s currently making one scandal after another: Will Khamzat Chimaev be the next Conor McGregor?


It was one of the most chaotic weekends in the history of the billion-dollar company UFC – and of all things, its aspiring superstar in the making played the inglorious leading role.

Promising phenom Khamzat Chimaev bowled himself out of Friday’s UFC 279 Pay Per Views main event, helped instigate two backstage brawls, caused a complete card makeover – and raised plenty of questions about what’s wrong with him with his behaviour.

The 28-year-old Swede with Chechen roots (and murky ties to strongman Ramzan Kadyrov) was supposed to fight Conor McGregor’s old rival Nate Diaz in the main event on Saturday in Las Vegas. The undefeated and gifted fighter Chimaev went into the fight as a heavy favourite, a victory over the popular but athletically no longer at his zenith Diaz should further his build-up to stardom.

Instead, total chaos broke out around the press conference on Thursday: Chimaev started a mass brawl between the two camps by kicking old rival Kevin Holland – with whom he had previously engaged in a social media feud. And no sooner had things calmed down and Holland appeared before the media than a second brawl broke out between the entourages of Chimaev and Diaz. UFC boss Dana White then stopped the PK because of the confusing situation and sent the reporters away.

It was pure chaos, which despite everything still had no consequences for the fight night – but Chimaev brought them about in a different way: At the weigh-in on Friday it was revealed that Chimaev had missed the weight limit for his fight with Diaz, which was planned as a welterweight fight – by an incredible 3.5 kilos.

“I kill everybody”: Chimaev makes himself the bogeyman

Chimaev acknowledged the result with a grin and a shrug, later joking about it on Twitter as well, he had clearly brazened it out for the momentous scandal that forced the UFC to completely overturn the event.

Because Diaz refused to get involved in the “mismatch”, the league rearranged the card at short notice, Tony Ferguson replaced Chimaev in the main fight against Diaz, Chimaev got as a replacement opponent – which was a good thing – beating opponent Holland. Amid boos, Chimaev forced Holland to submit with a choke in the first round, amused by the hostile environment he had created himself.

“What do you say now?” he provoked the audience, “I’m the most dangerous man here. I kill everybody.” Chimaev also enjoyed the irritating atmosphere in the press conference: “Do you care? I don’t. I care about my family, my career, my money. “

What’s driving Chimaev? One theory is that his early success has gone to his head and he can no longer control himself – another is that he is deliberately setting himself up as an enfant terrible in order to increase his market value, just like superstar Conor McGregor did. Possibly both are right, even with McGregor the boundaries were and are always fluid.

Like McGregor, Chimaev will know that big stars and those who can become big stars can get away with a lot in the UFC. White’s public words after the Pay Per View also speak to the fact that Chimaev has not overplayed his hand. White talked down the trouble surrounding “Weight Miss” (“What do you want me to tell him? That he should say sorry? It is what it is”), preferring to hail Chimaev’s attraction value, which he celebrated as a “f***king freak of nature”.

So, despite everything, Chimaev can be expected to go for a title soon, at welterweight he would be the logical challenger for the rematch between champion Leon Edwards and Kamaru Usman, who was sensationally knocked out by the latter.

Meanwhile, it is safe to say that the expected fight will be accompanied by sidetracks.