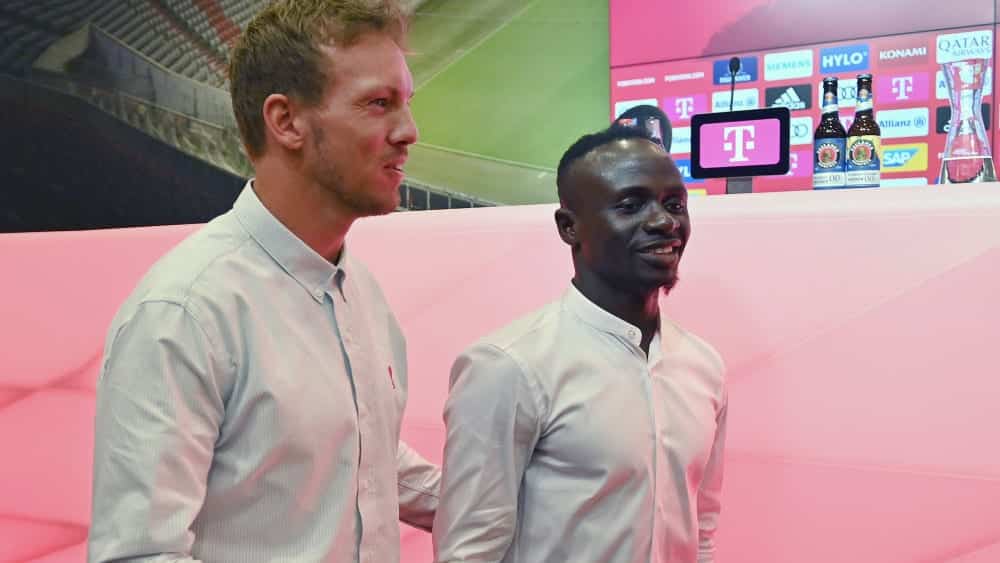 Sadio Mané (30) arrived in Munich and left straight away. Why he switched to Bayern – and how talks came about in the first place.

He had only just sat down when Sadio Mané stood up again. On Wednesday afternoon, shortly after 4 p.m., the Senegalese – accompanied by the loud clicking of the cameras and FCB superiors Herbert Hainer, Oliver Kahn and Hasan Salihamidzic – had appeared in the FC Bayern press room at the Allianz Arena. And when he saw who had sat down in front of him in the second row, he beamed even more than he did for the rest of the 55 minutes. Julian Nagelsmann waved briefly and laughed back eagerly.

A reaction to comforts – meaning Sané and Gnabry in particular

Fc Bayern has got what it christens its “world star”. Mané, after six years at Liverpool, is now expected to mix up the Munich attack, literally. Kahn, the chairman of the board, made no secret of the fact that too many comforts had crept in over the last few months. He was referring in particular to Leroy Sané and Serge Gnabry, whose performances in 2022 were particularly lacklustre.

So someone who has won everything and wants to win even more comes just in time. “The Bundesliga,” Mané thinks, “is a challenge, my whole life is a challenge. I love challenges!” It will also be a challenge to brush up on the German he once learned in Salzburg. It would take him three months, Mané grinned. On Wednesday, it was enough for a self-confident “Servus”

The African Cup champion was able to prepare a little for this day in Fröttmaning. When Hasan Salihamidzic heard the other day via Gnabry advisor Björn Bezemer, who also represents Mané, that there was a possibility of bringing Liverpool FC’s number 10 to Germany, the sporting director grabbed coach Julian Nagelsmann as well as technical director Marco Neppe and immediately stood on Mané’s doorstep in Liverpool.

No one-on-one with Salihamidzic – Fascinated by Nagelsmann’s ideas

Each of the Munich officials explained what they had to explain in turn at that meeting, the last of the bunch being Neppe with a PowerPoint presentation. Mané disappeared shortly afterwards with Bezemer. When Bezemer reappeared, Salihamidzic actually wanted to have a one-on-one meeting to discuss the financial aspects of a transfer. But he did not get that far. Bezemer told Salihamidzic that everything was clear for Mané: he absolutely wanted to join FC Bayern. The player was particularly fascinated by Nagelsmann’s ideas.

So Mané spoke of “six wonderful years” on Wednesday when he recapitulated the transfer and his time with Jürgen Klopp. He preferred not to pick up any advice about Germany and the Bundesliga from his now former coach, joking: “Kloppo was sad and wanted to keep me, but he understood my position.”

No one is sad in Munich, on the contrary. The beaming actually only left those responsible at Bayern when the name Robert Lewandowski was heard in between. Otherwise, Kahn, Salihamidzic and Hainer did not even try to hide their joy about the most dazzling newcomer in recent years. “He wants to know it, he wants to win titles,” Kahn said of Mané. “That’s why he’s landed at the right club here. “

The bar: More than a quarter-final exit against Villarreal

This is – unsurprisingly – how the player sees it too. What is clear is that there has to be more in the Champions League next season than a quarter-final exit at Villarreal. Mané, who lost the final to Real Madrid with Liverpool in May, is confident: “I think we will go far. That was also a reason to come here. “

Early on Wednesday evening, Mané was due to visit a house in Grünwald, and tomorrow he can continue his recovery from another energy-sapping season. After his holiday in Mallorca, Mané is expected to really step on the gas at the beginning of July – then at Säbener Straße and without a translator.