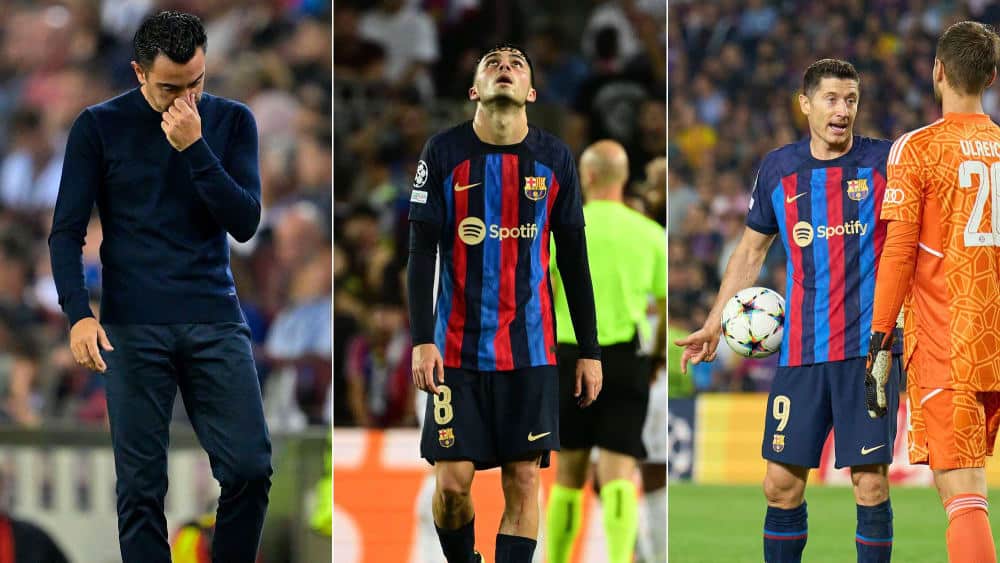 FC Barcelona failed in the group stage of the Champions League for the second time in a row. There was clear criticism from all directions after the 0:3 against Bayern

Even for someone who had not been able to follow a second of Bayern’s 3-0 in Barcelona, it was a clear affair when looking at the statistics. The Catalans, who had developed so much offensive power recently in the 3-0 win over Villarreal and the 4-0 win over Bilbao, remained without a single shot on goal in 90 minutes against the German record champions.

Of nine shots, seven were blocked, which on the one hand speaks for Bayern’s attentive work against the ball, but on the other hand also for the penetrating power of the once again pale Robert Lewandowski and his colleagues. Two attempts flew over the goal, exemplified by the weak finish of veteran Sergio Busquets, who chased the ball into Barcelona’s night sky from almost 20 metres after 53 minutes.

By comparison: Eight of Bayern’s 14 shots forced national keeper Marc-André ter Stegen to intervene, three of which also found their target. It was only the third time since the introduction of the Champions League that Barcelona had failed to score a goal. The other two nights to forget came in pre-season – a 3-0 defeat at home to Bayern (Lewandowski scored twice for the Munich side) and a 3-0 loss at Benfica Lisbon just two weeks later.

A defeat that “must have consequences “

The Madrid-based “Marca” saw a Munich side that “stripped Barça naked” – and a defeat that “must have consequences”. Head coach Xavi will not be affected (for now). President Joan Laporta stressed after the next blow: “We knew there would be ups and downs in this period of rebuilding.”

Xavi, who at times seemed almost at a loss and was always obviously at odds with his team’s play on the sidelines, spoke afterwards of a “slap in the face”. The words “blow”, “disgrace” and “great disappointment” also crossed his lips. “We have to recover from that,” he admitted, “the Champions League was cruel to Barça. “

Top-talent Pedri, who is supposed to help shape a new golden era in Barcelona, remained – unlike in the first leg – pale. And he was certainly not alone in this. But the current situation is also frustrating for him: “We have to improve a lot and practice self-criticism. Bayern’s dominant performance at Camp Nou prompted Pedri to make a harsh but entirely understandable judgement. “After what we saw today, it is clear that we are not ready to compete,” the midfielder clarified in reference to the premier class.

Above all, he said, for the fans who have been steadfast in their support of Barcelona despite the next disappointment, the team now needs to pick itself up quickly. “They deserve victories and titles,” Pedri said. On Saturday it’s off to Valencia. A win is almost a must then, so that the national championship does not already recede into the distance in the event of an expected home win by Real Madrid against Girona.