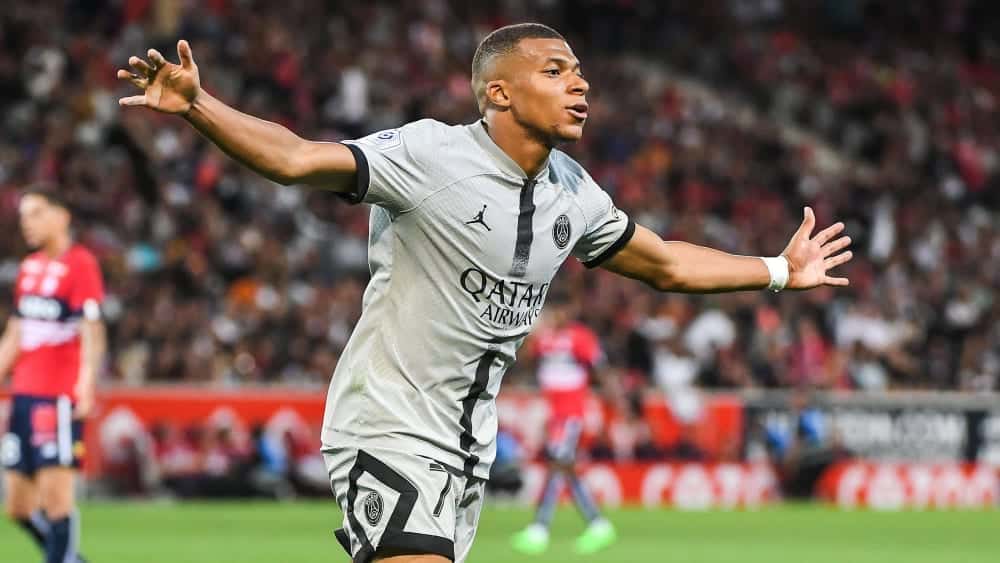 Paris Saint-Germain are in excellent early form – and their rivals Lille felt the effects. PSG came on strong and celebrated a 7:1 victory. Mbappé set the champions on the road to victory after just a few seconds.


PSG coach Christophe Galtier sent the same eleven onto the pitch as in the furious 5:2 against Montpellier. Neymar, Messi and Mbappé also promptly followed up the performance of the last league match.

Only eight seconds had elapsed when the ball hit the net after a lob from the Frenchman. Lille, who had fielded a new quartet (including Yazici for Cabella), were completely asleep to Messi’s lob into Mbappé’s path and were caught cold – the goal was the fastest since Opta started collecting data in France in 2006/07.

But the Great Danes were not shocked by the early goal. They tried to answer immediately, but found hardly any gaps against the PSG defence. Only shots from distance were possible, for example from Bamba (12th ) – but Donnarumma never had to intervene seriously. It became more dangerous on the opposite side: Whenever the Parisian offensive picked up speed, the hosts had big problems. This was also the case in the 9th minute when Neymar appeared free in the penalty area but missed from a promising position. His strike partner Mbappé did the same later on: although he got around Leo Jardim, he only hit the outside of the net from an acute angle (24th). The third offensive superstar was more efficient: After a double pass with Nuno Mendes, Messi easily slotted home the 2:0 (27.)

Hakimi and Neymar increase before the break

The Argentine had his feet in the game again in a dangerous action afterwards. Marquinhos headed just wide from his free-kick (31). Shortly before the break, the visitors were again more ruthless in front of goal. First Hakimi scored after a fine pass from Neymar to make it 3-0 (39th), then the Brazilian himself increased the lead to 4-0 (43rd) – the score at the break.


After the restart, the action remained unchanged. PSG turned up the heat at times, while Lille fell apart. The best example was Neymar’s 5:0: Alexsandro took far too long to clear the ball, so Hakimi sprinted in and served Mbappé in the centre. However, the latter cleverly let the ball through to Neymar, who scored his second goal (52nd).

But the five-goal lead did not last long. Practically in return, Bamba scored the consolation goal (54th) after a beautiful attack via Yazici and Ismaily. As the game progressed, Marquinhos in particular tried to score. But the defender failed with his best chance with a header against Leo Jardim (56.). Paris dropped down several gears in the final half-hour, but Neymar and Mbappé still showed their class twice, with the Frenchman scoring twice more (66th, 87th) after assists from the 30-year-old to make the final score 7:1.


This meant that the star ensemble from the French capital also won their third game of the season by a clear margin. In the first three games, the Galtier eleven scored 17 goals and conceded only three. PSG’s next match is next Sunday when Monaco visit the Parc des Princes (20:45). Lille visit AC Ajaccio on Friday