HomeFootballOn behalf of Her Majesty: How an investor made Almeria his subject
FootballFootball News 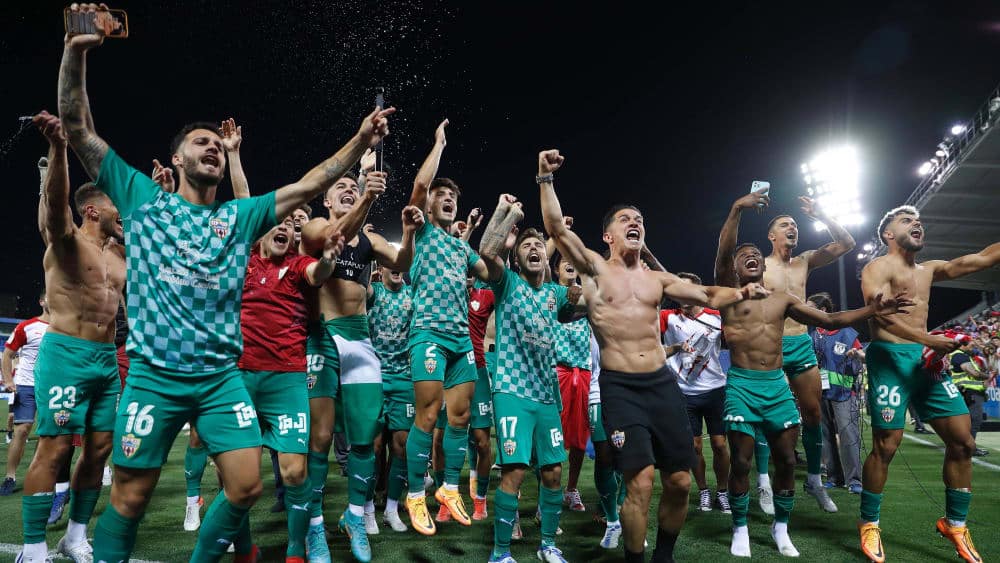 After relegation in 2015, UD Almeria is back in the Spanish first division, an investor from Saudi Arabia made it possible. With unusual as well as brutal methods.

They are a little behind schedule in Almeria. Turki Al-Sheikh, chairman of the “Saudi Authority for Entertainment” and owner of the club in the Arab city in the south of Spain since 2019, actually wanted to be in the big league by 2022, in other words, to be an international player. After three years, the club has now been promoted to La Liga. What has happened in Almeria since then? You could make a film about it. And maybe they will.

Perhaps it would start with a bird’s eye view of the “Estadio de los Juegos Mediterraneos”. Although that’s not quite right, it’s now called “Power Horse Stadium” thanks to an energy drink sponsor, which says quite a lot. Tradition is giving way to modernity – the arena is currently being transformed into a Champions League-level stadium.

And since Almeria is all about making money, Al-Sheikh is adding a few cherries to the cake. A music festival was held to inaugurate the first phase of construction, free for season ticket holders. He already had the “Rozam Music Festival” rising in the city in 2019. A fan zone with restaurants and recreational areas is planned, and the 41-year-old wants to renovate a discotheque in the harbour and open it to the public. PR at its best for the new boss, who, according to “El Confidencial”, lets employees address him as “Your Majesty”.

Al-Sheikh, however, excused himself from the stadium inauguration days earlier due to illness. “If I was not on the road to treatment and recovery, I would be the first to attend the ceremony, but my heart is with you. I love you, Almeria, and I love your good people,” he let slip from afar. Nevertheless, he is rarely seen in Almeria. But the bait has to be to the liking of the fish, not the angler. And Al-Sheikh throws out plenty of bait.

First coach to be sacked without a competitive match

New players and new coaches have been presented to Almeria at an almost breathtaking rate in recent years. At one point in the summer of 2019, there were 13 new arrivals in 22 days, including Arvin Appiah (€8.85 million) and current Liverpool attacker Darwin Nunez (€4 million), the second and seventh most expensive new signings in Spanish second division history respectively. Almeria brought in no fewer than 23 new arrivals this summer 2019, with countless players forced to leave the club. When those sorted out were coerced by the club to move to the Emirates the following winter to generate space for the next new additions, some fought back legally, according to Spanish media reports.

And the coaches? Already two days after Al-Sheikh’s takeover, the coach at the time, Oscar Fernandez, was recognised as a miscast. The bizarre thing was that he had not even managed a competitive match. Fernandez was only appointed in mid-June, after the end of the season.

The best-before date for his successors also quickly expired. In July 2020, the fifth coach was hired within a year, including former Real player Guti. “We have our new Galactic. Through the savannah comes Guti, our new king,” the buzzing Twitter channel read in November 2019. He was sent back to the desert at the end of June 2020. Successor José Gomes stayed on until April 2021, after all, before the right lid was finally found for Almeria’s bucket with promotion coach Rubi. Two sporting directors also lost their posts and were replaced by confidants of Al-Sheikh’s.

It’s not just the lunatic personnel decisions that are causing head-scratching. In September 2019, a change to the club’s logo was suddenly brought into the conversation via Twitter, with fans running up a storm – as hoped, one is tempted to say. “My opinion is: the current logo is very nice and I think we should not change it,” Al-Sheikh wrote. “I hope the management will not change it because it forms a part of the city. If asked, I am against changing it!!!” The hypocritical Al-Sheikh got what he wanted: “Gracias, Turki”, “Grande Turki”, was read in the comments. But some saw through the game. One fan posted a picture of the comic character Homer Simpson with a book in his hand. Title: Advanced Marketing.

Best advertising was also promised by the raffle of cars at Almeria’s home games, the number of season ticket holders and spectators increased immensely. A winner presented by Al-Sheikh on his Twitter account caused controversy. The woman wears a burqa, holds an Almeria jersey in her hand and praises Allah as well as the donor, of course. “I would like to thank Chancellor Turki Al-Sheikh for his kindness and wish that this video is successful.” Many pointed out at the time that in Al-Sheikh’s home country of Saudi Arabia, women’s rights are limited and female fans were not allowed into the stadium alone. The burqa also did not fit in with their club, the fans explained.

But most succumb to the glamour; everything glitters so beautifully with Al-Sheikh. In mid-September 2019, he invited several well-known coaches to Saudi Arabia, including Real Madrid’s former co-coach Aitor Karanka, Quique Setien, Pablo Machin and Julio Velazquez. He had discussed the philosophy of modern football with them in a “private meeting”, as he wrote in a group photo. According to “Marca”, however, the philosophy lesson came at a cost for Al-Sheikh.

Overarching everything is the so-called “Saudi Vision 2030”, which was presented in April 2016. With it, the kingdom wants to reduce its dependence on oil. On behalf of Crown Prince bin Salman, Al-Sheikh is authorised to make investments in the field of sports as part of this future project in order to open up new markets there. Saudi Arabia’s vision is to become an international competitive leader and venue for various sports. Newcastle United is also part of this.

In the meantime, things are going according to the Sheikhs’ taste in Almeria, the business seems to be gradually paying off. After all, the club only cost about 20 million euros. The club made 15 million euros alone by selling Darwin Nunez from Benfica Lisbon to Liverpool. “The market value of the club today is 150 million euros,” Al-Sheikh’s right-hand man Mohamed El Assy recently claimed in an interview with Al-Riyadia.


And in the city, Al-Sheikh is enjoying increasing popularity. Generous donations during the pandemic, music festivals, discos, first division football in the first-class stadium, the new club academy should also be ready in a year. His Majesty presents himself generously to the club and the people. The gifts pile up so high that issues such as the violation of fundamental and human rights in Saudi Arabia are overlooked. Al-Sheikh is even currently working on a documentary about UD Almeria through his contacts. Just like a film.

FC Pyramids as a warning example

But the tale of a thousand and one nights could just as easily become a horror flick – check Egypt: In the summer of 2018, Al-Sheikh acquired the football club Al Assiouty Sport, invested heavily in new players, moved the club to Cairo and renamed it FC Pyramids. After success failed to materialise, opposing fans regularly mocked his family and he was regarded as an “outsider and foreign body” (“FAZ”), he resigned in June 2019 after two warnings. Two months later he bought Almeria.

So what happens if the vision crumbles, if Almeria is possibly relegated again? How will Al-Sheikh, who journalist and compatriot Jamal Khashoggi, murdered in 2018, once characterised to Newsweek as “very aggressive” and who mayor Ramon Fernandez-Pacheco described as “lucky for Almeria”, react?

That the 41-year-old does not always have the sun in his heart was shown in February 2022, when Almeria once again faltered in their fight for promotion. “Although I am far away, I control the behaviour of all Almeria players because I know all the nightlife places in the city of Almeria,” he wrote via Twitter. Even in Malaga, a two-hour drive away, “no one should doubt that I also control the places there”.

That the impulsive Al-Sheikh cannot accept defeat is well known. “That’s true,” even Al-Assy says. “I agree with him that you don’t have to accept defeat as long as the means to succeed are there.”

But if, despite all the means, things do not go as desired, Almeria face a story without a happy ending. The promoted team already has the spotlight on the first matchday – Real Madrid are guests at the “Power Horse Stadium”. An opponent that should be entirely to Al-Sheikh’s taste.