HomeBundesligaNagelsmann on Wanner: "... then the door is open for him"
Bundesliga

Nagelsmann on Wanner: “… then the door is open for him” 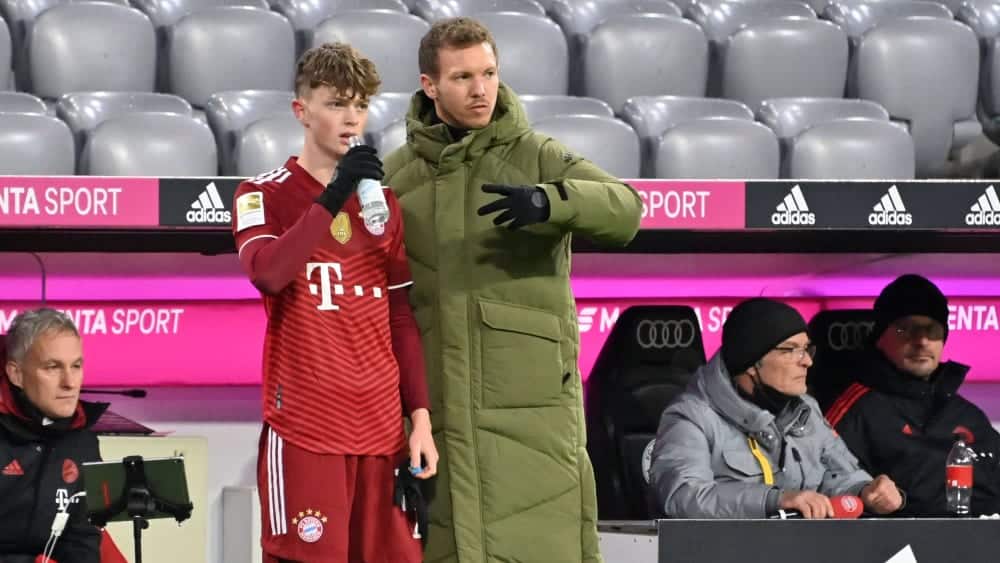 Paul Wanner (16) unexpectedly made his Bundesliga debut on Friday, is now Bayern’s new record player and was effusively praised by coach Julian Nagelsmann – but also warned.

The time had come in the 75th minute: Nagelsmann gave him a few final instructions, then Wanner stepped onto the pitch together with 17-year-old Lucas Copado. Wanner, only 16 since 23 December, replaced Jamal Musiala as the youngest Bayern professional in Bundesliga history.

And the duo were in no way just extras. “The two boys who came in did well, made a good impression,” Nagelsmann praised at the press conference. The lively Wanner was again explicitly addressed by Bayern’s head coach.

“You’ve seen it for yourself,” said Nagelsmann, paused briefly and grinned: “He has to keep a clear head, then the door is open for him. If he doesn’t keep a clear head, it will close again quickly.” Wanner had ten ball contacts, reeled off 2.45 km, delivered three of his four passes to the man and won 60 per cent of his duels.

“He is an incredible talent, left foot, very fast, very ball-secure, courageous,” Nagelsmann went into raptures. “The first action was, I think, a dribble on the wing against Embolo, who is not quite so bad now physically and speed-wise. “

Wanner was an “outstanding player for his new boss, but up here it’s decided where it goes. Downstairs, he can do it all.” It remains to be seen how many Bundesliga appearances will be added in the second half of the season.