HomeMotorsportsMarquez fourth in Motegi: "Didn't feel any pain, that's the most important...
Motorsports 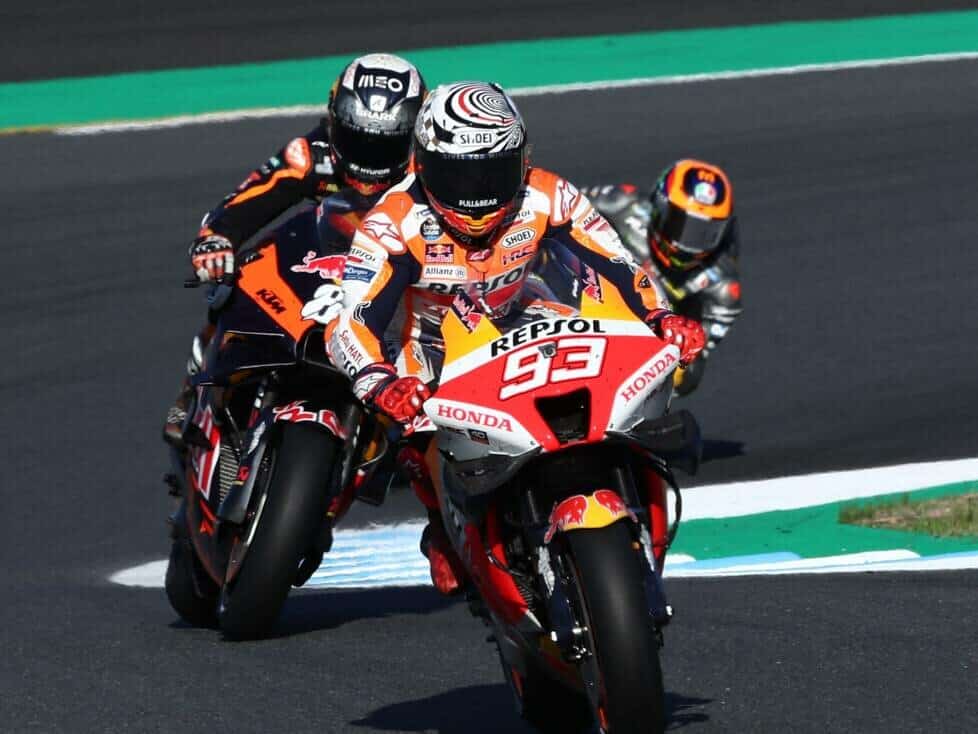 After his comeback race in Aragon lasted just one lap, things went much better for Marc Marquez at the Japanese Grand Prix. First the Honda rider claimed his first pole position since 2019 in the rain, then levelled his best result of the season so far by finishing fourth in the race.

“I’m really happy because it was a solid race, a consistent race, but the most important thing is that I didn’t have any pain during the whole race,” said Marquez, referring to his quadruple surgery on his upper right arm.

“I did feel that the arm was sluggish. I felt tired at the end, but I didn’t have any pain and that’s the most important thing for me. For this reason I was able to attack Oliveira in the last laps,” the Spaniard continued.

Marquez only tired, but no pain

For most of the race, Marquez was in fifth place after dropping back more in the early corners. But in the closing stages he was able to catch up with KTM rider Miguel Oliveira and overtake him for fourth place.

“It’s been a long time since I felt like I could attack someone in the last laps because the pain was always there and it was difficult to keep the concentration in the past,” Marquez admits. “But today I didn’t have any pain, I just felt tired but everything was under control.”

Still on the grid, the eight-time world champion had switched from the hard to the soft rear tyre in order to be able to attack in the early stages. But a mapping problem initially put a spanner in his works.

“The only unfortunate point in the race was that I wanted to attack with the soft rear tyre at the beginning, but I had a small problem on the first lap, lost a lot of time and many riders overtook me,” confirmed Marquez.

“Luckily I then changed the mapping and the problem disappeared. It was a very small problem, but when you are in a big group it affects things a lot. But from that point on my race started and I’m happy. “

Not only for the 29-year-old, but also for Honda, fourth place was finally a sense of achievement. In the pits, Marquez was greeted with applause: “Of course, this is a boost for self-confidence. But we have to keep calm.” Because he knows about the special circumstances in Motegi.

Not fourth under normal circumstances

“As I said on Friday, the weaknesses of our bike are less evident on this track. That’s why I was fast from the first practice. We rode almost the same bike in as Aragon, but we were closer to the others,” Marquez sees the crisis far from over.

“It’s also true, of course, that the rain on Saturday helped me to stay fresh and start from pole position. On a normal weekend we would probably have been seventh, eighth or ninth, not fourth.”

As for his right arm and the level he can achieve with it, the Spaniard admits he is not yet at 100 per cent. “For the one-lap time attack, I’m not far from riding the way I want to.”

“But doing a consistent pace and controlling the moments you don’t expect – when the bike gets bumpy on the brakes or when changing direction – that’s where I can still improve. But it’s also only the second race,” Marquez analyses.

He said one example of what still needs to be done was his crash in the warm-up on Sunday morning. “That’s one of the things I’m struggling with more this year. In the past I often had those moments on the front wheel and I was used to riding the Honda like that,” he looked back.

“In the warm-up I wasn’t over the limit but just crashed like that. In the past I could catch it or there were warnings before the front locked up. In Aragon I had a similar crash in the same place, at the same angle. “

“So on that point I still lack information. I was lucky to crash in the warm-up because it was a left turn. I had a good feeling there and when you have a good feeling you push more. If it hadn’t happened in warm-up, I would have very likely crashed there in the race.”

Asked if he will be the “old” Marquez from before the surgeries, the 29-year-old shrugs it off. “After all, it’s about two different things: the level of the arm and the level of the bike. We know the arm will be better with more kilometres and we know we have to improve the bike.”

“But to ride like we did in 2019? We are not in 2019 anymore, it’s 2022. The bikes have changed a lot. In today’s MotoGP, the bike is becoming more and more important. At the same time, it’s also getting harder and harder to overtake.”

“When you ride behind another rider, you can’t brake properly because you don’t have the aero effect. That’s exactly why you have more wheelies. Before it was easier to follow someone else. Now it’s okay on one lap, but over the race distance it’s difficult,” the Honda rider notes.