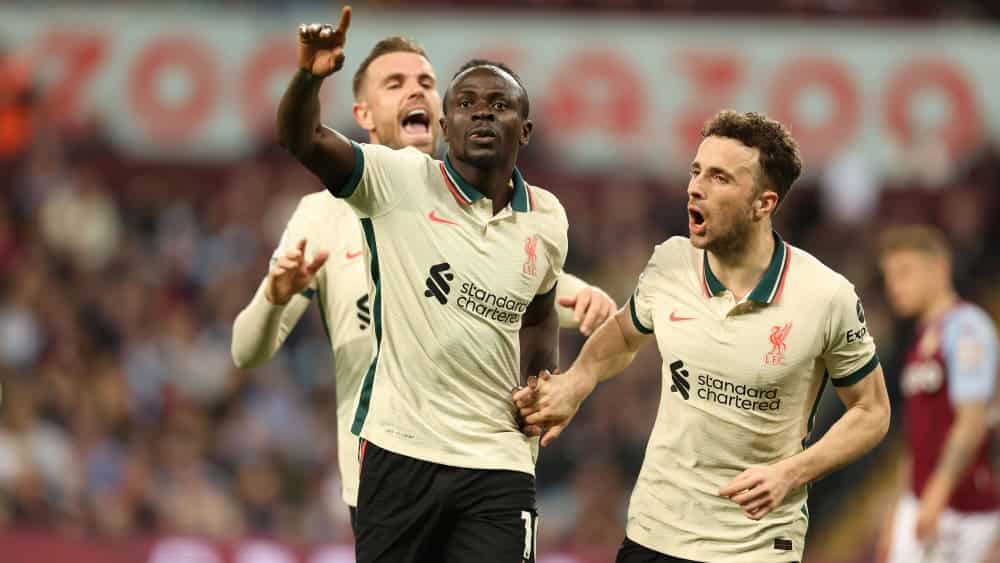 Liverpool FC earned an important win at Aston Villa in a post-match tie to draw level on points with leaders ManCity. But the Reds struggled for a long time against the brash Villans.

It was all business from the first action, partly because the home side were immediately aggressive against the Reds. Jürgen Klopp, who started with five new players (Matip, Tsimikas, Keita, Jones and Diogo Jota) compared to the 1-1 draw against Tottenham (Konaté, Henderson, Thiago, Salah and Robertson were spared (for the time being)), saw the first goal in the third minute. But it rang in the visitors’ goal after Douglas Luiz followed up Alisson’s save and scored from close range. The lead lasted only a short time, however, as Matip replied with the 1-1 score (6th) after a free-kick was not cleared by Villa.

A lively exchange of blows developed. The high tempo from the furious opening minutes did not abate at first, but actions near the goal became less. The Reds then increasingly got a better grip on the game and created good chances through Mané (20th) and Keita (35th), but lost midfielder Fabinho, who injured his thigh and had to be replaced by Henderson after half an hour. The tempo and intensity dropped a little by the break, partly because the Villans seemed to want to salvage the draw and defended tightly.

Mané turns the game around

The picture was the same after the break: The home side were looking for counter-attacks and made life difficult for the Reds’ attack. Two free kicks by Alexander-Arnold (48th, 57th) brought the first danger in the second half, but Liverpool were unable to break through from the play. Therefore, the next goal came out of nowhere: Mané headed a cross from Luis Diaz over the line for 2:1 (65.).

After that, the game picked up again, Ings suddenly appeared free in front of Alisson, but failed to beat the keeper (69.). On the other side, Matip tested Martinez after a corner (76.), as did Keita from the second row (82.). In the final minutes, the Villans came up with two good chances through Ings – but the attacker first found his master in Alisson (84th) and then was offside (86th).

Liverpool simply wanted to get the last minutes over time – and did so successfully, because Aston Villa lacked the means to become dangerous again. The Reds are now level on points with leaders City, but must continue to hope for a slip-up from their rivals, who have played one game less.


The FA Cup final is between Liverpool and Chelsea on Saturday (5.45pm). Aston Villa host Crystal Palace in a league match on Sunday (3pm).