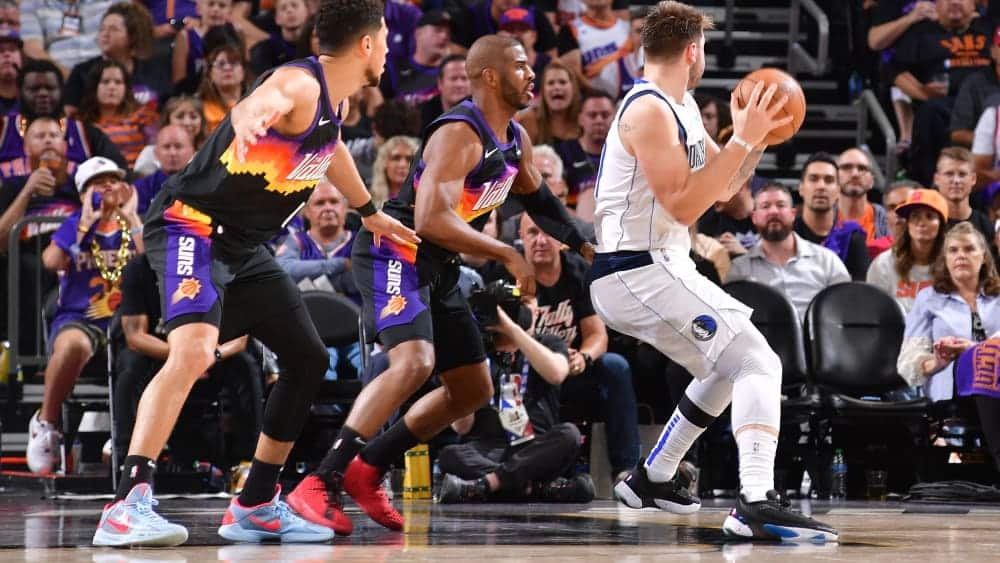 A comeback in the final quarter was not enough: The Dallas Mavericks lost their opening game at the West-leading Phoenix Suns despite strong scenes from Luka Doncic and Maxi Kleber.


The Mavericks fell 114-121 at Phoenix in their Western Conference semi-final opener. The Texans trailed by ten to 15 points for most of the game against the title favourites and only managed to cause a little bit of nervousness for Suns fans at the very end when they pulled to within six points.

Doncic with 45 points and 12 rebounds and Kleber with 19 points on five converted threes had the best record in the box score watched by Dirk Nowitzki, but overall the Mavericks offense was not strong enough for the Suns for too long.

“Maxi and Luka kept us alive in the first half. We could have been down by 30. We just need someone to join the party,” Mavericks coach Jason Kidd criticised. “We need to be better at talking to each other. That’s where we did a really lousy job today,” Kleber said, talking about how the Mavericks were intimidated by the volume in Phoenix in the first half.

In the last quarter, the Würzburg player fell dangerously on his upper back after a successful dunk, the scene causing consternation in the Footprint Center in Phoenix at first. Kleber, however, quickly picked himself up.

Six players reached double figures for the hosts, with Deandre Ayton’s 25 points and Devin Booker’s 23 points the most successful. The Suns’ team play in particular was more effective (27 assists – only 16 for the Mavericks). “We trusted each other and played together,” Ayton said after the game.

The next meeting is in Phoenix again on Thursday night (4.00 am CEST), then it continues with two games in Dallas. Four wins will lead to advancement and a clash with the winner of the Memphis Grizzlies vs Golden State Warriors series. In this series, the Warriors lead 1:0.

In the East, the Miami Heat started the semi-final series with an unchallenged home win against the Philadelphia 76ers. Tyler Herro, who scored 25 points as a substitute, was particularly convincing in the 106-92 win. The 76ers were without their injured star centre Joel Embiid for most of the game and were not equal to the hosts except for a phase shortly after the break.

In addition to Herro, Bam Adebayo came up trumps for the Heat with 24 points and twelve rebounds. The 76ers got most of their points from Tobias Harris (27). Embiid is recovering from a fractured eye socket and concussion suffered in last week’s game against the Toronto Raptors. He is still expected to miss Wednesday’s second game.