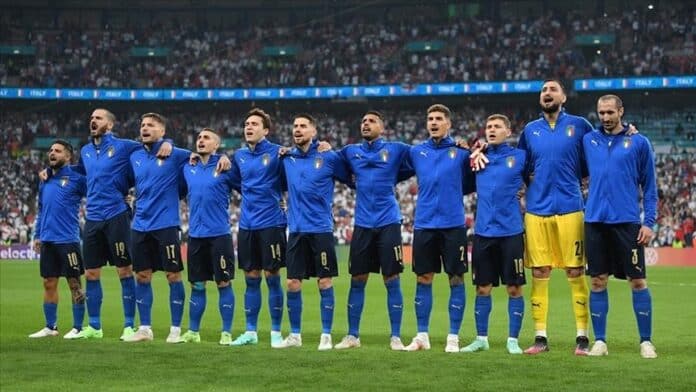 Hungary had risen directly to a surprise in the 1:0 over England and also kept up well in the second Nations League match in Italy. The Azzurri, however, were ultimately too much for them in a 2-1 win.

Italy coach Roberto Mancini – last seen in the Nations League opener with a 1-1 draw against Germany – should not have had much to complain about. His team, with starting debutant Gnonto (18, second senior international), was superior for long stretches in the clash with outsiders Hungary, set the tone and often attracted attention with beautiful combinations in the small stadium in Cesena.

The logical consequence, even if Hungary around the Italian coach Marco Rossi (at the Nations League start with a 1:0 against England) also countered well and had a few pinpricks ready: goals for the Squadra Azzurra, which had gone through a rollercoaster ride in the past eleven months with the European Championship title in England and the World Cup exit in the play-offs against North Macedonia.

First, Cristante opened the scoring with a fine chip into the back of the defence, at the end of which the crowd favourite Spinazzolla, fit again after rupturing his Achilles tendon, laid off for Barella. The Inter professional took the shot – and slightly deflected the ball into the top left corner (30th minute).

But that was not all: In an Italian storm and stress phase shortly before the break, the 2:0 was not only in the air several times, it was also to come in the 45th minute. Politano, with his technique and speed, dribbled his way to the baseline on the right before crossing into the middle. There, the ever-present youngster Gnonto (trained at Inter, currently under contract with FC Zurich and, as a highly talented player, apparently being chased by some big clubs these days) deliberately and very cleverly let pass, so that Pellegrini had the empty goal in front of him at his back and finished from full stretch to make it 2-0.

A kind of preliminary decision had been made, although the Hungarian national team around former Mainz player Szalai (currently FC Basel) or Leipzig’s Szoboszlai did not give up and even got new hope after an unfortunate own goal by Mancini (61.). But because Freiburg’s Sallai completely lost the private duel with the strong Donnarumma with a couple of decent finishes on this evening (around 26th or also 69th), there was no more chance of a point being gained.

As Germany and England drew 1-1 in the parallel match of the Nations League Group 3 (League A), Italy also went top of the table with this well-deserved three-goal win, which they managed to hold up well in the end.