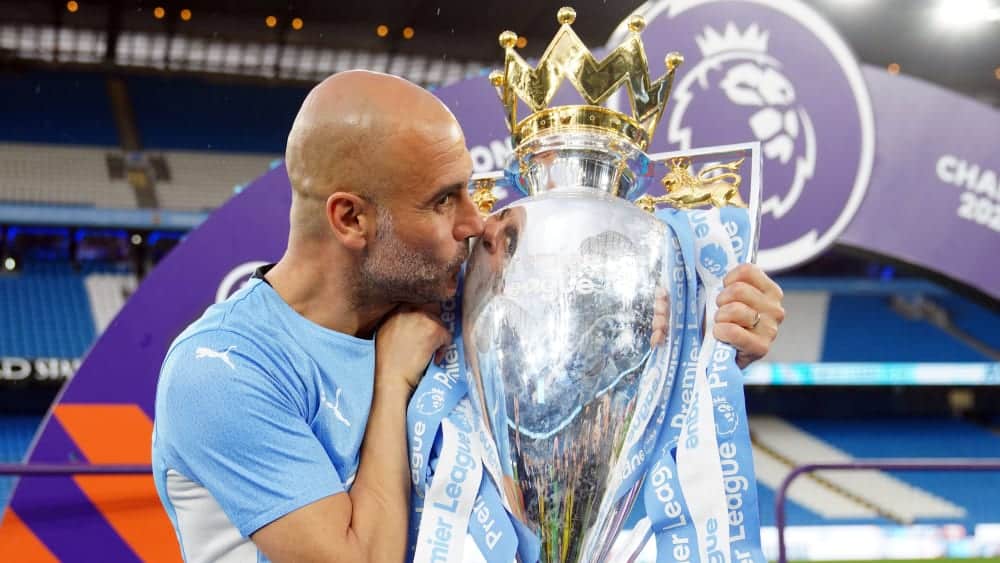 “I’m not saying the Premier League is better than the Champions League, but …”: Pep Guardiola on a special championship with Manchester City – and a special rival.

Pep Guardiola is certainly one of the more emotional coaches in the football world, but who wouldn’t have cried after this match? When the whistle blew on Manchester City’s 3-2 win over Aston Villa, the Catalan burst into tears and rushed to the dressing room.


14 minutes from time his side, condemned to win, had trailed 2-0; suddenly it had been the title defence that would have amounted to a miracle, not Liverpool’s last-minute championship. But led by substitute Ilkay Gündogan, City scored three times in five minutes and 36 seconds.

Guardiola’s tennis comparison in a league “that doesn’t lie “

“We are legends,” Guardiola spoke as he reappeared with a dry face. “We will be remembered. These guys are legends, people have to admit that. At this club they are immortal.” February 2005 was the last time ManCity had turned around a 2-0 deficit in the league, but what does that mean when you hardly ever fall 2-0 behind?

Guardiola, now champion for the tenth time in his 13th season as coach, chose a tennis comparison. “We always talk about the big dates. But where was that today? It was a completely different game than usual. It’s like serving for a Wimbledon triumph – it’s the hardest service game,” said the 51-year-old, who had tried to impress upon his players before the match that a normal league match awaited them.

“We were lucky,” Guardiola continued. “I’m not saying the Premier League is better than the Champions League, but the league is honest, it doesn’t lie. There are 38 games, home and away, full of problems.” That ManCity have now won it for the fourth time in five years is perhaps “the best thing we have achieved in our careers”. That, he said, would become clear to you “in four or five years”.

As his team were once again far from uncompetitive. “I want to congratulate Liverpool for this incredible fight,” Guardiola said, marvelling at the runners-up beaten by a point. “Our performance is linked to the size of our rival. We were just one inch better than them, they are also winners. I have never seen a team like Liverpool in my whole life. They have helped us season after season to become a better team. “

While Liverpool will hold a winners’ parade next Sunday – regardless of the outcome of the Champions League final the day before – ManCity’s professionals will have their turn this Monday. “Hopefully we will celebrate tomorrow with cigars and beer,” Guardiola said on Sunday. “I will bring my cigars, don’t worry.”

He did not want to think about his future at ManCity just yet in the flush of victory. Asked if he would now extend his contract, which expires in 2023, he replied, “Golf for now! I need this!”