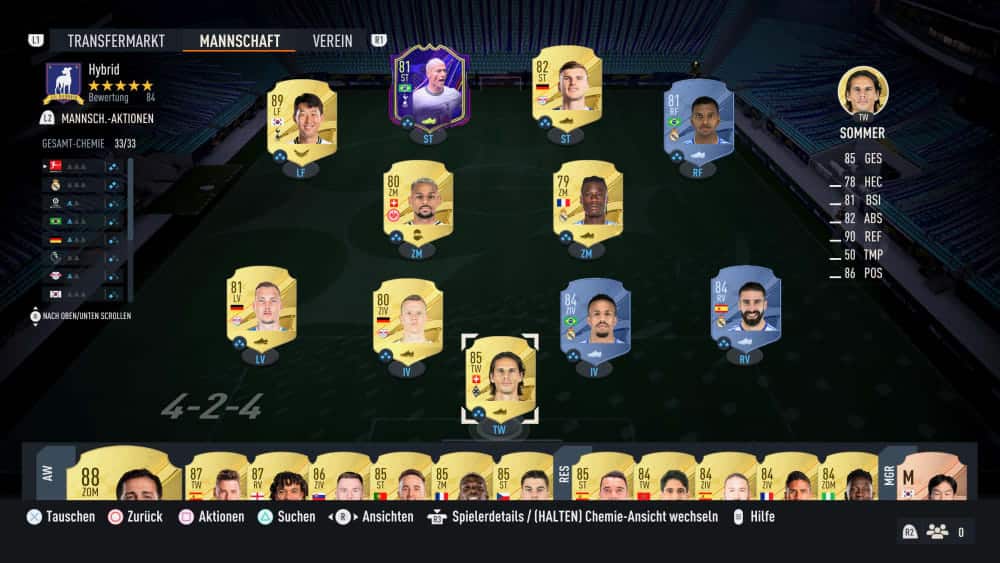 The first week of FIFA 23 is coming to an end and the first Weekend League is just around the corner. To make sure that the team building will be successful, we give you three important hints on the way.


We want to start with the new chemistry system in FIFA 23, which gives you some freedom, because players don’t have to be lined up next to each other to get chemistry points. The familiar “links” between the players are no longer necessary, instead there are up to three points per player.

To fill them up as efficiently as possible, however, you can still make use of a mechanic known as the “Perfect Link” in previous FIFAs. This is created when two players from the same nation are on the pitch and play for the same club at the same time. At Chelsea, for example, you will find such a combination with Edouard Mendy and Kalidou Koulibaly.

If you use the Perfect Link, both players start with at least two of three chemistry points and thus secure boosts to their base values that would not be available with one chemistry point. The highlight of the new chemistry system is that you can take these advantages even if your players are not standing directly next to each other. For example, you can fill your wing positions with Vinicius Junior and Rodrygo and also start the game with two chemistry points on both cards.

Of course, this principle can also be extended – with even greater advantages. If you use another player from the same nation and the same club, all three players automatically start with three chemistry points. For example, with the three Leipzig players Timo Werner, Lukas Klostermann and David Raum, you get a triangle with full chemistry.

If you have problems getting one of your players to three chemistry points, our second tip comes into play: the right choice of coach. Because the coach’s effect on your players’ chemistry has also changed. In previous editions, the man on the sidelines gave one chemistry point each for all players of the same nation and the same league.

In FIFA 23, however, your coach now counts as a twelfth man on the pitch to account for the lower number of chemistry points compared to the predecessor. After all, a plus of one chemistry point at three total points means significantly more than at ten total points, as it was until last year.

Nevertheless, you can close crucial gaps in the chemistry corset with the right choice of coach. Especially with regard to players from more unusual nations. Because in the new chemistry system, you get a point as soon as two players of the same origin are in the team. If, for example, you are one point short with Heung-Min Son, you can immediately add him with a manager from South Korea.

You can also use the aforementioned triangular formation with your coach. If you want to do without Werner in the forwards, but continue to play Klostermann and Raum, a Bundesliga coach is enough to bring them both up to three chemistry points.

If you manage to get as many players in your starting eleven to maximum chemistry as possible, you will benefit the most from our third tip: Chemstyles. The equipment items determine in which areas your players receive boosts. Of course, they should be chosen according to the position a player will play in the game. Equipping a striker with a shadow that increases speed and defence makes only limited sense.

So check in advance which chemstyles boost which values of your cards. Sites like Futbin are particularly helpful here. On these sites you can see in detail how one of your players improves with a chemstyle. For example, if Klostermann has a basic chemstyle, he receives boosts that raise him to the level of a centre-back with an 83 overall rating. If you equip a sentinel that boosts defence and physique, he will have stats of a centre-back with an 86 rating.

Finally, you can currently secure a relevant advantage with the right chemstyle. Because the right choice offers the possibility to turn your players into real meta cards. This is due to the new acceleration types, of which the long-lasting type is particularly effective. Equipped with the right chemstyle, you can help some players to achieve this acceleration type and thus outpace one or two opponents who should actually be faster. We’ll explain how you can do this here.