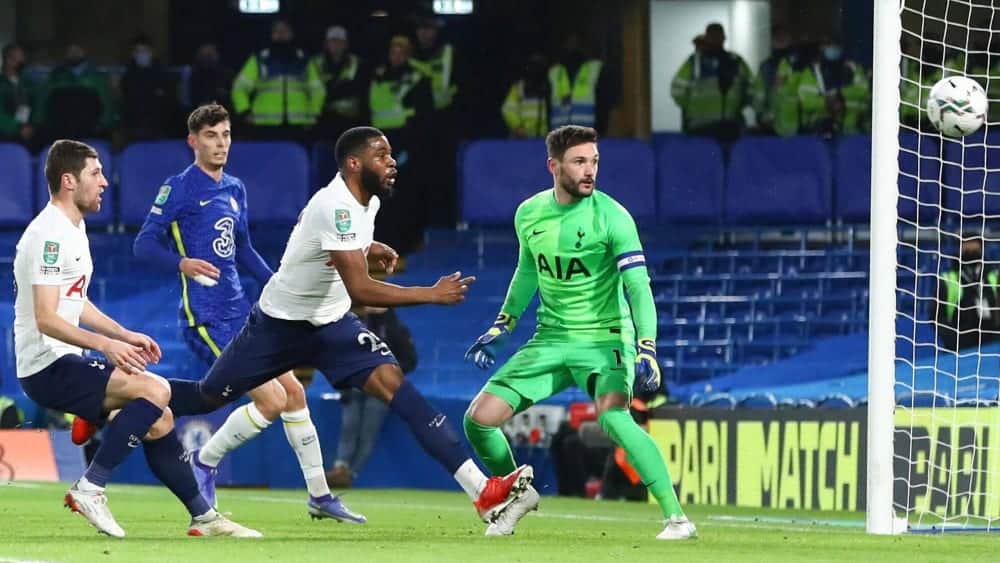 Chelsea FC hosted their great rivals Tottenham in the semi-finals of the League Cup. The Tuchel eleven dominated throughout the entire match and prevailed in a commanding manner. An early goal by Havertz and a more than unfortunate own goal made the difference.

Thomas Tuchel brought on six fresh starters for the Blues after the 2-2 draw with Liverpool. Thiago Silva, Chalobah, Kanté, Kovacic and Pulisic were replaced by Sarr, Saul Niguez, Jorginho, Ziyech and Lukaku. The latter returned directly to the starting line-up after his public criticism. With regular keeper Mendy also at the Africa Cup, Kepa was in charge. Werner was part of the Chelsea squad for the first time since 11 December, but took a seat on the bench for the time being.

Antonio Conte, on the other hand, had two fresh players in the starting line-up after the narrow 1-0 win over Watford on New Year’s Day. Doherty and Tanganga started for Dier, who was missing from the line-up, and Reguilon (bench).

Antonio Conte’s return to Stamford Bridge could not have started worse. Spurs missed the start and conceded a quick goal after a ball loss in the build-up through Havertz, who scored his fifth goal in the third League Cup match (5th) – one less than in his 42 Premier League appearances. Even after the home side’s early goal, the visitors could hardly find their way into the game against a dominant Chelsea side. After Havertz’s missed chance for a brace (12th), the home side slowed down a bit, but still had a dominant presence in the game.

Tanganga prepares on the wrong side for Davies

Rüdiger then had the next opportunity, but he failed to hit the outside of the net (33.). The second goal of the Blues described the performance of Conte’s eleven quite well: After a cross from the right, the unsafe Tanganga headed his teammate Davies about five metres in front of his own goal, from whose body the ball crossed the line (34.). Lukaku would then miss the 3-0 before the break (42nd) before Spurs went into the catacombs trailing 2-0.

Werner comes on but misses the wild card goal

Havertz, the goalscorer for the 1-0 lead, did not see out the second half on the pitch, making way for Werner, who was making his comeback from his Corona illness. After Tottenham showed some improvement in the first few minutes, Chelsea took control of the game again, but Ziyech (54th) and Werner both missed in promising positions for a 3-0 lead (67th). The game also lost more and more tempo as time went on, as Chelsea, with the lead behind them, felt little urge to take risks. Nevertheless, Tottenham did not find their way into the game and Ziyech missed the next chance to put the ball in the net after a nice combination (77th).

Chelsea did not let anything happen and kept the 2-0 advantage – the only exception was the first and last big chance of Spurs, which Kepa thwarted (89.). Tottenham are now in a difficult position going into the second leg, which takes place next Wednesday, 12 January at 20:45. Before that, both teams will play in the FA Cup at the weekend: Chelsea will host Chesterfield on Saturday at 6.30 pm, Tottenham will play FC Morecambe on Sunday at 3 pm.