Chelsea vs Liverpool EPL: Can Maurizio Sarri make it two out of two against Jurgen Klopp? 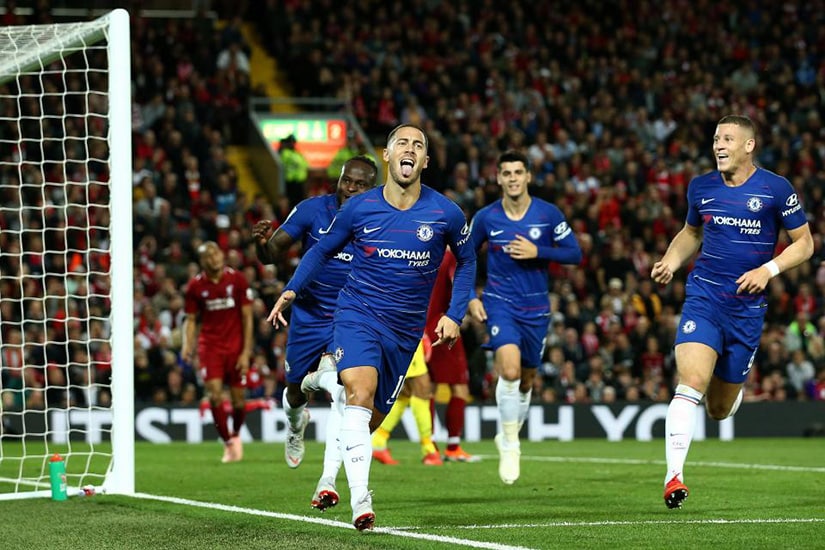 Liverpool lost a total of five PL games last season. One of them was in London. They started the new season without a single blemish on their record, but that didn’t stop Chelsea from coming to Anfield and eliminating The Reds from the Carabao Cup. Can Sarri make it two out of two against Jurgen Klopp? We’re about to find out on Saturday afternoon at 18:30 CET.

Bet on Chelsea vs Liverpool with bet365

This time, the teams will square off at Stamford Bridge, where Chelsea haven’t lost since April. The duel will be fascinating to watch. Chelsea players are enjoying life under Maurizio Sarri as much as Liverpool players are enjoying life under Jurgen Klopp. The Blues are just two points behind Liverpool on the PL table, slipping for the first time last weekend against city rivals West Ham United. Meanwhile, The Reds are a perfect six out of six coming into the contest.

Klopp’s boys thought they had another win in the bag on Wednesday, before Emerson Palmieri’s debut goal and Eden Hazard’s magnificent solo effort knocked Liverpool out of the Carabao Cup and gave the team their first taste of defeat this season. Mohamed Salah did not enter the pitch until the 87th minute when it was too little too late. He’ll definitely be there from the start on Saturday, rested, highly motivated and vengeful.

Liverpool haven’t had much success against Chelsea recently, with only two wins in their last 15 encounters. However, both of them came on the road in the two seasons prior to last one. Eight of those 15 games ended in draws, but not one finished goalless (other than a cup match in 2015 which Chelsea won 1-0 in extra time).

Chelsea have a renewed confidence with Maurizio Sarri and it’s getting stronger by the day. Liverpool will not take their defeat lightly. They have grown so accustomed to winning over the last two years that every loss hurts twice as much as it did before. On paper, it looks like Chelsea should be no match for a well-trained, healthy and motivated Liverpool squad, but based on what we’ve seen from The Blues under Sarri, we should never count them out.