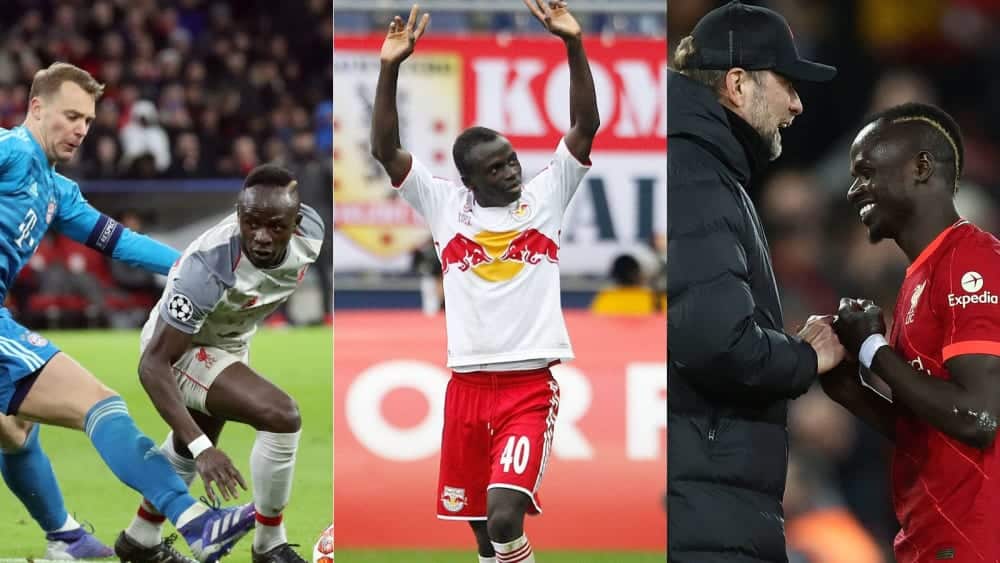 A Bayern fright becomes Bayern pro: stories and figures about Sadio Mané – who almost ended up in the Bundesliga once.

Mané has already hurt Julian Nagelsmann twice. In the 2017/18 Champions League play-offs, Liverpool clearly beat Nagelsmann’s Hoffenheim side thanks in part to Mané (2:1/4:2), Mané excelling especially in the first leg. In the reunion in the 2020/21 round of 16 against Nagelsmann’s Leipzig side, he scores in both the first and second legs (2:0 each).

Mané almost ended up at Dortmund in 2014. “I don’t know exactly why I didn’t sign him at the time,” Jürgen Klopp later said of this “mistake”. “I like the player, it was more a feeling. Around three months later I could have beaten myself up for it.” BVB instead brought back Shinji Kagawa from Manchester United, while Mané moved from Salzburg to Southampton.

Mané is an attacking all-rounder. He played on the right in his first Liverpool season but switched permanently to the left after Mohamed Salah’s arrival in 2017 and has also been used as a central striker on and off recently. “He is world class in both positions,” Klopp thinks.

Adi Hütter suspended Mané in 2014. Just before the all-important Champions League play-off second leg in Malmö, Mané feels unable to train and does not turn up for a subsequent meeting. Sporting director Ralf Rangnick and coach Hütter fume (“Indiscipline!”) and remove him from the squad. Salzburg miss out on the top flight, Mané gets his way: He moves to Southampton.

Klopp regretted his first cheer with Mané. In Liverpool’s 4-3 win at Arsenal on Matchday 1 of the 2016/17 season, Reds debutant Mané scores to make it 4-1 in the interim – Klopp then piggybacks him on the touchline. The coach therefore takes it on himself afterwards that Arsenal come back afterwards: “It’s not allowed to cheer like I did.”

Mané scored the fastest hat-trick in Premier League history He scored three times (13th/14th/16th) in 176 seconds in Southampton’s 6-1 win over Aston Villa on 16 May 2015 – as an attacking midfielder, incidentally.

Mané is about to make his second World Cup appearance, the first ended tragically

Mané is no penalty-taking expert. Although he scored Senegal’s 2022 Africa Cup triumph in a penalty shoot-out against Egypt and the World Cup in Qatar, he missed his only two Premier League penalties – once against (2016), once for Liverpool (2018). Klopp later blames himself for being the only Liverpool player to miss a penalty in the 2022 FA Cup final against Chelsea.

Mané’s only World Cup appearance to date ends in tragedy. Senegal fail to reach the group stage in Russia 2018 due to a lower fair play rating against Japan. Mané at least scored his first World Cup goal in the 2:2 draw against Japan. He will be back with Senegal in 2022, when they will face the Netherlands, Ecuador and hosts Qatar.


Mané played twice at the Allianz Arena – and scored twice. In 2017 he scored the opening goal in Liverpool’s 3-0 win over Bayern in the Audi Cup semi-final, and in 2019 – more momentously – he scored a brace in the second leg of the Champions League last 16 (3-1). He was a Bayern terror much earlier, though.

Mané spoiled Pep Guardiola’s 43rd birthday. On 18 January 2014, Salzburg shot down coach Guardiola’s Bayern 3-0 in a test match, with Mané involved in all three goals. “I felt sorry for the Bayern defenders that day – he was unstoppable,” teammate Ramalho later recalled.

Mané has not forgotten his homeland. The street footballer has already financed a hospital, a school and also a mosque in his hometown of Bambali in south-western Senegal. In this one hangs a picture of his father, who was an imam and died when Mané was eleven.

Counter-pressing was not something Mané learned under Klopp. Under Roger Schmidt, his first coach in Salzburg, he made a big leap forward tactically. “He had a big influence on my career,” Mané says of Schmidt. “I learned a lot about tactics. “