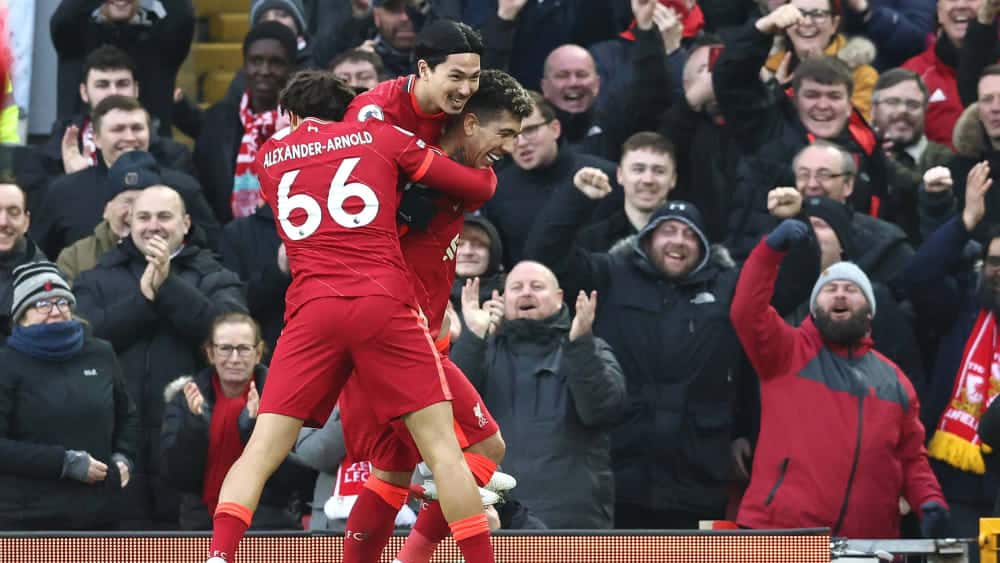 Manchester City made another strong case for defending their title with a 1-0 win over Chelsea on Saturday, but Liverpool FC remain in the race – at least the race to get within sight of the leaders again this season. Jürgen Klopp’s team beat Brentford FC 3-0 after only one win from six competitive matches previously.

Without Africa Cup players Salah, Mané and Keita, the Reds again struggled at the start despite a clear advantage in possession. Van Dijk had the lead on his feet after a corner, but failed to beat keeper Alvaro Fernandez, who had sailed past the cross (22nd). Inaccuracies up front and at the back – Toney missed narrowly after Matip’s misplaced pass (39th) – prevented Liverpool from really getting into the flow of the game.

Just before the break, however, an Alexander Arnold corner slipped past everyone to Fabinho at the second post, who was quick to react and head in (44th). Brentford came close to equalising once after the break when Mbeumo failed to finish a Nörgaard dream pass (58th), but it was still shaping up to be a deserved home victory, which Oxlade-Chamberlain would eventually make perfect.

After Diogo Jota had first hit the post (62nd) and then Alvaro Fernandez in a one-on-one (67th), “The Ox” headed Robertson’s half-field cross into the net from a few metres out to make it 2-0 (69th). Klopp had given the winger preference over Minamino for the meagre 0-0 draw in the League Cup semi-final first leg against Arsenal.

Four minutes later, on his 27th birthday, the Japanese player came on for the goalscorer – and scored another three minutes after that to make it 3-0 (77th): Brentford executed a clearance poorly, Roberto Firmino sprinted in between and set up Minamino for the final decision. The 17-year-old Gordon, who was making his Premier League debut, missed the 4:0 goal alone in front of Alvaro Fernandez (88th).


The Reds thus kept their deficit to ManCity at 13 points – with one game less – and ended their recent low with aplomb. A nice gesture on the side: At Anfield, there were encouraging chants for Liverpool’s ex-coach Rafael Benitez, who had been released as Everton FC coach during the game.