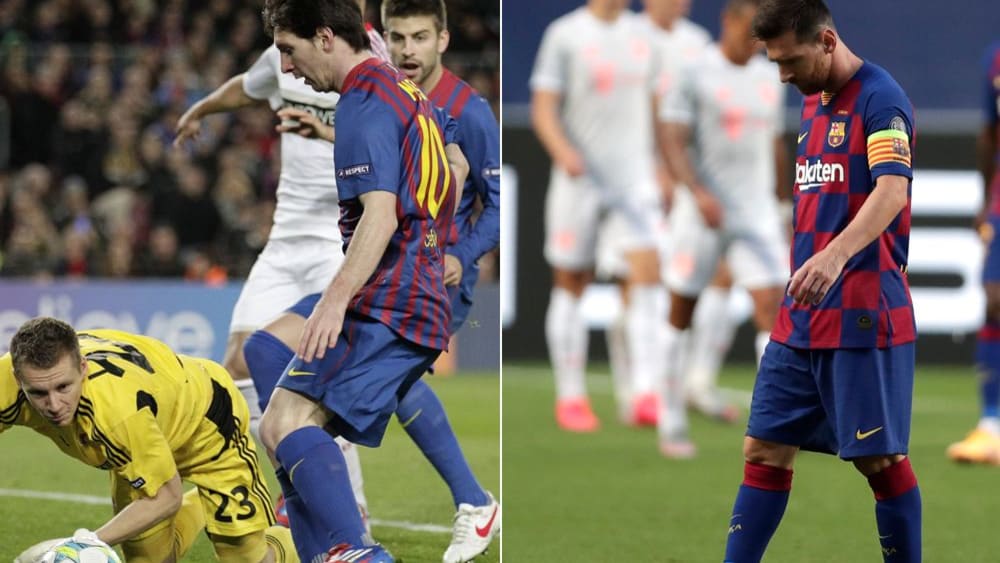 On Tuesday, Lionel Messi gets to know a new club with RB Leipzig. But how did it go for the former Barça striker against German teams? The Argentine shone frequently – but there were also two debacles.

Bayern? BVB? Leverkusen? No, the first German team Lionel Messi met in the Champions League was Werder Bremen. On 14 September 2005, the Barça youngster was substituted at the Weser in the 66th minute. “A giant talent enters the pitch: 18-year-old Lionel Messi comes on for Giuly. The Argentine is not yet eligible to play in the Primera Division, but he is allowed to play in the Champions League,” the Sports of the Day reported at the time.

In the 77th minute, Messi was brought down in the box after a one-on-one with Bremen left-back Christian Schulz, and Ronaldinho converted the penalty against keeper Andreas Reinke to make it 2-0. It took the “flea” eleven minutes to score his first goal against a German team.

16 more duels with Bundesliga teams were to follow, and he scored his first goal – against Bremen. The following year, Barcelona also ended up in the group with Werder, and after Puyol’s own goal (56th), the Schaaf eleven thought they had already reached their goal in the preliminary round. But in the 89th minute, Messi, who had been substituted again, scored after an assist from Deco to make the final score 1-1.

Now the Flea started a little series. In the first meeting with VfB Stuttgart (2nd matchday 2007/08) he scored 2:0, as well as in the “Bayern debut” in the quarter-final first leg 2008/09 with 4:0 – even twice, and he also added a goal against Klinsmann’s team.

German clubs remained Messi’s metier, as he proved in the 2009/10 round of 16 second leg against Stuttgart (4-0, two goals) – and especially in the 2011/12 round of 16 second leg against Leverkusen. In the first leg he had already given the Dutt team a goal in a 3:1 win, in the second leg he was unstoppable. He scored five goals (!) in the 7:1 win at the Camp Nou, no one has ever scored more in a match in the top division.

Messi’s worst kicker grade against German teams to date was a 3.0 – but in the following match he scored a 5. In the 2012/13 semi-final first leg against Bayern, Barça disgraced themselves, but Messi went into the game with a 4-0 defeat and was not used in the 3-0 defeat in the second leg – and took revenge two years later. In the 3-0 win over Munich – another semi-final first leg – he scored twice and set up Neymar’s 3-0. Unforgettable how he kept Jerome Boateng off balance with a dribble at 2:0.

It was Messi’s last game against a German team so far. Now a new experience follows on Tuesday with his new team Paris St. Germain, against Leipzig. In any case, he has scored at least once against every Bundesliga team so far …

Messi’s record at a glance

Balance against Werder Bremen: Two games – one win, one draw (one goal, one assist)

Balance against Borussia Mönchengladbach: one match – one win (one goal)