3:2 after 0:2! Real win in Sevilla and take a big step towards the title 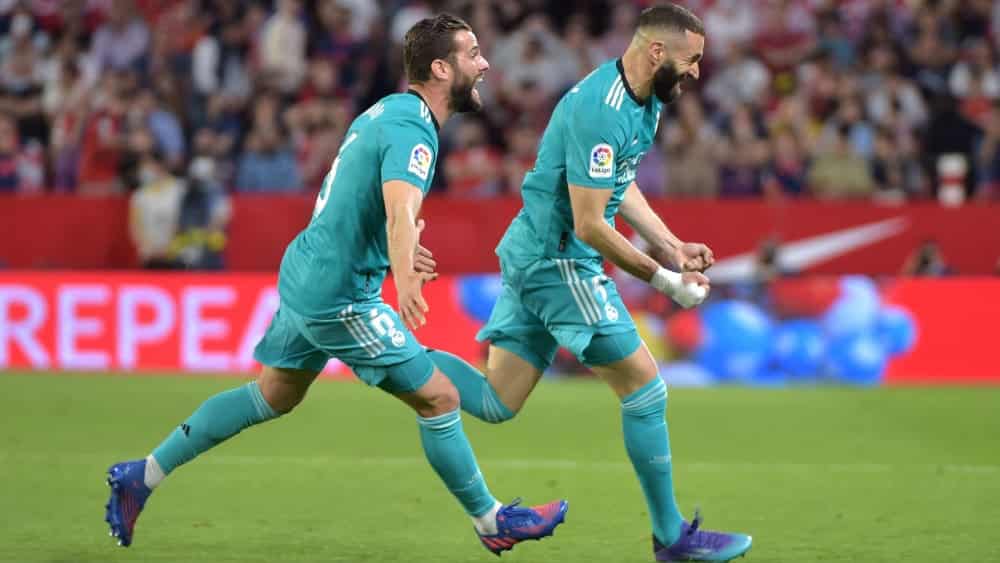 This evening, the top match in La Liga was on the agenda: Sevilla played a strong first half against Real and already led 2-0, but the royals rallied in the dressing room – and turned the encounter into a 3-2.

Sevilla had the chance to at least get a little closer to Real again – and with a win the Andalusians would also have helped Barcelona, as the Catalans also continue to lurk for slips by the royals. The game got off to a lively start at the Ramon Sanchez Pizjuan, with both teams playing forward and the first good chance coming from Martial, whose shot missed to the left (9th).

The Andalusians were the more active team – and took the lead after a standard: Rakitic’s free kick from 17 metres in a central position hit the left side of the goal (21.). However, the Royal wall was not worthy of its name, because Eder Militao rushed forward, the wall dissolved and the ball went through it into the goal. Real had a lot of trouble in this phase and conceded the second goal: Corona was quicker than Eder Militao and crossed the ball to Lamela, who slotted into the empty goal (25th).

A double setback for the leaders, who searched in vain for an answer until the break. The Blancos were lucky to start the second period with eleven men, as Camavinga, who had already been cautioned, knocked Martial down. Referee Guillermo Cuadra Fernandez judged that the French midfielder had touched the ball. But that was not the case. Martial then had to be substituted.

At the break, Carlo Ancelotti had obviously found the right words, and he also brought on an invigorating element in the form of Rodrygo. After Benzema had missed a good chance (49th), it was the Brazilian who pushed the ball into the net after Carvajal’s cross to make it 1:2 (50th). Real were now totally in control, had a lot of possession and locked Sevilla in their half – Benzema just missed the equaliser (63.).

Nacho and Benzema turn the game around

The home side were almost completely unable to get anything going forward, with only the men from the Spanish capital playing. Vinicius Junior scored the supposed equaliser, but it was disallowed due to a handball by the Brazilian, which did not change even after watching the video footage (74th).

But the equaliser was to come, the substitute Nacho scored after Carvajal’s preparation (82nd). That was not enough for Real, the league leaders continued to play forward, desperately wanting the three points. Sevilla could hardly get out of the back – and had to swallow the third goal: Rodrygo found Benzema at the five, who was too free and scored dryly for the 3:2 final score (90.+2).

Real now have 15 points more than Barcelona and Sevilla. The Catalans, however, still have two games in hand and could at least close the gap to nine points.