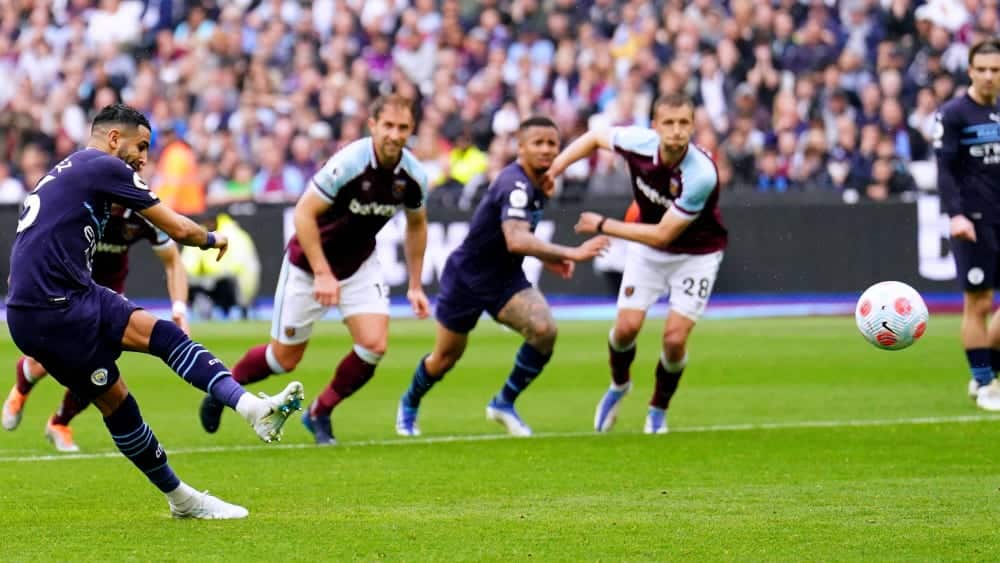 Manchester City remain top of the table but threw the door open again for Liverpool with a dramatic 2-2 draw at West Ham. The title may be awarded on the final matchday.

Emotional action began before kick-off as West Ham fans paid tribute to club icon Mark Noble at their last home game, bringing tears to his eyes. He may have had to rub them on the bench when it was his team-mates who almost took the lead against the leaders through Dawson’s header (4th).

David Moyes’ side were expected to dominate the ball and counter-attack dangerously from a solid defensive position, while City’s scoring threat was limited to long-range shots. After a double chance by Rodri (22nd) and Fernandinho (23rd), West Ham’s approach proved to be more effective: Bowen got around Ederson on the counter-attack and scored the 1:0 (24th).

The Skyblues first had to collect themselves, however, to unleash powerful pressure shortly before the break: Rodri (34th), especially Gabriel Jesus (36th) and Mahrez (37th) had very good chances to equalise, but it did not happen. Instead, it rang again on the opposite side after a long ball, Antonio sent Bowen through Fernandinho’s legs to score a brace (45th).

City started the second period more forcefully – Grealish scored a timely deflection to bring the visitors back within a goal (49th). Constant pressure from the favourites was somehow a permanent state of affairs, but West Ham continued to keep the game open through good switching moments. And City also created chances: Zinchenko and Fernandinho played wild wrong passes in their own penalty area, which Bowen (61.) and Antonio (65.) did not punish.

A little later the Hammers somehow punished themselves: Coufal headed a free-kick from Mahrez into his own goal and gave City the unexpected equaliser (69.). For a long time, the game went back and forth, because West Ham (great chance Bowen, 75th) was also playing for Europa League participation. Towards the final whistle, however, only City played, who were awarded a penalty after a foul by Dawson on Gabriel Jesus.

Mahrez stepped up, having converted all four of his Premier League penalties so far. The Algerian chose the right corner but did not shoot well enough. Fabianski saved (86th) to potentially keep the championship race open – if Liverpool win at Southampton on Tuesday. West Ham, meanwhile, failed to leap past Manchester United into sixth place in the Europa League.

“One of the most reliable defenders in the Premier League”: Everton sign Tarkowski