HomeEsportsVBL Grand Final: 'Stylo' stumbles over Swiss Round - 'levyfinn' with a...
Esports

VBL Grand Final: ‘Stylo’ stumbles over Swiss Round – ‘levyfinn’ with a clean slate into the knockout phase 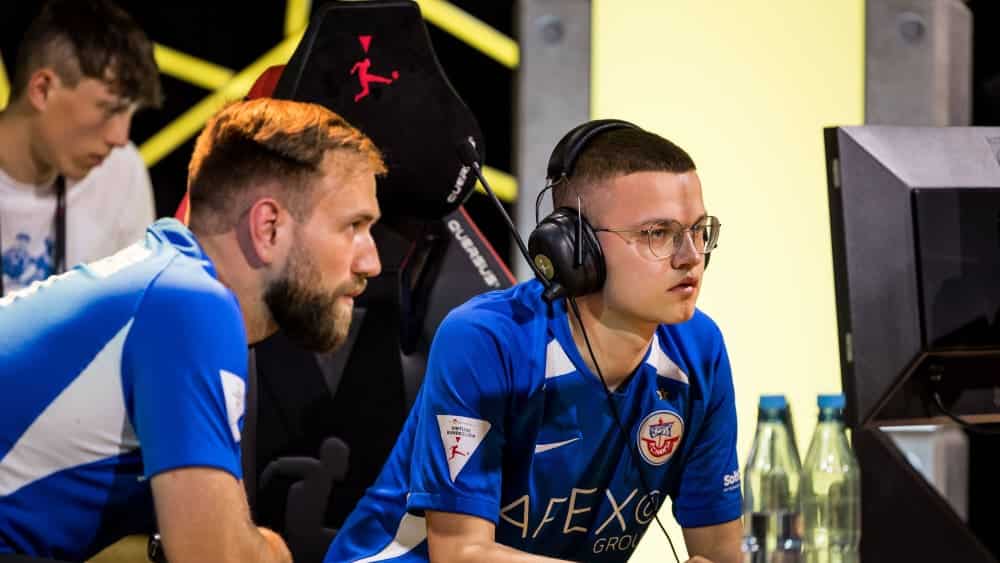 On Saturday of the VBL Grand Final, favourites struggled and stumbled. Only one season newcomer stormed straight into the knockout round with four wins – Rostock’s Levy Finn ‘levyfinn’ Rieck.

Although the opening match of the VBL Grand Final on Saturday in the XPOST in Cologne was still played without spectators, the rows of chairs were nevertheless well filled. Family, friends and teammates of the players repeatedly provided an atmosphere worthy of the final.


This was mainly due to the sometimes very close matches, which were often decided in extra time or even in a penalty shoot-out. But the Swiss system also played its part in the exciting constellations. Those who won four matches were sure to reach the knockout round, while those who lost three times were out of the tournament.

So everyone was able to taste a little emotional appetiser. Some knew how to make perfect use of the special offline situation.

Such as Deniel ‘Denii10’ Mutic. He has three wins in three rounds. This gives him the best chance of making it to the PlayStation knockout round. The icing on the cake: in the first match, the Heidenheim player beat the defending champion and top favourite Umut ‘RBLZ_Umut’ Gültekin 6:5 after extra time.

The latter, however, impressively got back on track in rounds two and three. An 11:1 win over Leroy ‘Leroy_1892’ Richter and a 6:3 win over Lukas ‘Lukas_1004’ Seiler pushed the eChampions League finalist Gültekin back up the table. However, the majority of PlayStation players will have to wait until Sunday for decisions. Connection problems with the EA servers postponed the fourth round to Sunday morning.

Surprising, however, is the winning streak of Bremen’s eACADEMY talent Jamie ‘SVW_Chaser’ Bartel. With Timo ‘TimoX’ Siep he defeated one of the top performers of the past VBL Club Championship in the first round on PS5 with 4:3 after extra time. Two narrow victories over ‘Lucas_1004’ and in the penalty shootout against Jannis ‘JISTENNSQ’ Pütz give the young Bremen player an excellent starting position.

The only decision of the day on PlayStation: Hertha’s ‘Leroy_1892’ and Thomas ‘xThomas_om’ Ostermeier have to bury all prospects of reaching the knockout rounds after just three rounds.

‘levyfinn’ – Xbox rock in the surf

It could storm whoever wanted, Levy Finn ‘levyfinn’ Rieck stood like a rock in the surf. His list of victories already reads like the tournament tree of a full-blown favourite.
Neither Philipp ‘Eisvogel’ Schermer and Michael ‘MegaBit’ Bittner nor ‘RBLZ_Gaucho’ and Tim ‘TheStrxngeR’ Kattnawatos were able to do any decisive damage to the Rostock defence, which stood unwavering like a dike in front of the Baltic Sea. As a result, Rieck emerge from Saturday as the only knockout round qualifiers with a flawless 4-0 waistcoat.

“I don’t think there are any easy opponents,” said Rieck, but definitely takes away from the first day that he was successful against “quite a lot of experience. “

Matthias ‘Stylo’ Hietsch actually wanted to start the tournament with a win, “to get a good feeling and be able to swim on this wave.” However, he suffered a 4-0 defeat in his first match against Michael ‘MegaBit’ Bittner.


The coach of the German eNational team also struggled to ride “this wave” in the aftermath. He got his only victory against Steffen ‘Funino’ Pöppe from Hamburg. The latter was surprisingly eliminated after three defeats in three rounds.

Eisvogel’, the free agent ‘LOB_Cedi’ and, surprisingly, the German ePokal winner Mustafa ‘FCSP_Musti’ Cankal also had to go home. The St. Paulian never found the right entry into the tournament. The only Pauli hope thus remains Kamal ‘fcsp_kamal’ Kamboj’, who extended his tournament stay for the time being with an overtime win against ‘xThomas_om’ in the third PlayStation round.

The VBL Grand Final enters the home straight tomorrow with 500 spectators. The final for the German FIFA Individual Championship is scheduled for 7:05 p.m.