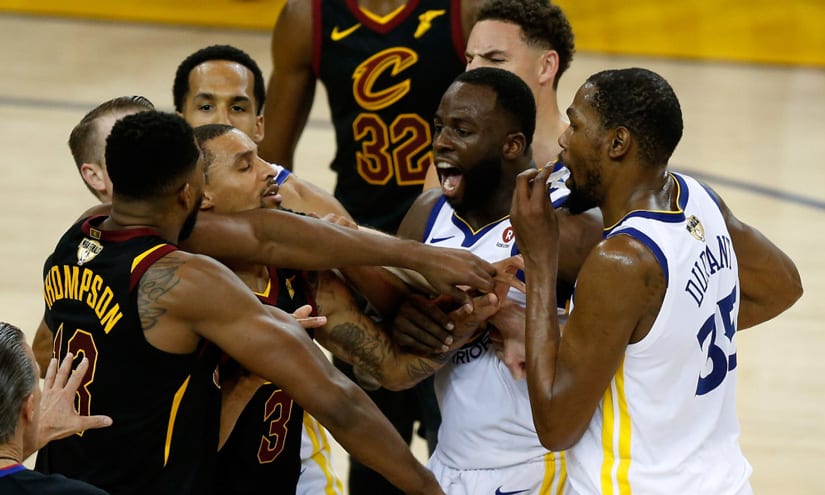 The exclusive ESPYs afterparty was organized by LeBron James. Phones and cameras weren’t allowed, which is why we might be hearing about this two weeks after it happened.

“They want a political answer but the fact of the matter is we just cut from a different cloth,”

Meet me outside – Tristan Thompson after the NBA Finals altercation

Tristan Thompson and Draymond Green first got into it during Game 1 of the NBA finals when Green applauded the referee’s decision to eject Thompson for a flagrant foul on Shaun Livingston. Thompson took exception to Green’s reaction and the pair got into an altercation before being separated by teammates. While Thompson was being escorted off the court, he offered to meet Green outside.

Draymond Green had this to say after the game:

“I can’t meet him outside here, ’cause I’ll still get fined,”

“But I can meet him in the streets any day.”

Thompson was later fined and suspended for Game 2 of the Finals.

All this didn’t go down well with Cleveland’s power forward, who obviously still held a grudge on Green. As per reports by Big Lead’s Jason McIntyre and Hip-hop blog Bossip, Tristan Thompson “sucker punched” Draymond Green “out of nowhere” and the two had to be separated by none other than LeBron James and Kevin Durant. The party then went on as if nothing had happened.

There’s no love lost between the two, that’s for sure.